She ran through the forest, their words replaying in her head.

“Strike it down” They had said.

The lying 'hero's' had hummed their agreements as they were fed.

She looked to the evening sky with worry as she continued on her journey.

“It's time to take down the beast” had called the village leader, Ernie,

shouted of agreement had rung as someone called “and we must hurry!”

“Yes! At nightfall, the beast will be sorry!”

She headed to the spot where they had spoken of its 'frightful' attack,

a tale everyone believed when they came back,

ignoring the marks they lack,

only focusing on upon a messily burnt sack.

The 'beast' rested in peace,

upon the sight of a little fire release.

Her eyes dropped with weariness, only to open alert a second soon,

at an addition in the sound of nature tune.

It seems this night of June,

is no longer a night of peace, on a full moon.

Even with warning the humans never learn,

it seems for their life, they lack concern,

as a fight, yet again, they yearn,

'so what should it be this time, I burn?'

She watched with amazement, as she grew close,

feeling neither the fear of an enemy or foe,

she 'silently' set down her bow.

Now she is here, her thoughts strayed to what to do,

She needed to cast a warning, that she knew,

but how to do that, she had no clue,

if only she thought of that too.

it's scale's, gleaming under the moonlight, shiny,

as the flame on its tail burnt brightly,

the only thing the 'hero' had said rightly.

feeling the focus of it's stare,

after it noisily placed it bow down, without a care,

To her, the child is a mere infant,

it's years and knowledge are far distant.

And is this how the humans are insistent?

sending a child when they failed, in their persistence.

Though with confusion, she questioned, 'why is it not fighting?'

Instead, it seems to be reciting,

seeming unscared of the tales of my biting,

made over time, in spiting.

Now that I am here, what do I say?

the child thought from where she lay.

To avoid alerting the beast she kept at bay,

but she knew she must act fast as it isn't long before the end of the day.

The dragon stood as she bit back her fear,

though the tales she heard, she did not think were clear,

she still felt more scared then she let appear,

but a warning she must tell before they come with their spears.

But how she was to give it?

She never did get that to that bit,

but as the dragon moved out of its perfect fit,

an idea in her mind, lit.

The creature decided, she would move on,

ignoring the infant with no brawn,

but as she is almost gone,

she hears behind her a sound of something to which she is drawn.

The child stood in the ash,

left behind in the grounds gash,

where her fire had burnt with a quick flash,

to heat up the spot as the humans had dashed.

Watching curiously she waited, till the child was gone,

to see what she had drawn.

A picture of a fight to take place before dawn.

And upon her face, a smile is born.

The child smiled as she saw her success,

and as the dragon flew off, she let go of her stress,

now she can worry less,

'and I better get back and hide', she thought, 'or be forced to confess'.

The beast took off into the sky,

hoping this new dragon's tales will not turn into a lie,

which she thought with a sigh,

Click here to purchase items and prints of designs 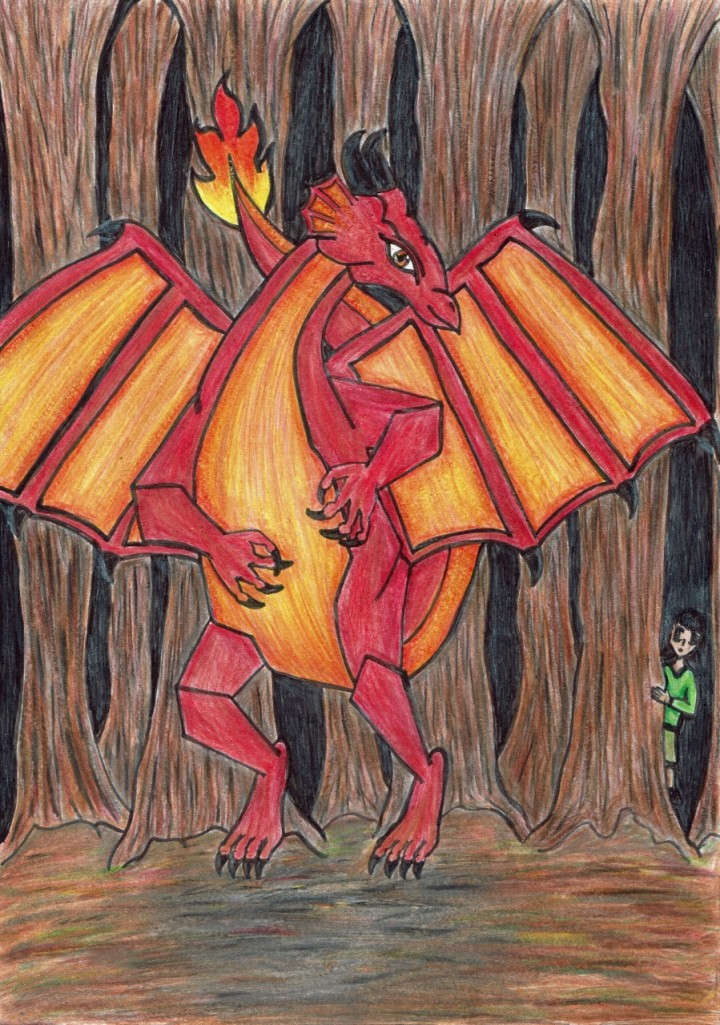 Just a storyteller releasing short stories as she attempts to finish editing her first full book, all the while attempting to put out a youtube video every week

See all posts by Storyteller IRT →