Digital Drugs: The Future of Pain Relief Is Electronic

by Will Stape 3 years ago in future / tech

Could your Apple Watch do double duty as a pain relief device? The future of pain relief is electronic.

Could your Apple Watch do double duty as a pain relief device? Maybe the next incarnation of the fitness tracker, The Fitbit, will be the go-to tech to help you endure your torn leg muscle from jogging too much or suffering from the dull ache of early onset arthritis pain. As wearable tech and digital devices become more affordable and powerful, we&rsquo;re happily strapping onto our bodies all kinds of wonderful electronic toys. In the medical field, digital pain relief for many kinds of common ailments promises to be only an app click away. All that quick relief and convenience sound great&mdash;but what, if any, are the potential downsides?

Pain relief devices such as The Quell work through established tech called TENS - Transcutaneous electrical nerve stimulation. The modern version of the tech has been around for 42 years, with the first wearable TENS device patented in the USA in 1974. With its supposed effectiveness and affordability increasing, it&rsquo;s becoming more popular all the time. However, could this nifty tech be mishandled, abused, or even hacked to become more powerful or possibly dangerously addictive? 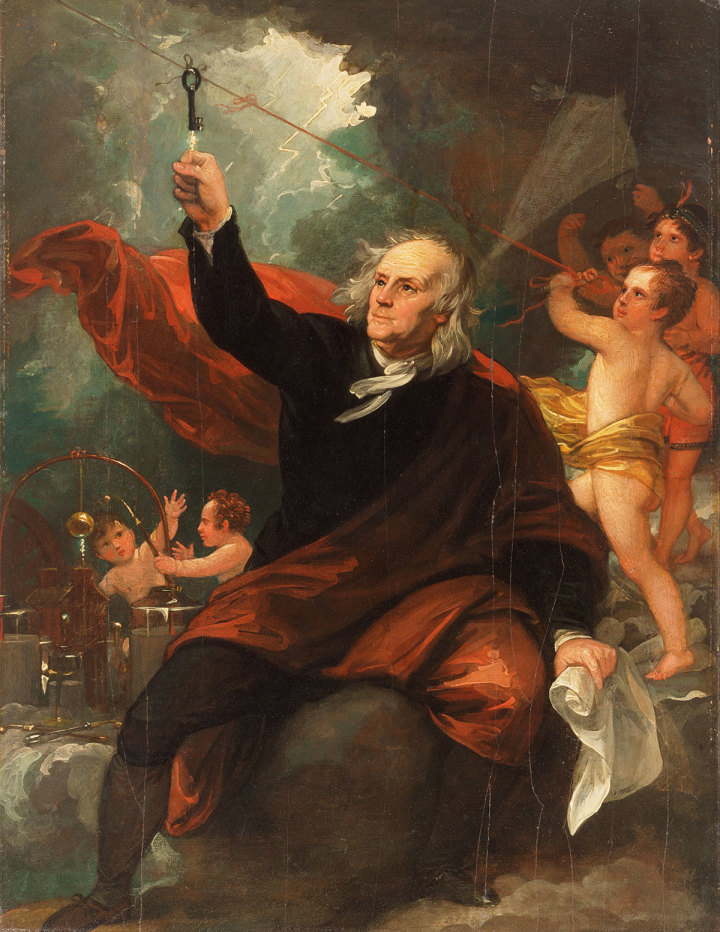 The ancient Romans are historically infamous for their legendary, bloody combat and gloriously decadent lifestyle of excess—but little is remembered of their early use of electrical stimulation for pain control. Roman senators, gladiators, centurions, and even the emperor himself didn't have access to modern digital devices or electronics, so they needed to go fishing. Or at least hit the beach and go swimming.

In 63 A.D., the physician to Roman Emperor Claudius, Scribonius Largus, documented something we’d find weirdly funny: standing on electric fish at the beach to alleviate pain. It’s not said how much the fish complained about someone stepping all over its electrically charged body, but evidently the act was effective enough for it to be endorsed by the emperor’s doctor himself, and documented for posterity.

Ben Franklin, scientist, inventor, and American founding father, knew something about electricity. After all, he’s the father of the lightning rod. Franklin was a believer in using electrical stimulation for pain relief, and he was one of the first to experiment with the therapeutic technique by using early, primitive batteries to quell pain.

All this early work experimenting with the basic TENS concept led to the technology that we now utilize in clinics, hospitals, and in the home today. 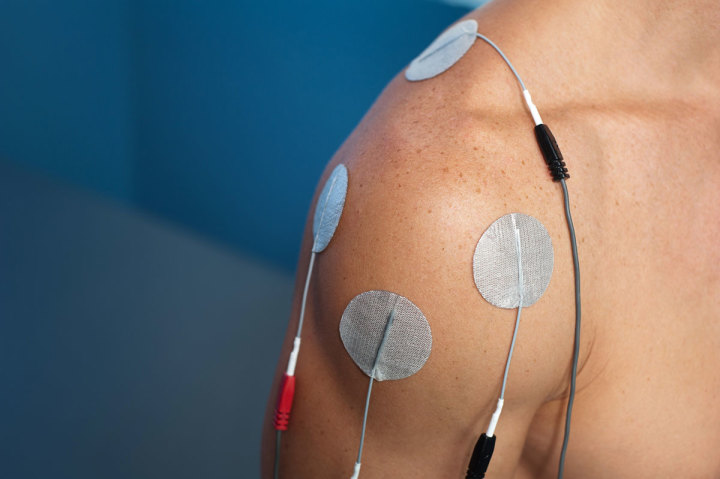 For such a complex sounding process, using TENS is relatively easy and affordable. The device is about the size of a smartphone and it uses electrodes embedded in patches to place on the skin. Once situated over the target site, an electrical circuit of impulses is created. The electrical impulses travel along the nerve fibers, and for many people less pain experienced is the result.

The exact reason why TENS works isn’t definitively understood—one theory is the electricity blocks the pain impulses to the brain, another is the stimulation of the nerve fibers coaxes the body into producing natural painkillers or endorphins. Whatever the actual reason why TENS works, the simple fact is that it does work wonderfully for many pain sufferers. People use it for a host of agonizing ailments, including: to combat osteoarthritis pain, fibromyalgia, neck pain, tendinitis, or bursitis. Cancer patients employ it to deal with the chronic pain experienced by their ravaging illness.

TENS has come a long way from those wacky Romans stomping around and terrorizing electric fish on the beach or Ben Franklin’s primitive battery experiments. Now, you don’t have to have smelly, fish feet. You can just order a TENS device on Amazon.

Quell is wearable tech, and at about $299.99, it’s an incredibly affordable way to experience the state-of-art in home available TENS technology. From the manufacturer's website:

“Quell is a 100% drug free, patented technology proven to fight chronic pain. Quell is FDA cleared for day and night treatment of chronic pain. Worn on the upper calf, it is designed for people with chronic pain such as low back pain, arthritic and joint pain, nerve pain, leg and foot pain, and widespread pain.”

Headaches are no fun for anybody, but migraines torture as another world of bestial pain. For those who suffer from them, standard drug therapy is prohibitive or simply ineffective and other techniques seem inadequate to escape the torturous, chronic condition. Now, modern tech arrives by utilizing TENS on a head mounted device, and it’s helping migraine sufferers.

Cefaly is a device designed to alleviate migraine pain. What exactly is Cefaly? From the official website:

"Cefaly is an External Trigeminal Nerve Stimulator (e-TNS). An adhesive electrode is placed on the forehead and the Cefaly is connected magnetically to this electrode. Precise micro-pulses are then sent through the electrode to the upper branch of the trigeminal nerve preventing future migraine attacks. Since 2008, Cefaly has been the subject of a number of clinical studies demonstrating its effectiveness and safety."

The device is aimed at migraine sufferers who have frequent bouts of pain and who can’t sustain a regular program of drug therapy.

The Future of Pain Management 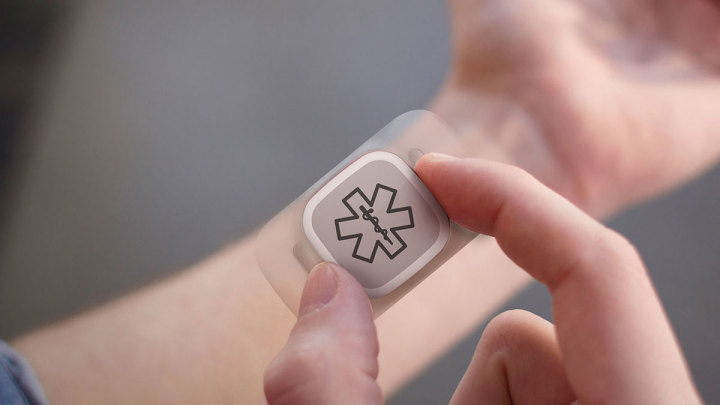 What’s in store for us when it comes to digital pain management in the future? Will narcotics given orally and by injection be a thing of the past? Perhaps, more importantly, what can be foreseen when it comes to the abuse, misuse, and exploitation of the emerging field of digital drug tech?

For one thing, TENS may not be effective at all when it comes to certain kinds of chronic pain; for example, when suffering from a bad back. In the 2009 issue of Neurology, new guidelines were published, and the lead physician, Richard Dublinksy, M.D., stated: "Physicians are advised against ordering TENS for patients with chronic low back pain since it is proven not to work.”

However, there’s some disagreement over the accuracy of the guidelines. Two prominent German doctors, Andreas Binder and Ralf Baron, M.D., commented on the guidelines thusly, "[A]bsence of evidence is not evidence of absence," they wrote. Although the research on TENS may be thin, they said, "there seems to be considerable empirical evidence that, at least in some patients, TENS is useful."

Of course, it’s often the case people will do whatever they want, especially when it comes to their health and how they feel about their own personal struggle dealing with chronic pain. They don’t always use pain pills or other pain treatments as uniformly as a physician prescribes. Expecting them to use digital equivalents in a more responsible way may be idealistic. Overuse or abuse is always possible with anything, but what about modifying or hacking the tech?

Overusing the tech can cause the exact thing the user is trying to banish—pain. Moreover, if the intensity is too high, it can cause muscle soreness. Skin irritation can also be a problem, if good hygiene and the cleaning of the skin isn’t observed. These are the most common and basic cons of using the tech, but what of future things we can barely even imagine?

Cell phones are rooted by the owners and our computers are hacked by strangers. Websites are hijacked and modified and servers are invaded and compromised. By human nature, people love to tinker with technology. The notion that these personal pain relief devices can’t be the target of some kind of outside interference—either intentionally or not, is naive at best. Perhaps with some innovative experimentation, the hacking of such devices will prove beneficial to the user and the medical community at large. We can hope any hacking or modifications will only lead to improvements in the implementation of the tech, and not go down a dark road of harming users of digital drugs.

futuretech
Will Stape
Read next: Understanding the Collective Intelligence of Pro-opinion
Will Stape