by Jesus Ponce 2 years ago in future

A Lingering Question for Humanity

Now I'm no scientist, but I've been very intrigued by the thoughts for future human civilization. I tend to wonder what our potential is as humans, and as we become more and more advanced in technology, what kind of heights we could reach. Of course, it may not be in our lifetime, but have you ever wondered how humans would be 500 years from now? Back in the early 1900s, people believed flying cars would be mass produced, or even that education would be "much more hi-tech." 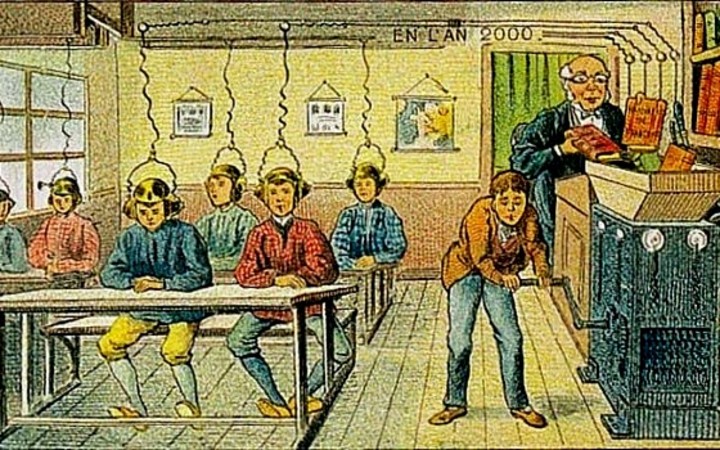 The following depicts an artist's prediction of the future of education.

As you can see these outrageous predictions are quite bizarre, and nowhere near accurate to our current time.

Thus, predicting the future is quite difficult. As far as research goes, however, space colonization has been the main area for scientific study, beginning with the colonization of the planet Mars. Being the most suitable, Mars has been a suitable candidate for quite some years now. With several Hollywood films such as Mission to Mars, The Martian, or Robinson Crusoe on Mars, the barren red planet has been a widely recognized place where humans may be able to expand.

There have also been other possible places to expand. Saturn's largest moon, Titan, has been another destination for possible human colonization. It's discovery of liquid on it's surface has encouraged scientists and astronomers to conduct further research.

Not to mention, in February 2017 Trappist 1 was discovered with a planetary system that could possibly support human life. A few of the planets lie within the star's "Goldilocks's Zone" or habitable zone, the location where surface temperatures are not too hot or too cold. Temperature ranges in this zone allow liquid water to exist on the planet's surface.

Now, what is the purpose for colonization of other planets or space in general? Well, one issue was brought up by theoretical physicist Stephen Hawking; human populations have grown exponentially in just a few years, and for whatever reason it were to continue, increased populations could cause food shortages, increased toxic emissions, etc..

Another problem that may occur is the "status" of the Earth and the Sun. The Earth is facing problems with rising surface temperatures, increased CO2 emissions, large-scale natural disasters, and of course the destructive behavior of humans. Secondly, The Sun—a star as we all know sooner or later will expand, swallowing up planets close by and finally going supernova leaving behind a dwarf star, or even a black hole. A dwarf star will no longer allow the planets to maintain there orbital tracks. They would simply drift off colliding with other planets, find a new system, or get lost in space. If a black hole occurred, all surrounding objects would simply get sucked in with no escape.

Although it may not be a factor in our lifetime, it is difficult to estimate when we may be running out, or even be out of time. Will humans continue to exist and thrive? Or will we be wiped out in an instant?

With these possible outcomes, space travel has taken its first steps. As we all know, it will not be done that easily and quickly. And if we do, we would have to be careful and cautious on how we execute our future actions.

If you believe in the existence of extra terrestrial beings, there may be more advanced races ahead of us in technology that could make us look quite minuscule. Or, if you played science fictional games such as Dead Space, scenarios like those may seem impossible, but the vast expanse of space is infinite, and with so much undiscovered, it is difficult not to ask: "What if?" or "What could possibly be out there that we do not know of?"

I grew up living with epilepsy, and with this I always resorted to the arts for relaxation and stress relief. My love for music is phenomenal, and my hobby to write stories to share to the world has always been a big dream of mine.

See all posts by Jesus Ponce →