by Steve Anderson 8 months ago in science fiction
Report Story 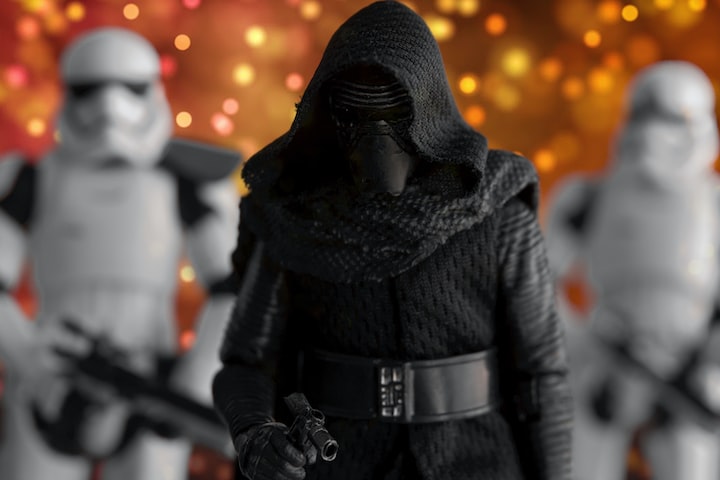 Photo by Michael Marais on Unsplash

This is a story of a beast, no, not that one. This individual will be intense, yet low-key, he will demand complete submission, yet publicly he will appear as docile as a dove. He's been with us all along; loved, respected, cheered, adored. Crowds flock to him, audiences quiver in their seats, longing to hear all he has to say. Presidents, kings and queens, leaders, dictators, they all succumb to his whims. How he rose to this place is a mute point, the fact of the matter, is that he is a tyrant. In a not too distant future, this beast will rise to a position of ultimate authority, he will command governments and armies. Through the force of his indomitable will, he has all his orders carried out without question, without delay. Those he commands will carry out the duties he assigns them. They will be ordained with the blessings of the holy church to transgress the laws of the church, setting themselves as the highest authority.

This beast institutes an agenda that has already been set in place. The world already conditioned to receive a never ending onslaught of vaccines to combat a virus that mutates at will, given a seemingly never ending number at the end of its collective name. This beast will unleash upon the world his ministers of collection and data, accosting all citizens of the world in an effort to assure that all, and I mean all, to comply.

The media will act as puppets to his whims; the Hollywood elite will scratch and claw at each other to outdo one another to be counted as supporters of the "plan". A never ending campaign of appearances by the "who is who" of the silver screen and the small screen, meant to keep the ardent fandom of followers content.

Through his interactions within governments and social media, he searches out all who dare oppose him and his actions. After all, isn't this for the best? Shouldn't all people receive the vaccine that will ultimately eradicate the virus? Though no one really ever gives an answer as to when this glorious event will occur, but, hey, trust them, they know what's best for you. In this future, no one will be immune to the search; young and old, rich and poor, the weak and downtrodden, the high and mighty; all will be called to perform their duty, take the injection. Why would you not partake in such a monumental undertaking? The survival of the species could very well be at stake. Never mind the footsteps of enforcers you hear at your door. It's all for your own good.

What of the powerful? Surely, they can smell a rat? Not so quick, my learned friend, this beast is shrewd, he will go after their status and launch a campaign to smear all who dare question the actions of the all knowing "state", such are the far reaching tentacles of this beast. They have seen this act before, and there is a reason why they have remained atop the mountain for so long; better to serve a tyrant then to be devoured by one. These guardians of self preservation will do all that this beast requires of them, the statue quo is at stake. Through their gracious generosity to the just cause at hand, they will influence others to accomplish this beast's agenda.

Those not so fortunate to have been born with a silver spoon in their mouth, will be persuaded down a different path; ahh, the paycheck! Do not think you can go on living your daily lives without conforming to the "norm", heaven forbid! That job you depend on to feed your family, pay your bills, keep your house or apartment? It's not that you cannot keep all the possessions you have worked so hard for and become accustomed to; but how dear fellow citizen, are you going to go to your mundane job unless you have received your "shot"? And that celebratory event you were planning to attend? Maybe next time, once you show proof of the mark you must carry in your arm.

What of the "malcontents"? those pesky, never-do-well, troublemakers? Many will flee the ever-caring, nurturing, benevolent confines of the "state", and attempt to set up "camps" outside the limits of the ever burgeoning over populated cities. Armed and well trained, these "camps" will offer resistance to the well-meaning dictates of the "state". These "deserters" of all that is good, will have the gall to speak out in opposition to the mandates of the caring establishment, offering an "alien" approach to the problems that plague the world. For this, they must surely be re-educated, it's for the best, for the continuity of the societal web. Great siege works will be enacted against these "camps". And with as much humanity as can be mustered, these misguided citizens will be given every opportunity to return to society; what a shame, no survivors were ever found.

But there are always those who suffer no encumbrances from the all knowing, all powerful "state". They answer to no government, no authority; they are, in fact, the authority! It is government who answers to them. They are the shadow in the open, the bridge to nowhere; silent, yet thunderous. They carry the weight of the world, they impose the "tax" to sustain the weight. They creep silently in and out of all that makes the world turn. They are no one and everyone, the seducers of all that occurs, they impose their will upon all things they desire to occur. Completely out of character, these charlatans come crawling out of the shadows, a spring of water erupting from the desert. They line up in droves behind the mechanisms of this beast; in a show of complete solidarity, they profess publicly their admiration of the "other".

This beast, now completely in charge, seemingly with all opposition crushed, will come before the masses in a worldwide broadcast. All will be his audience, all will be required to tune in. Emotionally charged and with sincere intent, he will muster forth words of encouragement and understanding. Such are the times we live in; misery, despair, the loss of loved ones, the absence of employment, cities lie in turmoil, crime at an all time high; the "state" continues to address all these issues, still, disease and pestilence runs rampant. Now is not the time to force anything upon the citizens of the world, no, now is a time of reflection. In a begging gesture, hands clasped together, he pleads with his fellow citizens to come forward and receive the gift of "cleansing". To save a dying planet, we all must do our part. Churches and Mosques, Synagogues and all places of worship have volunteered to assist the throngs of citizens who come forth to take the "cleansing". In a show of complete and never before seen solidarity, religious leaders take the podium with this beast. Now is the time to eradicate the enemy, this disease that plagues the world, now is the time to come forward and take your mark and stand side by side with your brother and sister. United we stand!

But please, do not rest on your laurels, there are those who will remain resistant; they must be searched out and brought before the authorities, it is for their own good. This must be done in love, they must be shown the error of their ways, they must be educated.

What happens to these "resisitors" is never mentioned, do not worry, they are in good hands. Though stories are picked up sparingly on rogue internet channels, showing roving bands beating and pummeling people on streets and open spaces, back alleys, parks; it can only be surmised that perhaps, the victims are the remnant of the resistance. Nary a word is mentioned on news broadcasts. "Conspirators" will stop at nothing to come against peace and security.

The great command comes forth, in proclamation, enacted through law; a small needle prick to the right arm, specifically the hand. Oh, what great joy, the eradication of disease! The "other", the great leader of the movement, comes forth in these times of peril, he stands beside this beast and gives his blessings upon such a noble and wonderful work. The "other" speaks and all are mesmerized, never have such elegant words come forth with such promise. With the eradication not of just this virus, but to a whole host of killers, the promise of long life, dare say, immortality, looms on the horizon! With the promise of longer life spans, nothing appears to be out of humanities reach. Long live humanity!O

On a side note, reports of people apparently changing in their physical appearance is met with skepticism and derision. Talk shows have guests claiming their physical features have "hardened". Never mind the host of the show mirrors the appearance of her guest, deep lines furrow into their foreheads, an obvious angry countenance betrays both their personas. most likely not enough sleep last night. Nothing to be concerned about...

I am a career paramedic about to enter into my 36th year of service to my community, I have been blessed to witness and experience events that would make most people blush and run for cover. I hope to incorporate these moments into stories.

More stories from Steve Anderson and writers in Futurism and other communities.