by Jojo about a year ago in fantasy
Report Story

the story of ants, unknown to humans. 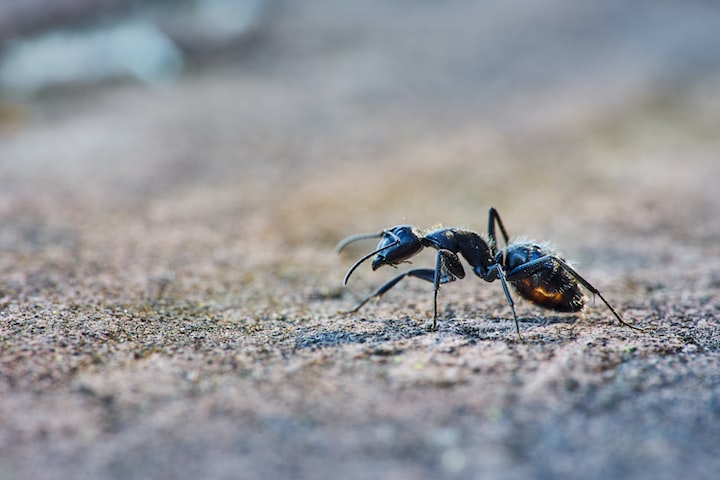 Photo by Wolfgang Hasselmann on Unsplash

Every journey begins with the first step, and every journey ends with the last step. Everyone knows this. What they don’t tell you is how grueling each step can be. The tiredness that comes with walking, trying, living. How can life be so special when it is just so much work. All. the. Time. Today is day number whatever of Archie continuing his journey. Since he was tasked to find a new home for his hive, he has been growing more fatigued with each passing moment. But, even with the growing desire to just quit and find some nice sunny spot to carry out the rest of his days, he simply cannot abandon the few ants that cared for him. Moreover, while Archie will never admit it out loud, he is proud of the fact that he is the only one brave enough to venture out into the darkening world.

Each day the world seems to be growing darker and colder. The elders have told Archie that this will pass once the darkest and coldest day is over. Apparently it’s some kind of cycle. But Archie feels with every millimeter of his body that there is something more sinister is at hand. Every week, the colony is seeing less and less food. Every week, the Queen orders for the gathering radius to be reduced. Officially this is so the Queen has more time to train Alissa, who is in line for the throne. But the rumor is that the Queen is scared. Everyday more and more news arrives about the bizarre behavior of the giants. Some ants have claimed to see once green communities suddenly devastated, leaving only dirt and rubble. These ants were ostracized and laughed at for their “crazy antics”. Even the Queen has ruled them to be untrustworthy, and publicly announced the giants are of no threat to the colony. Archie knew better, and he knew Alissa knew better too.

While running around a patch of grass, Archie and Alissa met an ant from the Sorrian colony, once friendly to the Elisyius colony. The queen has stated that the Sorrian Colony has decreed war for resources. In order to “protect the citizens”, only special soldiers were allowed to travel to the hill. However, this ant was dying. The only thing the dying ant could say was, “Fake war, dead hill”. The hill mentioned, Alissa thought, may be the hill of Belavion, the hill separating the two colonies. On top, an ant can see the entryway to both colonies. Out of curiosity, Archie and Alissa raced to the top of the Belavion hill, a hill forbidden by the queen. Once there, both of them could see why. The once mountainous entry way into the Sorrian colony, flattened. The grass was gone. The flowers were gone. And the Sorrian ants were gone. The horrific view was as if something or someone had magically dug up the whole area of the colony, leaving no sight of green, but only the once inner walls of the colony.

Archie couldn’t sleep for days. The world is changing; that is no longer a crazy idea. Who knows when the same thing is going to happen to the Elisyius colony. He tried to bring it up to the queen with Alissa, but the Queen dismissed them. Archie wasn’t allowed to see Alissa for a few days after that. When they finally were able to see each other, Alissa had to sneak out in the middle of the night.

When Archie saw his friend for the first time in days, she was distraught, but understandably so. “The Queen has gone mad! She refuses to listen to reason! I have been banned from speaking of anything she calls as ‘madness’”

“Well, it’s not like you can do anything right now. You’re not in power.”

Alissa stares into Archie and smirks. “This is why I have decided, we need to do what we must. I made a plan!” Already Archie could guess what that plan is. If caught, both of them would probably be executed out of treason, but a quick execution may still be better than seeing everyone die around him.

“You want to commit treason?”

“Not want. But it is not like we have a choice, the queen must be disposed of”

“Okay.. and if we succeed, what then? You think we’ll be safe from whatever happened to the Sorrian colony?”

“I am not dense. I know removing the queen from power will not change our wretched fate. But what may change it, is you. I say that you need to search for a new home. And I know moving a colony is not an easy task, but i say it is our only option.

The conversation didn’t last much longer than that, nor did it need to. The plan, while difficult and complicated, was still simple at its roots. Archie will find an area far away from the giants and safe from whatever happened to their neighboring colony, and Alissa will speed her crowning processes up.

The next day, Archie snuck out of his familiar home in the search of something new and safer. Unfortunately for him, he didn't know how long it would take nor that he would have to transverse through the land of the giants, for he has learned his colony is surrounded by Giant territory. But he continues on to save his colony, one step at a time.

I often find myself at peace when I'm around areas with lots of people like cute streets with coffee shops. I love the thought that everyone is simply living their lives as best as they can.

More stories from Jojo and writers in Futurism and other communities.