A mini-story focusing on environmental storytelling 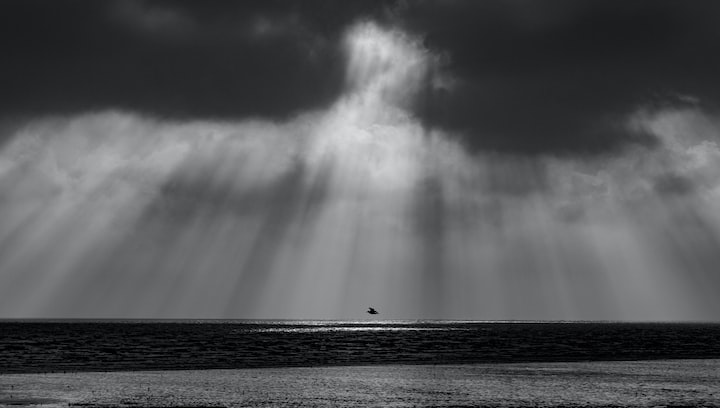 I fell. Through miles of empty sky I fell, my angelic armor strengthening gravity's hold, propelling me faster. With it's thrusters off, I was another dead hunk of debris filling the sky. Through my visor I can see tumbling sky, changing from serenity to war and back again. My reverie was only broken when warning lights began to flicker, and then the buzzers came, surrounding me with madness.

"What's happening?! Why are we freefalling?! Boot the thrusters, straight-" her voice began, howling for survival, to cry against the inevitable.

"Sshhh..." I whispered, quietly. The voice stopped short, the warning buzzers dimming an octave. My eyes closed, and I could vaguely sense them dimming further as she felt my more intimate presence with my mental dive. I could sense their fluctuations slowing, feel the circuitry firing. I could detect my tumbling in far more perspective, but it was slowed as my thoughts sped up, rising in pace to our middle ground. I could feel her fear as we met.

"Sshhh," I murmured again, meeting her panic with the same measured calm that I always had. Slowly it subdued under the strength of my peace. "We fall as we are meant to, sweet thing. Our part is done. We have only one task left to us." I pressed against the new burst of emotion with my stone resilience, waves to the cliff wall, and the buzzers fell silent for it.

"Why are you okay with this? Aren't you mad? Don't you want to fight?" she whispered. "Mad?" I responded, and allowed myself a smile, "I'm deeply appreciative. My work is done, my crown sits light. I am at ease."

She thought on my response for a moment, growing still and silent for the duration. "...Are we going to die?"

"Yes. Only the final task remains, and our velocity will ensure it is done well." Measured silence. She had began to match my example.

I considered the prospect. The holy scripture had never spoken of what it was to die with your Iron Halo. What it meant for the Iron, at least. "...Perhaps. I believe I would like that. You have worked for this," I offered, a minor consolation.

I pressed to the core. I could feel her do the same as it thrummed to life, warming, heating, boiling, overcharging itself to an impossible to contain mass of energy. The ground was drawing near.

More stories from Tristan Mayo and writers in Futurism and other communities.