by G.F. Brynn about a month ago in science fiction

Book 2 of an Illustrated Sci-Fi Trilogy

Books 1 & 2 (to date) can be read at: Deep Sky Stories & Illustrations

Doctor Jessica Bradshaw worked late at her lab that night, but when she finally left for home, she felt none of the usual heavy fatigue that a day of hard work at the hospital brought. There was a tingle, an excitement which mystery will always bring into a person's life once it is found out.

As she sped home in her Pod-Bike, casually peddling to assist its energy-sipping electric motor, she kept mulling over how it was that an otherwise normal young boy, living on the outskirts of small, quiet Delta-Town could present her with such a wonderfully strange mystery. She put her bike in Road-Recognition Mode and spent the next few minutes reviewing her dictated notes that she made earlier that day. Scrolling down the dimly glowing green LC3-D screen being holograph’d through the triple-screens of her cell-phone, she found the lines of text which interested her.

She read,..."if this trend in Alex Faraway's metabolic growth continues, I can foresee an unusually higher than average lung capacity." "Not only that but the atmospheric properties that his lungs will be asked to metabolize will be far more diverse within the chemical spectrum than normal lungs are capable of." "There's nothing physically obvious about the boy, at least not yet...but judging from the deep physio-cellular scans that were done, there seems to be something odd happening in his hormonal system." "There seems to be a remnant tissue here which I've never come across before." "It's almost like there is a foreign chromosome in the boy's body...but his body is accepting it anyway." "And this tissue, it's behaving like a disease which isn't a disease...this is very bizarre."

"A disease which isn't a disease", she mused thoughtfully to herself. "A mutation?" She remembered briefly studying how mutations or cancers could grow in a person's body after their exposure to different wave-lengths of electro-magnetic radiation. She knew the basics; that the earth, indeed the entire universe was being constantly bathed in very mild background radiation left over from the Big-Bang. This outflow of radioactivity began 4.5 billion years ago, when the universe as we know it was born.

Since all life on Earth had always grown and evolved within that constant, mild radiation, the plants, animals, and human beings existed as equally healthy and "normal" life-forms.

One example where a mutation or "abnormal" cellular growth could happen though was in cases where any life-form came into close or direct contact with ionizing radiation waves which were too powerful for its body cells to cope with. Depending on the dosage of the radiation or the length of time a person was exposed, mutations, either mild or severe could occur. These high-radiation mutations within the body almost always lead to some form of radiation sickness or cancer. Whether from a high dosage or from exposure for too long, the resulting illness could be either moderate or fatal.

"There must be something which the boy is in constant contact with which is giving off radiation waves that are triggering the remnant or throwback organ in his body to grow", she mused out loud. Another thought then came to Jessica which seemed impossible yet also explained another part of the mystery that was Alex Faraway. Could it be that the throw-back organ that was causing the abnormal change in his lungs, and probably his body as a whole, was a mutant as well as a remnant organ? Something other than human? No...it was too much, that was going to far into the fantastical. But still, it could explain why Jessica found no signs or symptoms of cancer at all when she examined Alex. Except for his episode of breathing difficulty, the boy was otherwise strong and full of health.

Perhaps the mutation had always been there, lying dormant. Then something...something which the tissue recognized as part of it, caused it to awaken and become active again. But then, that other ‘something’ would need to be just as abnormal or ‘alien’ to human physiology as well. Something alien which could trigger an equally alien but non-fatal response or change within Alex Faraway? Doctor Bradshaw shut her eyes and shook her head as this new, unforeseen revelation now took root in her mind and grew more relevant the more she thought about it. What if? What if this slight alien-ness was something which was genetic as well and was being passed on from generation to generation within the Faraway family?

"Oh...it's been too long of a day, my head aches", Jessica sighed as she put her head back against the softly cushioned bucket seat and peddled the little speeding hybrid bike along the gravel country road. The enclosed, bullet-shaped cockpit protected her from the blustering rainy weather and a small wiper-blade moved rhythmically backward and forward along the entire length of the curved plexi-glass windshield. Highly sensitive Road Recognition Sensors kept the sleek little vehicle well on the road and safely avoiding any other vehicles (or farm animals) which could be happened upon as well.

The minutes dragged by quietly and Doctor Bradshaw even nearly fell asleep. Then, without warning, something bright flashed outside the cockpit and to her right.

What was that, a flash of lightning?

Jessica opened her eyes and looked from side to side, hoping to see it again. She didn't have long to wait. Another bright, sparking flash pierced the darkness from only half a mile away. Jessica shielded her eyes in surprise but kept looking off to the right. Familiar large, dark mounds and shapes piled high, just off the gravel road meant that Jessica was now passing by the old, abandoned scrapyard. She commuted passed the vast, tattered and dusty dump everyday without much thought of it at all but now, Jessica remembered that the Faraways lived in an old house beside the scrapyard. What a deserted and dismal area it all seemed to be.

Yet something fell together in her mind which Jessica knew needed to be pursued, if only for her own peace of mind. "I should check on that boy, just to be sure", she said to herself.

With that reasoning in mind, Doctor Bradshaw made a split-second decision as a side-road appeared in the glow of her bikes nose headlight. Veering off the main road and onto the narrow, pot-holed gravel lane, Jessica gritted her teeth as the ride suddenly got much bumpier.

I just hope I'm not waking anybody up at this time of night, she thought suddenly.

The small glowing clock on the dash of her bike clicked over to 11:00 in small red numbers. Come to think of it though, who could sleep very well during such a lightning storm anyway? There was something odd about the lightning though - there was no thunderclap to be heard. In spite of the lightning, the night outside was unusually silent.

"How very strange", Jessica whispered with uncertainty creeping its way into her thoughts. 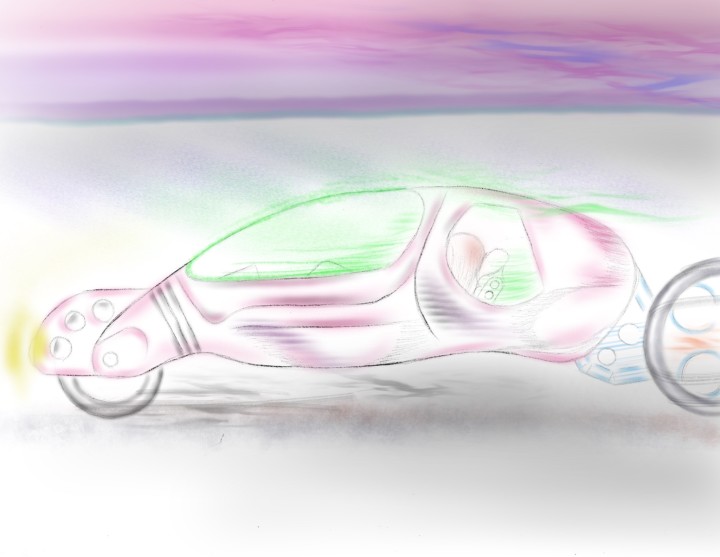 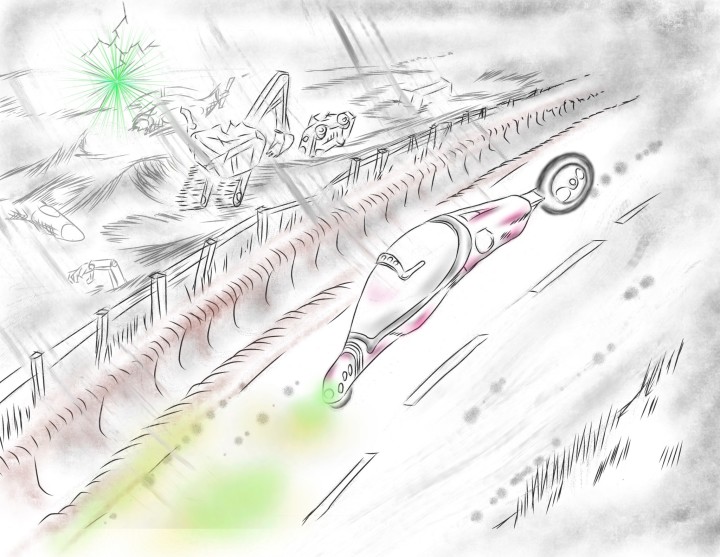 A flash of light from the scrapyard startled her! Jessica turned sharply off the main road to investigate.

Elizabeth Faraway is having the strangest dream. In her dream, there is a boy who looks like Alex, but isn't quite because of his Asian eyes and odd hair-quills. Alex is lost within an endless maze and the boy is desperate to find him. But, that is not the worst of her restless dream...

G. F. Brynn is a self-taught writer & illustrator whose sci-fi stories weave a rich blend of youthful adventurism with ancient myth-fantasy. The characters move in a world in which the divide between dream and reality is thinly shaded.