A Matter of Minutes

by K.Hartless about a year ago in science fiction
Report Story

Each person must earn their right to stay alive 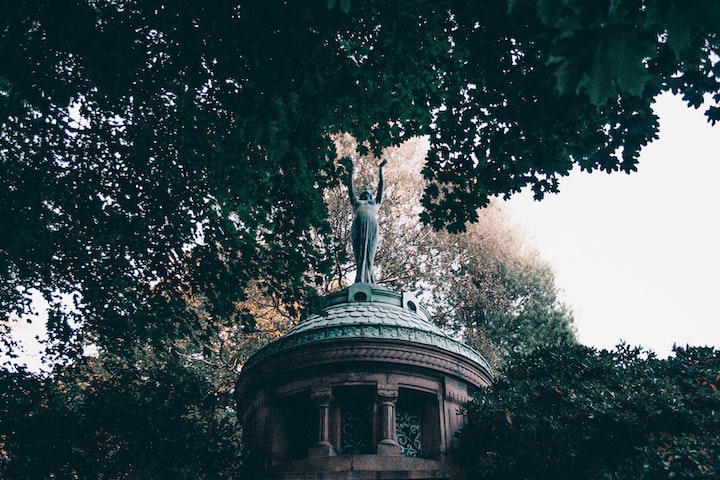 Photo by Aron Fjell on Unsplash

Lifelockets don’t come off by accident. They don’t rust, weather, or oxidize; they endure even after teeth and bones decay. They can withstand gas leaks, nuclear explosions, and dips in Earth’s few remaining lakes, murky brown from chemical waste.

The heart-shaped pendant is issued at birth. The keepsake is soldered onto the neck of each newborn, and the contents of the compartment sealed shut.

Life lockets mean no fake identity or unmonitored movements, but more importantly, they mean that credits are the most important currency.

“Get married, Leo. It's trip. creds right now on the Spanner.” Denise is scrolling the Life Span Market and notices a recent spike in credits for getting married. Lifelockets mean each person must earn their right to stay alive.

“Can’t marry your hand, Leo.” Chuckles all around as his classmates’ mime shaking a bottle. Bullying means minus five creds.

“Could always pick a high-kicker career. Hear there’s a shortage of diggers, isn’t that right, Denise?” The seniors think of little else but credits as their promised time ends in two months at graduation. Now the laughter is lethal as many of the kids make skulls and crossbones at Denise and mime shoveling dirt. More negative creds but for a few more months, they are all safe in the nest of youth, unable to zero out; lifelockets never open before graduation.

Denise’s father is a digger. She’s seen cyanide run its course. Cherry red corpses, drained blood thick like red wires pouring from their sides. All around them, the lingering smell of almonds.

“Come on, Denise. These drainers are looking to burn points. Let’s hit The Big Yard. Get you home before dark.”

As Denise and Leo head for the metal turnstile, more laughter trickles after them towards their entrance to the capital’s largest cemetery.

Population explosion meant that the quota for deaths continued to rise. Make yourself useful in life and death, the state’s motto, and as the pair pass the mass grave dug for locket deserters, their bodies compost for next year’s garden plot, they let their hands slip into each other.

“Long enough for me to come up with the perfect plan.” Leo is the master strategist. He’s been working on a plan for months. Something to convince his family Denise is a worthy partner, despite her dodgy upbringing.

They pass an elderly man with a mahogany cane and Leo drops his grip. The elderly man is visiting the Greenwald graves today and the two stop and fold their hands in reverence. Denise knows all the family names of the graveyard having grown up among its stones. Leo’s family has their own section in The Big Yard called Cargill Corner. Cargill’s are known for their longevity and careers in law. They wait for him to pass in reverence. Age inspires awe. Leo can’t even imagine what this man must have done to deserve to live past fifty. Anyone over forty is a saint.

Denise’s house is a converted columbarium at the back corner of The Big Yard with a limestone dome and ornate windows. The angel has been removed from the center of the circular space, carefully chipped away at the base and then placed outside, a good luck charm.

Only diggers can squat in The Big Yard, and Denise and her father have the fanciest home available. The high ceilings make the space feel luxurious, although it once housed hundreds of human remains.

Denise opens a drawer that once held an urn and pulls out two glasses. She never had a mother and is expected to carry out many of the domestic chores. Denise wonders what will become of Pop when she moves away with Leo as she fills the glasses from the family’s fountain that supplies fresh water for both refreshment and cleaning.

Leo and Denise are old friends, but new lovers. They find a spot on the cool marble tiles and let their bodies adjust to this new role. The darkness of the space dulls away the day as Denise fumbles with the button on Leo’s trousers. These afternoon acts are irresistible to both. When the burdensome button finally pops, Denise hears an unfamiliar jingle.

“Your locket,” Leo gasps at Denise’s lifelocket hangs open on its hinge. The cyanide pill must be held in place behind the tiny, battered photograph. Take it and die with dignity. Refuse it and be executed at the hands of the state but with huge negative cred for all your relatives.

“There must be a mistake. I haven’t even graduated yet.” Denise’s chest is red with panic as she pulls out the photo, a girl with plaited black hair and dark skin. A name on the back reads, Bonnie Braylor. Could this be her mother? But her look is so different, the skin and hair so dark compared to her own freckles and blonde locks. Then she remembers the name. She’s passed her grave hundreds of times. It is near the yew tree by the East Gate.

“This can’t be my mom. There’s been some mistake. Come, Leo.” She tugs his hand, but he wiggles free.

Unable to wait, she heads out into The Big Yard. Leo must decide whether to follow or flee. This requires careful contemplation. If he is implicated, it could mean huge negative creds. After a few minutes of indecision, he reasons that it’s not normal for a locket to open before graduation, so he sets out after her, hoping to help. He struggles to remember which way she said to Bonnie's grave.

“Pop!" Denise finds her father digging a grave near Bonnie’s small white stone. She is out of breath when she reaches him.

“What is it, child?” Her father is stooped. Years as a digger have curved his spine, planted rows of wrinkles on his forehead, and embedded dirt under his nails. He prefers digging in the afternoons or evenings. Sunrise is best suited for the drainings, anyhow.

“My locket, look.” She holds up the locket. The digger drops his shovel and covers his mouth.

“It’s as I feared.” He moves closer to see the pill and the photo plastered tightly within.

“Pop, look at the photo. The name is the same as the grave under the yew tree. But how can that be? Bonnie Braylor died at age eight, not old enough to have children. What am I to do? There's been a terrible mistake.”

The digger takes out a towel to wipe his brow. “I heard your screams after midnight eighteen years ago. You were wrapped in a white cloth. Someone had abandoned you by the East Gate.”

He points in the direction of the gate as if to validate his story.

“I couldn’t leave you for dead, could I? So, Bonnie here had just arrived. I decided to use her locket, thinking, there’s got to be some good time left, what with her dying so young, and all. I kept hoping for the best, that maybe they didn’t open after death, but…” The digger’s cracked lips quiver and he can’t finish his speech.

Bonnie goes into the folds of her father’s open arms and lets her tears water his soil-caked shirt.

“I’m sorry, Denise. I did all I could.” The digger gives his daughter a squeeze and bends and picks up his shovel, as if to return to his work. But instead of stooping, he raises the tool and swings it hard at his daughter’s head. He rolls her fallen body into the fresh grave– dug deep enough to hide her corpse.

Catching his breath, he speaks down into the grave. “It was you or me, kid. I did all I could. But if the state finds out what I did, well, I’ll lose all my cred. I quite fancy a few months of retirement before death.”

Leo emerges from behind the yew tree. He's too late to save Denise, but he uses both hands to push the digger off-balance, making him tumble after his daughter into the grave.

“Wha?” The digger lands on Denise’s corpse. Instinctively, he starts clawing at the wall of dirt in front of him. But a good digger knows the depth of death, and the sides are too steep for him to escape.

“What are you doing here?” Pops shields his face to look up at Leo. From this angle, the boy looks like vermin, his thin wisps of facial hair odd on his youthful face.

“Come here, boy. You don’t have to do this. I got lots of ways to help you out.” The digger pleads, thinking if only he can get hold of a foot.

“You didn’t have to kill her.” Leo points his finger at Denise’s dusty body as he speaks. “This is a nasty mess. I feel sick. I fell dirty just having to clean it up.”

Leo calls the authorities and sits in the shade of the shaggy tree to wait. He imagines all the creds he’ll get for the citizen’s arrest. First, they’ll transfer the digger’s credits to him. Then, he’ll surely net a big bonus for good citizenship.

Leo tries not to think about Denise or her father, who is now trying to use her body as a ladder to climb from the grave. For the first time in his life, he feels the stress slip from his face. There is no hurry now, life is no longer a matter of minutes.

K. Hartless is a writer of fantasy, horror, and science-fiction. Her blog, Yardsale of Thoughts, blends poetry, music, art and brevity to create new experiences for readers.