A Life Worth Fighting For

by Elle Richards 4 months ago in science fiction

Faced with a big risk, a moon colonist forced to live at the Rim must let go of his past to get a chance at a better life in the Nexus. 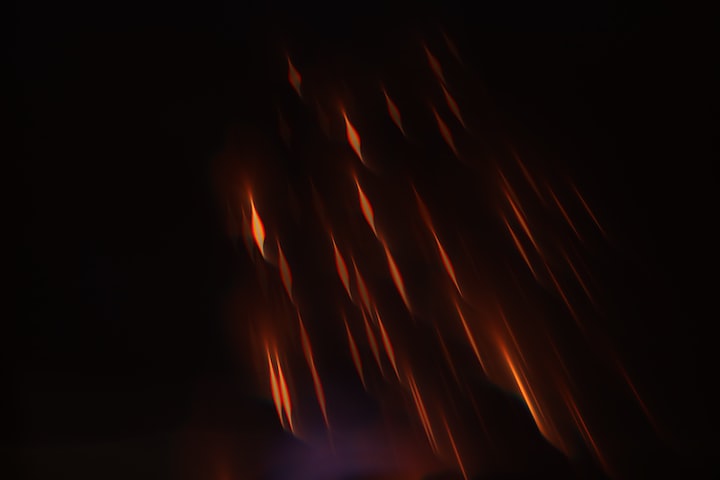 Photo by Meagan Carsience on Unsplash

“The stuff’s called Juice,” Lazlo says, rolling across the sticky table to me a small vial of liquid that’s an unsettling yellow-green. Like bile.

“Come on, Laz. I know there’s something you’re not telling me, so what is it?”

He sighs, runs a hand over his face. “Fine. Deal is, it costs an arm and a leg.” He pauses, knocks back a swallow of whiskey.

A tight knot forms in my gut. I know that’s not the worst of it. That’s still coming.

“And it ain’t exactly illegal, but it also ain’t so… legal. They find out you’re on the stuff, you can say goodbye to them winnings you want so bad.”

“Need, Laz. I need those winnings. Jonah can’t handle the Rim. His lungs…”

“Yeah, yeah,” he waves me off, waves down another order of whiskey, “Sick little brother’s got breathing troubles, I remember. Everyone livin’ at the Rim’s got a sob story, Josie. Ain’t just him that can’t handle the pollution They pump into our atmo from Theirs.” He pauses. His black eyes bore in to mine, letting his words sink in. “So whatcha think?”

“No, but you got that locket.”

I clutch at the locket hidden beneath my shirt.

It’s not exactly my style. Too femme. A golden heart shaped locket hanging on a slick matching chain. But that’s not the reason it’s hidden.

It’s damn near impossible to come by something worth so many Pieces at the Rim. Most of us are lucky to come up with an extra Slice, maybe two. But this necklace is worth twenty Pieces—that’s two hundred Slices—according to Lazlo. He’s tried to convince me to let him sell it more than once. But I ain’t selling. And that’s exactly what I remind him.

“It’s not for sale, Lazlo.” I say, careful to keep my voice calm. Lazlo may enjoy my temper when I’m in the ring, but he’s not so fond of it being turned on him. No one is. “We’ve been over this.”

“Relax, Josie. I’m not try’na get you to sell it. Not today. Just proposing a deal.”

“What’s that saying about when something sounds too good to be true, it’s ‘cause it is?”

“Yeah, well, just hear me out, all right? I’ll front you the Juice to give you that extra edge in tonight’s fight. You give me that locket”—he raises a finger when I open my mouth to argue. I snap it shut despite the fury licking at the back of my throat, seeking an outlet. “I’ll hold on to it. That’s all. Collateral.”

Taking a deep breath, I let myself think it over.

I suppose it could work. But whereas I may trust Lazlo to get me into the best paying fights, not sure I trust him with my locket. Some things are worth more than all the Pieces on this dusty moon. This necklace is one of them.

“Shoo,” Lazlo whistles, “You are a fool, you know that? You still ain’t healed from the last fight. Don’t think I didn’t notice that limp you had comin’ in here.” He takes a swig from his second whiskey. “You got a death wish or somethin’? Got someone to take care of little Jonah after Bleaker finishes you off nice and bloody over in that ring tonight? ‘Cause that’s what’s gonna happen you fight without any”—he pauses, eyeing warily a couple of femmes walking by.

They’re headed to the lavatory past us, but Lazlo’s right to be cautious. Cautious keeps you alive at the Rim.

“Without any help,” he finishes, his eyes landing on my hand still clutching the vial. “That Juice’ll get you feelin’ all healed up, speed up your reaction time and make you punch harder than an Android.”

He’s not wrong, I’m not healed just yet, and I can’t deny that kind of assistance would come handy in tonight’s fight.

“Bleaker is a good fighter,” I say softly, betraying myself by considering his offer.

It was hers, the locket.

She gave it to me the day the Corps spaced her for Resistance.

After twenty-two years on the job as an engineer so good she changed all Their lives for the better, Ma got injured on the job. She could hardly walk after and had to stop working. Guess They decided all that good she did was nice and all, but since she couldn’t Produce anymore it ceased to matter. They sent a squad of Enforcers with Relocation orders to move us from the Nexus—where only the wealthiest can afford to live—to the Rim.

Where nothing good ever happens.

Where every day is a struggle to survive.

Ma Resisted. Screamed about our rights. Pushed back an Enforcer with an open palm to his chest when he yanked Jonah by the arm so hard he broke it.

Hours later, we said our goodbyes to her at the Catapult.

During my goodbye, she pulled me close. Kissed my forehead. Dropped the necklace into my open palm. I stared at it pooled in my trembling hand looking like a coiled, golden snake ready to strike and tried to shove it back at her. She shook her head. Told me to promise to hold on to it as a reminder of where Jonah and I came from. That there was a better life out there for us. A life we deserved to live as much as anyone else. A life worth fighting for.

Tarnished with time, stuffed with nothing but faded memories of a good life, the necklace fuels my desire to free Jonah and me from a life of merely surviving. Seeing it, feeling it around my neck every day, reminds me of the fight she had in her heart. The love she had there too. It keeps the fire in my belly burning hot and bright. Helps me in my fights. Keeps me winning.

The twenty Pieces it’s worth would get me and Jonah out of the Rim, back into the Nexus, sure. But then what? We’d have no Slices left for living. So I’ve been holding out for a bigger payday, and now I think about it, this might be it.

He looks up from his third whiskey, his smile stretching wide with victory. “You’re joking?”

“No. But I want to the get the details straight before I hand it over.”

He nods, straightens up, pushes his drink aside. “Here’s the deal. This fight’ll get you seventy-five Pieces, assuming you win. And you will with that Juice. Easy. After it’s over, I’ll get the twenty the Juice is worth and give you your necklace back. Simple.”

I stand up, stick out my hand. He follows suit. “You gotta deal, Laz.” We shake on it.

Checking around to make sure no one’s looking, I stuff the vial in my pocket. Then, I unclasp the necklace, try to hand it over. My fingers don’t want to let it go as I watch Lazlo lick his lips like he’s going to eat it up.

A half-hour later, I’m in the bar’s lavatory. The foul taste of Juice clings to the inside of my mouth and throat like sour milk. Gagging, I nearly retch, but manage to keep the stuff down thinking of Jonah. How much he needs this win.

He’s only getting sicker by the day.

The Juice hits hard and fast. Sweat begins streaming from places I didn’t know I could sweat.

I look myself over in the filthy mirror. Worry clenches at my chest. My eyes are wide and extremely alert. Too alert. Bug-eyed. I force my face—dripping with sweat—to relax and rip off my already soaked shirt.

My eyes linger at my bare neck.

Swallowing the guilt tastes worse than the Juice.

I make my way to the ring.

Everyone I pass on the way suddenly moves slower, or I move faster. I don’t know which.

Waiting at my corner, the effects intensify. The shouts of the crowd melt until they’re muffled like they scream through water. But I hear Bleaker’s hefty breathing perfectly clear when I focus on him. My blood’s boiling. Needles stabbing my skin all over. Mouth’s dryer than moon dust.

In slow motion, Bleaker comes at me, cranks back a meaty fist. I could dodge it easy. But I drop my hands from my face, let the strike land. And though I don’t feel it, I make it look like I do.

Can’t give the ref something to worry about.

Dramatically, I throw my head back with each hit I don’t feel, letting my feet follow suit until I’m pressed against the ropes. Fast for him, an eternity for me, Bleaker gives me another jab, jab, cross.

That’s enough of that.

I bring my hands back up and spot Lazlo grinning like a fool over Bleaker’s shoulder. He winks at me in slow motion.

My chest tightens with excitement.

Too quick for Bleaker to react, I nail him once, twice, three times in the gut until he doubles over. Spits. I bring my fist up, cutting at his jaw. His head flies back, but he’s not putting on any show. I jump up, throwing all my weight into it, and bring my fist down against his left cheekbone. Sweat, spit, blood fly. Hang in the air. Glimmering under the lights like glitter. Bleaker’s face falls slack. He drops to his knees. His face kisses the mat.

The crowd roars through the water until I hone in on it. Then the sounds come back in a rush, piercing my ears like knives.

The ref meets me at my side, tugs my hand in the air. But I hardly notice. I’m too busy watching old Lazlo. He’s pushing through the crowd, making a run for it.

Jerking my hand away from the ref, I start to go after Lazlo.

The ref looks me over, eyes narrowed. “You all right?”

He snorts a laugh, “Ain’t ever seen someone try to leave without their winnings before.”

Nodding, eyes trailing from the ref to the door that closes behind Lazlo, “Yeah, uh, right. Right.” My heart squeezes, and I push away the worry that says it’s the Juice. “Lead the way.”

Stepping over Bleaker, we exit the ring.

He nods without lifting his eyes from the glinting silver cubes he counts out from a safe behind his desk. All seventy-five of them. As I watch him scoop them up into a black velvet pouch, cinch the strings puckering the top closed, all those punches I didn’t feel come at me.

My head pounds. Aches. My ears ring. My dry mouth fills with the taste of metal, making me queasy.

But I’m still thinking about Lazlo and Ma’s necklace.

The weight of the pouch in my hand wakes me up.

The owner waves a hand. The goon at my side tugs my arm, leads me to the back exit.

The stink of the Rim hits my nostrils, stinging, and I try to decide where Lazlo might have gone.

Then it hits me.

It doesn’t really matter. Not anymore.

Gripping the pouch tight, I sprint home to Jonah. Silently thanking my mother for her fight, her heart.

We’ll finally get the life she wanted for us.

Peace of mind for me.

We’ll finally get to live again.

Receive stories by Elle Richards in your feed
Elle Richards
Read next: It is not Ta-Tardis yet for Doctor Who's Clara Oswald! She is holding fire!