by Matthew Kresal 19 days ago in conventions

A Tale of Alternate History 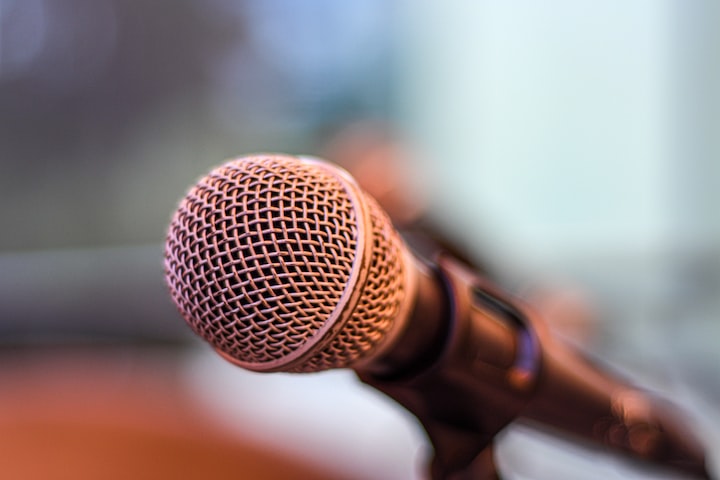 Photo by Robinson Recalde on Unsplash

Mark Lee looked at his iPhone. It was one o'clock, time to get started. He cleared his throat, adjusting his glasses as he did so.

"Good afternoon," Lee said, looking out on a couple of dozen people packed into the small room as he told them his name. "Thank you for choosing us over the Paul McGann interview down the hall."

A laugh briefly filled the room, making Lee smile. Given he'd had that joke in mind since he'd submitted the panel idea, it was nice it landed well. How would the rest of their time go?

"While we'd all love to hear what it was like being the "Cool Britannia" Doctor of the nineties, we're here to talk about another Doctor entirely. But first, the rest of my panelists. On my left..."

Lee turned to the redhead with glasses old enough to be his older sister on his left. "I'm Kate Cooper, I’m a librarian and host of the Who Not Whom podcast."

"Thank you," Lee gave her a nod. He turned now to the brown-haired guy in the red sweater with a floppy brown hat sitting next to him. "And on my right..."

"Hi, I'm Todd Valentine. I wrote the book Doctor Animated coming out later this year about the anime we're here to talk about."

"I need to pre-order that!" Lee said without meaning to. Embarrassment followed a moment later, but it dissipated when Valentine laughed. His laugh was an infectious one, making the audience join in too. "But let's get down to business. How many people have seen The Mysterious Doctor?"

Nearly every hand in the room went up. An impressive turnout, Lee thought, given what he'd seen online in the forums. Or, indeed, the man settling in the back with a t-shirt that read It's No Mystery, It's Not Canon!

"Let's start at the beginning, shall we? I think most of us know that five of the Target novelizations came out in Japan in 1980. The Daleks, Spearhead from Space, The Silurians, Colony in Space, and Day of the Daleks."

"Ah, she's got one!" Cooper beamed, pointing outward. Lee followed her finger, seeing a teenage girl in a Dalek dress holding up a book. One whose cover showed a young woman with missing mannequin arms held up above her head. The cover's dark red coloring stood out even from the seat a couple of rows back.

"Have you read it?" Valentine asked, causing the girl to shake her head. Lee thought the teen might be embarrassed until she mentioned she was using it to try learning Japanese. Valentine liked that, adding, "It's cool to have, isn't it? That's what matters."

Dalek Dress girl lowered the book, the people behind her peeking over her shoulder at the old volume as if she had the Holy Grail. In a roundabout sort of way, she did. But they needed to talk about that.

"The books tuned into surprise hits in Japan," Valentine explained in the tone of a "cool professor." Which, if the convention program was being honest, he was at some university in Canada. So Lee decided he could let him talk for a minute.

"Even more surprising given that there wasn't any Doctor Who shown over there," Cooper jumped in. "It had in Hong Kong and Taiwan, but not in Japan."

"Hence how Prison in Space with Patrick Troughton turned up," somebody in the audience chimed in. Lee didn't mind the comment, it was why they were here, but he didn't want to get too far off course. Time to steer the panel, then.

"Books that were quite different to the TV show. I think the Dalek adaptation, Great Bloody Battle in Time-Space, depicts the Doctor looking more like Darth Vader than William Hartnell."

"Don't forget the Daleks!" Cooper laughed, along with most of the audience. "Instead of a pepperpot, you got that egg-timer with the eyestalk and raygun."

"Running around on a sort of ball," Lee agreed. He looked to Valentine. "How in the world did that happen? I'm guessing you might have found out in writing your book."

"It turns out the fan story is true about the illustrator. Michiaki Sato had never seen a Dalek before, and because the publisher didn't want to pay the BBC to license the Dalek design, he didn't get to see one. So he let his imagination run wild, as Raymond Cusick did back in '63, and designed his own."

"The Mitsubishi Daleks," the guy in the Not Canon t-shirt said dismissively from the back in a loud voice. The panel glanced at him, Valentine nodding at the comment. Lee went to speak, only not to make the first punch.

"That's what a lot of the fans call them," Cooper leaped in. "Like the current ones are called Telletubie Daleks."

Even the Not Canon guy laughed at that line. Cooper, though, was talking again before the laughter had subsided. "Whatever we call them, they became the Daleks in Japan, and even John Peel used them in one of his Virgin New Adventures, I think?"

"War of the Daleks. One of the better things about that novel that didn't involve rewriting blowing up Skaro at the end of Remembrance of the Daleks." Lee paused, looking at the time on his phone. The clock was ticking, and he needed to move things along. "Todd, these started as books. How did they become an anime?"

Todd took off his hat, running a free hand through his brown hair. "Japan got its own form of belated Dalekmania in '80-'81, rivaling even Star Wars there for popularity. So, there was a bidding war and some minor haggling over rights given the BBC owned Doctor Who. The writers, of course, had copyright on the scripts and characters within. So, like with the sixties Dalek movies, the anime would be in a universe all its own. Not to mention the designs changed, like with the Daleks and the TARDIS."

A young man cospalying the anime Doctor’s Vader-esque outfit raised a hand. Lee pointed at him. "You've got a question?"

"Yeah," the guy was nervous with his chin just about on his chest. "How did the TARDIS end up being a red phone box instead of a police box?"

"Again, that was the illustrator from the original books." Valentine paused, reaching into a satchel bag and pulling from it another of the translated books. "Sato didn't have a reference photo for the police box as the British knew them. So he adapted the stereotype red British callbox, added police telephone to the top, and Bob's your uncle. When they did the anime, they dropped the police bit altogether."

"And the first few strands were just adaptations of the novels." Cooper chimed in from her end of the table. "I never knew that first Dalek story needed more than seven episodes!"

"Just the anime way of doing things." Valentine's tone was a tad defensive. "Though they did use a similar device, similar to the early Hartnell serials had, of everything flowing into one another. Though that led to some continuity issues."

"Like Ian and Barbara just walking away to their normal jobs at the start of Auton Army Invasion?" Lee offered, remembering how jarring it had been when he'd watched it. "Or Liz's characterization changing between Underground Monsters and The Fearsome Ultimate Weapon?"

"Or how the Brigadier knows the Doctor in the other stories but not in Fear of the Underground Web?" Dalek Dress girl said with a raised hand.

"All fair points," Valentine conceded before anyone else could make a point. "All things that happened when you adapt novels and scripts out of order from the original series. Though with Liz, at least, she got an eventual on-screen exit. Which, let's be honest, is more than Caroline John got in the original series."

"I must say that I prefer the Primords of The Prehistoric Ooze to those of Inferno," Cooper said, rubbing her chin like she was Jon Pertwee's Doctor. "And Ooze confirming the Axis winning World War II fan theory was a neat thing to see."

"Though controversial," Valentine pointed out before taking a sip of water from a plastic cup, "especially when the anime made its way to the West."

"The bootlegs!" Someone from the audience shouted in a borderline squee. Cooper laughed, Lee seeing her nodding out of the corner of his eye.

"I remember being at a con here in Chicago in '86, Troughton's last before he died flying back to the UK. Someone had a subtitled copy they'd gotten from Rassilon knows where. We each went to a room in the hotel where a guy had four VCRs hooked up. You paid fifty bucks for an entire strand. It wasn't great quality, but I watched the hell out of that tape!"

"To think that $50 will buy you the entire series these days," Lee said, shaking his head. "I kind of wish I had been around then. It's great to buy it now or see it on streaming, but I kind of miss the days when you had to go and hunt everything down the hard way."

The older audience members and the other two panelists laughed at the admission. Not out of malice, Lee thought, but from something else. Nostalgia mixed with his naivete, maybe?

A hand went up in the audience. Lee saw it belonged to a young woman with dark hair, mid-20s like him. He saw the Not Canon guy had his hand up, too. Yeah, there wasn’t much consideration for whose question he took.

“Maybe jumping ahead a bit," she started, a slight southern twang to her voice. "But do we think that Moffat will feature reference the anime in the fiftieth?"

Ah, the fiftieth, Lee thought. Hard to believe the big anniversary was just a few weeks away. And it would be getting a one-time showing in cinemas, too.

"What do we think, panel?" Lee looked both left and right with a single turn of his head. "Do we think Steven Moffat will somehow work the Mysterious Doctor into the special?"

"I have to admit, I thought John Hurt was going to play him," Cooper said with a shrug. Valentine gasped, raising his hands as a smile crossed his face.

"That would have been awesome!" Valentine laughed. "Can you imagine him dressed up all in black, stepping out of the red phone box? It would be amazing!"

Not Canon shirt found his voice. "Except the BBC said it wasn't canon. That was part of the agreement, as I'm sure Todd knows from writing his book."

"I did mention that earlier, but remember Doctor Who's canon is fluid," Valentine fired back with enviable speed. "After all, the Daleks weren't created by Davros until they were, and Spare Parts re-wrote some early Cybermen history when they filmed it with Grant's Doctor. Not to mention there’s two versions of Paul Cornell's Human Nature.”

A thought crossed Lee's mind. "In other words..."

He looked at the audience quite serious. They looked at him, and he at them. Then he smiled, looking right at the cute girl who'd asked the question.

A combination of groans and laughs passed over the audience. A couple of people even clapped their hands. Lee smiled before he looked down at his phone. The panel still had plenty of time left, and it was going so well.

Matthew Kresal was born and raised in North Alabama though he never developed a Southern accent. His essays have been featured in numerous books and his first piece of fiction was published in the anthology Blood, Sweat, And Fears in 2016.

See all posts by Matthew Kresal →