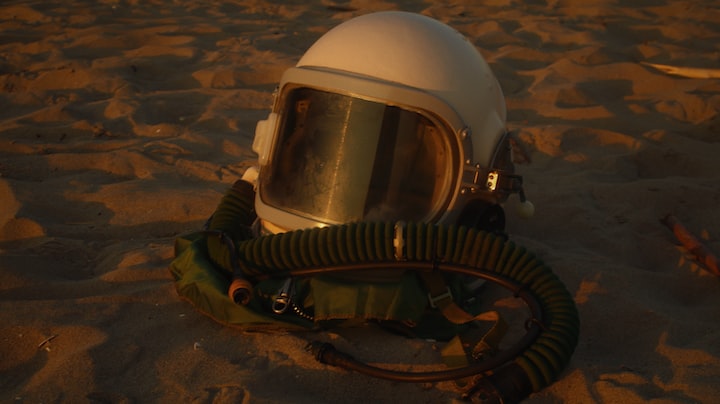 Nobody can hear a scream from the deep vacuum of space, or so they say.

His skin had a deep red undertone seen in certain lights and as he moved in subterranean worlds and across the uncertain grounds of unknown and hostile planets, he was like a tank with human origins.

Sky was the captain of the Thessalonica 4 and she was overtly and embarrassingly enamored of him.

He (He went by Red). spat and cursed into the ground today as they had the misfortune of being assigned to Babylonia 7, a close planet in relation to the now blown to bits Aztec Orchid.

The Aztec Orchid was not only hostile to human life but harbored a consciousness that ruthlessly sought and destroyed (ate) other planets that were habitable to humans.

The planet was stunning, jaw droppingly beautiful, and Red often had a habit of falling for some of the creatures she(the Aztec Orchid) sent to lure him. Close calls and deft maneuvers from Sky and the Leviticus or Deuteronomy ships' crew were all that found him living to breathe on this side of awake.

Babylonia 7 wasn’t much better but at least she couldn’t substain evolved creatures, yet. Nonetheless this mission was unappealing. The goal was to catalogue and obtain all substainables (life forms)separating friends from rogues, and enemies from benign. The smaller goal on todays agenda was to cut back more hostilities and continue trying to make Babylonia 7 a substainable planet.

Red was a little bit of a joke because of his hostile temper and his flirtations/relations with women. He had fallen mad for a dame named Janice but not ever going to happen she had informed him.

Babylonia 7 had put on her best colors for him this night. Both moons in the sky, one a blood red and the other it’s pinkened reflection. He knew this bitch of a planet and couldn’t be fooled by the ethereal beauty of the calm pools and lakes or the shimmering translucence in the bioluminescent and diverse plant life. “We should’ve called this one Venus, oh fuckin, be damned,”he thought.As he kept an eye for the translucent shells that signified the beginning of separate and creature life, he cursed under his breath at the memories of near failure and surveyed the skies.

As if on cue, a dark shape briefly snatched sight from his left field of vision and expanded to change the entire atmoshphere into a darkened shade of violets and threatening crimsons.

A brief circular pool of greens and blues and static took shape and from the translucent pool of circled ripples a human shape formed.

Loki from the base planet Nefarious began to speak, “Today the origins of Dresden, Babylonia 7, and Thessolonixx are known, in the pattern of replicative DNA structures from collected life forms is it certain that the parent planet is Aztec Orchid. This is the bad news, now for the good news. The Aztec upon its conquest and subsequent dominance of Thessalonica 11 absorbed much of the DNA sequences for human inhabitants into its own genome. This is good news because it confirms suspicions that Babylonica 7, Dresden and Thessalonica are near habitable planets!!!!Cheers to the survivors of the Aztec Orchid and the subsequent future.

And with that the transmission was over.

﻿Red’s scream of victory and triumph ripped holes in the space time continuum. They say it was heard for miles and across light years. It’s reverberations bounced for millennia of continued human existence.

Installment Two; from the viewpoint of Janice

A plethora of juxtapositions lorded over my soul like empty eye sockets with sight as I surveyed my surroundings.

Broken bones and dead thought chambers stood like edifices to a generation that believed in false glamour.

Everyone knows that glamour is real stuff, the stuff of fairy tales that walks among us with the aid of glitter and make-up and long standing fame and elegance born from the pain of true beauty.

I walked through the mazes of ancient technologies and architectures that still breathed the life of history and old civilizations. I thought of Red, who considered himself in love with me. Yet hadn't the capacity to be true to me. I embraced my loneliness.

This planet was called the Thessolonica 2, it once harbored a rich diversity of human and not-so- human life who coexisted in relative harmony until the Aztec Orchid found them.

The Aztec was once a beautiful and prosperous planet, it was not benign to human life. Long story short, the Aztec converted or ate the beings that lived on the Thessalonica 2.

The planet was left deserted.

I still hoped that the hostility that had consumed the Aztec even to the corruption of life and genetic structures had been satisfied with the consumption of conscious life and had not corrupted the plant and planet life left on the Thessalonica 2.

I remembered civilization as it was before AI and the clones had corrupted the genetic database for life with an all-pervasive will for dominance that destroyed other life with abandon and hostility.

I remembered a life that wasn't wandering from planet to planet and the headlong race for survival before I had to accept the fact that we may not find enough sustainability to keep humanity alive. I remember a time before the Aztec Orchid and its sister planets.

I sat on the stone edifice where humanity had once made a home and studied my reflection in the pool of water that remained in the fountain of the grand palace that was once the center of a whole world of people.

Before the Aztec Orchid this civilization was peaceful. It was a holistic society built with ideas of harmony and the reign of an extraordinary sense of justice and balance within nature.

I felt melancholy pondering the fates of the reigning queens and kings who were literally consumed by envy.

Alone in this speculation, my thoughts wandered. The atmosphere changed. My mind shed the illusory cocoon of being alone as my thoughts were shattered. My reverie was broken by a humming that reverberated through my eardrums like the tiny percussive of circling hoards of insects that had found a way inside of my brain and had begun eating me from the inside out. Their tiny wings beat malicious paths of staccato treason through my solitary dignity and loneliness.

Loki from the base planet Nefarious began to speak, “Today the origins of Dresden, Babylonia 7, and Thessolonixx are known. In the pattern of replicative DNA structures from collected life forms is it certain that the parent planet is Aztec Orchid. This is the bad news, now for the good news. The Aztec upon its conquest and subsequent dominance of Thessalonica 11 absorbed much of the DNA sequences for human inhabitants and inhabitation into its' own genome. This is good news because it confirms suspicions that Babylonica 7, Dresden, and Thessalonica are near habitable planets!!!! Cheers to the survivors of the Aztec Orchid and the subsequent future.

And with that, the transmission was over.

In the brief moments after the transmission, I suddenly was overcome with an inexplicable feeling of connection with Red. It was as if the ancient genetic structure of his Scottish heritage reached into my soul lifted me up and we sang in the scream of victory together.

It was the victory that can only be known after years of war when the battleground becomes an apostrophe in your life even as you are still in the trenches, gun in hand and enemies at your feet, tearing at your back, and all around you.

And then if only briefly, I once again pondered loving him.