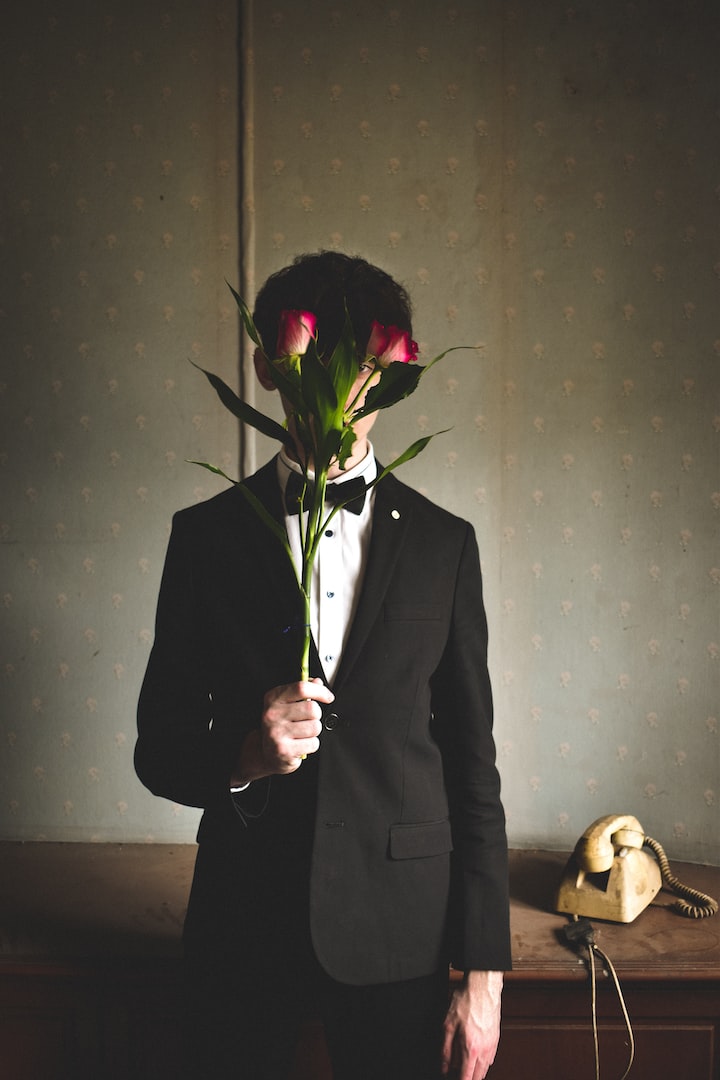 Photo by Quinn Buffing on Unsplash

First editions always made him feel sexy. It would be hysterical if a woman walked into the shop right now and caught him partially aroused by a stack of graphic novels. It wouldn’t be the first time in history a nerd popped a boner over a comic book villainess, but it would be the first time a woman had ever walked through his shop door.

Barnaby took a swig of his energy drink and picked up the next box from the inventory stack. He grabbed the box cutter: These things must be done with the outmost care. The manufacturers were supposed to ship the comic books with a protective layer of carboard or thick foam surrounding them, but obviously some employees didn’t take pride in their work. Barnaby furrowed his brow in concentration as he slid the boxcutter around the top of the box with surgical precision, careful not to damage the contents.

The phone rang, shocking him quite earnestly. It was an old landline, a relic from the eighties with a ring that sounded like a damned fire alarm. He’d forget that he even had a phone for days on end. Comic book enthusiasts were typically far too antisocial to call and speak to a human.

Barnaby picked up the receiver and, much to his shock, a female voice inquired, “Yes, how late are you open tonight?”

He was too overcome to reply. It was a Monday night and only a few stragglers had been through all day. The last of them had left hours ago. Barnaby had forgotten to flip the sign to Closed.

“Perfect,” responded the voice. The woman had one of those wispy baby doll voices, kind of like Meg Tilly that Barnaby had never really understood. They must be affected. No one actually talked that way.

“It will be ok then, if I come by? I can be there in 10 minutes. Would that be too much of an inconvenience?”

Fully perplexed, he stammered, “Why, no Ma’am. It’s just that…”

“Well, is there something in particular that I can help you with or…have ready for you?”

“I’m sure it’ll make sense once I’m there. It’s about the unexpected package. Better for me to tell you in person.” With that, she rang off.

Barnaby scratched his head. Queer, that! Unexpected package? She must be mistaken; he’d wanted to tell her before she’d hung up. Shame, her coming there for nothing. He turned and retrieved the last parcel from his inventory stack. More promo posters for the latest Marvel movie. He wasn’t excited about them, but was under contract. Not that he didn’t like Marvel comics. He just didn’t like promoting things he hadn’t seen first. A man needed to be able to vouch for a thing. Man’s word was everything.

Just then, the ting-a-ling of the bell he kept over the door caused him to jump back, startled. My, but he was certainly feeling rather jumpy. First the phone call and now this. What was the world coming to?

A rather finely dressed man walked in wearing a Burberry suit and trilby hat pulled down low, over his brow. He had a newspaper tucked under one arm and in the other carried a plain, brown-papered parcel. The man might not have stood out much. Had this been a 1950’s drugstore. The man was so anachronistic that Barnaby would have thought him mental. Except Barnaby owned a comic book store. There were a million different kinds of Comicon and Cosplay characters. This guy could be a Dick Tracy type.

The man turned and walked toward Barnaby. There was something – decidedly odd - about the way he moved, almost robot-like. It seemed artificial in a way that made Barnaby’s blood run ice cold. When the man approached the counter, he didn’t say a word, but pulled up his hat so that Barnaby could just make out one dead, black, sharklike eye. The man winked at him and placed the brown-papered parcel on the countertop. He hesitated for a single beat, tipped his hat back down as if to say good day, then turned on one heel and headed back toward the front door.

“But wait! Um, Sir - ” The man stopped, hand on the door knob, and turned halfway around, his hat still obscuring his eyes. He said nothing.

Barnaby could have sworn he saw the man grin before he turned and exited, calling over his shoulder, “It’s your problem now, buddy. You take care.”

A little more than flummoxed at the sudden turn of events, Barnaby stood there dumbfounded. He must not be feeling well. He’d slept poorly last night. Had he eaten enough today? He probably had a fever. One of the kids in the shop earlier had a perpetually runny nose. Damn brat had probably walked around touching everything with his germ infested, snotty little hands.

Kids were disgusting. If more adults were into comics, he wouldn’t even allow kids in his shop. But the little creeps paid his rent with their allowances.

He walked to the far end of the counter where he kept a mini fridge and got himself a cold ginger ale. That would help. He just needed to collect his thoughts.

He stood there drinking his ginger ale, not realizing his back was to the door until, for the second time that day, he just about jumped out of his skin with the tinkling of the bell. What idiot had put that there?

He turned and almost did a spit take. A woman, not just a woman, but one of the most glamorous women he’d ever seen stood in the doorway. She was wearing a well-tailored Chanel pant suit and a long silken, brocaded scarf, one that looked expensive, draped around her neck and shoulders. Almost like a cape, he thought. She was wearing a wide brimmed sun hat which dipped down, obscuring most of the right side of her face. Still, it did nothing to hinder her radiance. Her skin was flawless, her silken hair cascaded down, framing the left side of her face like a golden waterfall.

Much like the gentleman who’d just departed, she looked anachronistically placed, like she had just walked off the set of a Humphry Bogart movie, or maybe a detective flick.

She sauntered over like some kinda Jessica Rabbit – well – comic book femme fatale. This couldn’t be real. He was feverish and hallucinating, certainly. The woman’s hips swished and snapped with every step, almost as if there were a jazz band punctuating every step with a syncopated, boozy beat. Her hips were just keeping time. Watching a dame like his, a guy could start to get ideas.

What was happening to him?

“I called,” she began in that breathless baby doll voice, which suddenly didn’t seem so objectionable, “I’m here for the unexpected package.”

“What? Oh yes - of course! That is, I guess you mean this one here,” he said as he half turned, still looking at her, trying to make out the color of her eyes. “It was the oddest thing, I must confess ---”

Barnaby was gesturing to the place on the counter were the brown-papered parcel should have been. But when he fully turned, he did a double take.

Impossible! But, where? How?

What the fuck was happening?

“Wait. What? It was right here - I swear! This man came in, strange fellow, didn’t say a word, left the package on the counter and then just turned around and walked out."

The woman gasped, “This fellow, was he a dreamy Carry Grant type – tall, dark and handsome?”

“Yesh! Well, that uh sounds about right. I uh, I suppose.”

“And he didn’t say anything? Not a single word? Think hard! This is important!”

“Not a single word. Honest engine” Since when did he talk that way? “Well, except, at the very end. It’s nothing but…”

“But what? You must tell me exactly what he said, please. It’s dreadfully urgent.”

The woman sat down hard; her face pulled down at the edges in genuine despair. She looked worried. The kinda worried where something bad, really bad, happens. Not the usual ‘I have some idea how to handle this because I’ve had similar experiences’ bad, but the kinda bad attached to the kinda thing most people never have the misfortune of dealing with in life.

“Is it. I mean, Is it really all that bad?” But he knew somehow that it was.

“Oh, yes, I’m afraid it is. And worse still, the package just…disappeared?”

Of course, Natalie seemed correct. “Well, Natalie, He put it right there, on the counter. I am certain of it. I asked him if he wanted it, he said it was my problem now, then he turned and left. I turned around to get myself a ginger ale. That’s when you came it. As you can see, it’s not there now. I can’t imagine for the life of me…” He started walking around the counter, checking the floor; he even got down on his hands and knees. It was impossible, but it was gone. Just, gone.

The woman, Natalie, composed herself and stood. She looked around the shop, then back at Barnaby as if she’d just seen him for the first time.

“Right. Ok, well, you’re a part of this too, I suppose. We’ll have to work together now, it’s really our only chance. He said it was your problem, but then it disappeared. That must mean there’s been another glitch. If so, then the timefabric opened again, so any number of people could be – will be - looking for the package. It’s incredibly important that we find it before anyone else does.”

Natalie could see that he was distressed, “OK, well, you’re going to have to put your existential crisis aside for now. A lot of people looking for that package are very bad people. Not just bad. Evil.”

“No. No, of course they are. They wanna blow up the world or something. Right? Or enslave the human race? I mean, look around! I own a fricken comic book store. I’ve read every version of the villain must be stopped story there is. That’s precisely how I know that this cannot be real. This isn’t a comic book. This is real life. There are no caped heroes.”

“No, there aren’t. There’s only us. Against a host of potential comic book villains - as you so eloquently put it. But then, that must be why they chose you I suppose.”

“Them. Because, if you really have read every villain must be stopped story known to humankind, then you must know how we stop them.

Barnaby stared at the mysterious woman. Well, this made as much sense as anything else. He was going to go home and eat a frozen dinner with his cat, Piper, just like every other night. He remained unconvinced that this was anything more than a dubious prank.

Well, at least this was something different, he thought as he walked over, locked the shop door, and flipped the sign to Closed.