by Sarah-Jayne Hucks 4 months ago in Fantasy 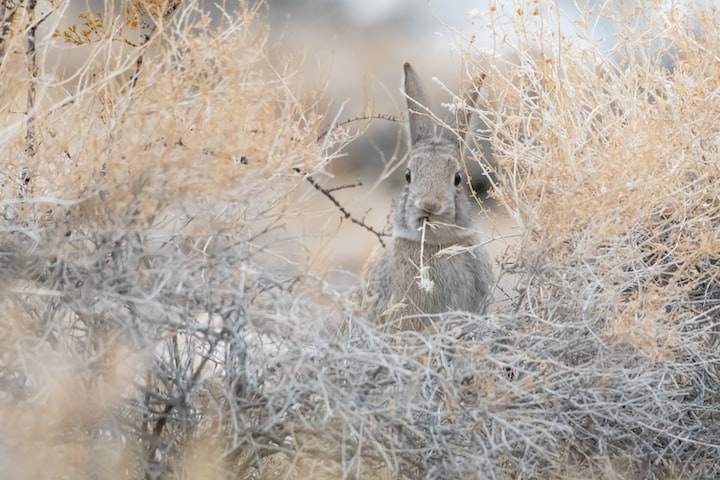 Photo by Sydney Herron on Unsplash

It was a quiet summer day. Home alone and not sure about what I should do. Decided that I should go enjoy the sunshine and fresh air and see what creatures I may discover.

I was always curious about the world around me. I have never really grown out of it. Many people see that as a childlike trait. Why childlike? Is it really something for us to grow out of? To have a sense of wonder in the world around us. From noticing the tiniest lines and how they change in a pebble. To how a living tree stands alone in a landscape seeming to be devoid of any other life. Yet if you take the time to look and see, closer to the ground, there are many other plants, just smaller and many signs of other creatures, from a web of a spider, a lost wing of some beetle, to the track of a rabbit or a fox...

With this air of mind and a full content belly from a lovely lunch, I set off with no real destination in mind. Just taking in all the sights, sounds and smells. I walked the dirt track until my feet led me to an animal trail that I had walked on many times before. Past the old forgotten cactus garden and its hidden and forgotten mysteries, past the little dry and barren stream, that only seems to fill about twice a year. Past bushes some as high as my shoulder and others not much higher than my foot. Weave around that large rock in the trail, pass the nearly hidden rabbit warren, that appears to be abandoned. Yet I know if you look closely at one hole there is evidence of rabbits still living there. They mark their main entrance. All the time. If it doesn't gross you, they always leave poo there, and a few tracks can sometimes be seen.

Further along the trail, the occasional track of other animals crosses your path. Some you can identify, such as rabbit or fox. Over there is maybe a goat. The trail is mostly worn by sheep. Goats tend to stray off the path. A cow came this way, found an interesting spot to graze before moving on. Oh, look it has a calf in tow. How cute the smaller tracks are. Different tracks appear in the softer well-trodden soil, birds making their curious little trails. Maybe that one was chasing a bug. It weaved and jumped so much. Most creatures stay hidden, yet you know they are there, somewhere. The distinctive tracks of kangaroos too, when they slowly 'crawl' and graze along, to when they stand and bound so far away. The tracks of lizards, that look like a rope has been dragged side to side, begging you to look closer to find the marks of their feet and claws. With relief, you know a snake did not go past there. To the jumbo dinosaur like tracks of the emu. Making you more alert making sure you don't upset a father bird that might be looking after his brood. On second thought, what about old man roo?

You feel quite safe, most of the time. Yet you need to stay alert and be aware. Many creatures here can cause you strife, even the cute innocent looking ones. I have travelled a fair way in my wandering. I'll just keep going. Oops flushed out a few roos hidden behind one of those large bushes. More worried about me, I think. Watching and listening. Little birds such as fairy wrens flitting between the very prickly looking bushes. A wagtail or too. The boys always showing off their tails. Curious little things themselves they are. A red capped robin? Yes, it is. A male getting upset with me. Must have a nest nearby and possibly a mate. Always so brave.

Caws of the crows in the distance. Getting closer. There's the lone dead tree, with the large knots in its wood that appear to be a mournful face, near the fork in the trail. Left, or right? Left has a copse of small trees in the distance. Right has similar terrain for quite a while until you find a seemingly mysterious yard at the end of a trail. It has trees bordering it and plants that have taken over. Such a contrast to the land outside of it. What was it for? Why is it there? Why do things grow differently there? I choose the left. That small yard often left me with unease. I didn't feel ready to deal with its mystery at the time.

On I go scanning the horizon and the sky. Then I hear a long screech that turns my head to the right. In the far distance of the sky, I see almost a speck that could only be one of the eagles, that guard this land fiercely, and closer more within my sight another who I think is the one I heard. Onward I go, there is still plenty of time judging the distance of the sun in the sky.

Closer to the copse of trees. Further away from that little yard, going in a more North Westerly direction, there are many more tracks crossing back and forth. This area is travelled a lot more. We're getting closer to water in the mostly dry creek. Further up and towards the right of the track I see a small herd of unridden horses. They know humans, they are just left to roam as they wish. Not wild as Brumbies mind. I still decide to be cautious. They are big animals after all. I spot a curious outcropping of rocks off to the left and a bit away from the track. Out of curiosity I go and look.

Thinking I am far enough away from the horses I turn my back on them and squat down to take a closer look at the rocks and stones I found. So many colours, shapes and types. I pick up a few and turn them over to inspect them. Lost in my thoughts again. A few minutes pass and then I hear a distinctive snap of a twig not far behind me. I froze. Squatting down I'm not quite ready to run. I slowly turn my head and body to see what was behind me. Less than two metres behind me I first see hooves, and legs. Slowly raising my eyes, I find myself looking up the long nose of a young curious colt, watching me. I nervously look at him and glance to where I last saw the herd. They were still there, just watching us. I felt very intimidated sitting on the ground. In my fright, I had sat down on my behind. I didn't know how to respond. Stay and wait or get up and move slowly or run. Part of me wanted to run. I wasn’t prepared for this. I was partially in awe and longed to pet that soft nose. I stayed my hand. Doing a silly human thing I spoke to the horse, 'Hello there mate, you gave me a fright.' Its ears moved to my voice and slightly moved its head. It stood there as though waiting. I sort of crawled backwards away from him. He just watched. I waited until I was a few more metres away before I stood, still watching the horses. Then he suddenly snorted and spun around to gallop back to the herd. Made me jump. With mixed feelings, I watched and slowly went on my way towards the trees away from the trail. Near the closest tree, I sat down to take a moment to breathe properly and give myself time to register what had just happened.