by Chandler Olof 5 months ago in Short Story
Report Story

Clashing creatives in the workplace. 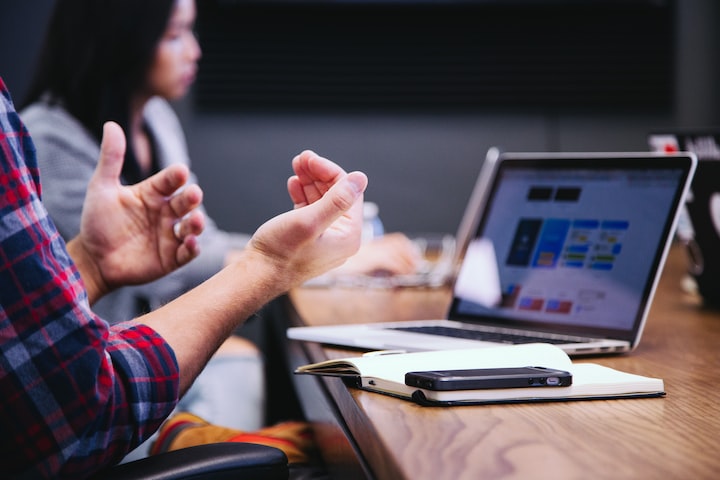 Photo by Headway on Unsplash

“Okay, so I’m thinking… an old man who takes on an Oz-like form. Uh, he knows all of apocalyptic history, which is important because few know how to read anymore and records are lost. Although, he uses everyone’s knowledge of his status to exaggerate his ‘power.’ Using smoke and mirrors, he convinces guests that he can alter time and space itself with his words; defying death multiple times and even changing the course of history and the future. Of course, many try to disprove him with logic, but to no avail, as his followers fearfully try not to provoke him. Quirky and clumsy yet always a step ahead, this wannabe is always trying to be something great in the apocalypse; something he never was during the Good Time.”

Other than the clunking ticks of the wall clock on the other side of the conference room.

I was about to sweat. I felt eyeballs from my boss, Mr. Wyatt, piercing me from across the room-length glass table. I couldn’t look. I just knew he had something to say; leaning back in his classic, egotistical, pen-to-his-lips-eyebrow-scrunched fashion. I glanced around for help to the other sorry suck ups that were in there with me.

“I think it’s good?” said someone.

“Shut up Bart,” demanded Mr. Wyatt. He leaned forward and stood in one predatory swoop and all eyes were on him. He started pacing behind his throne.

“Jacobs, what’s the hardest part about being an artist?”

“Uh…” I stammered, “isn’t that different for each artist?”

“No. It’s not. I’m telling you what it is because you obviously don’t know. The blank canvas. That’s the hardest part. Working with nothing. Scratch. Coming up with an original idea.”

I’d like to say I felt insulted, and I was. I don’t put out anything I don’t think is a good idea. Who was Mr. Wyatt to say whether it was good? Well, he was the guy giving the thumbs up or down on if anybody’s ideas around here get out into the real world. The place where they matter by making a difference. Here at NeoCraft, he is the final say. In the garden where our seeds grow into influence, he is the gardener.

And I knew that my seed was going to be uprooted before it was even planted.

“But Keith,” continued Mr. Wyatt, “you didn’t have nothing. You had five months of story building behind you to play off of.”

“But it’s not my story-” I interrupted.

“DAH!” yelled Mr. Wyatt as he pointed at me, “Are you not the editor-in-chief?”

I felt my past month’s work crumbling in on me.

“I’ve never let you down before sir,” I tried to defend.

“Yeah not before this promotion of yours. I move you up and the first thing you give me is recycled? I’m already starting to think you might not be able to handle the pressure.”

“Stop defending! You said it yourself, an Oz-like! People who don’t even know where Kansas is will see how cliché it is. I did not get NeoCraft to where it is riding coattails!”

My gulp might have been audible. Mr. Wyatt let out a sigh as he sat back down, rubbing his temples.

“Keith, there's a specific emotion of feeling drowned in others’ creativity. It is close to fear. Perhaps a fear itself of producing vapid material. Or an odd belief that everything has already been done so what can you offer that someone else can’t, right? That your work will look too much like another’s. There’s a Swedish word for this feeling amongst artists, this sorrow. It’s called vemödalen. Do you feel vemödalen Jacobs?”

“I considered my work to be inspired sir,” I mumbled in a final attempt.

“Do you feel it?” asked Mr. Wyatt, ignoring my comment.

“Then go back to your offices people. Jacobs will be forwarding you all an email about how it feels and maybe if y’all can understand a lick of what he comes up with, we might be able to save five months of wasted time cards! We have deadlines!”

Chairs slid out from under the desk in unison and we hurried toward the door.

I sat in front of my computer screen. That cursed little cursor, blinking in and out on the empty page. It’s presence felt like a heartbeat. Like Mr. Wyatt’s high blood pressure pressuring all of us to work harder. Grinding us down to get all of our creative pulp from us.

But even without that foreboding force, a white sheet of ones and zeroes stood before me. Mr. Wyatt was right. This is the most difficult part. And this was just an email I had to send out.

My trance was broken with a knock at the door. I turned, almost as if by jumpscare, to see Bart looking at me like he was asking permission to come in. I waved him in and tried wiping the bags out from under my bloodshot eyes.

“Hi. You know, I really did think your idea was good,” he said.

“And, I was also thinking…” he continued, like he was trying to impress me, “for a guy who doesn’t like clichés, Mr. Wyatt sure is your average stick-in-the-mud kind of boss you know?”

“Ironic huh?” I said with a smile.

Bart smiled and sat across my desk, giddy that I liked his quip. As clever as it was, he followed it with an awkward silence, leaving me wondering what he was doing in my office. Which I asked him.

“I think I might quit after today,” he vomited the sentence out like one long word, not giving the taste of the thought any more time to linger in his head.

“We’ll, just seeing how Mr. Wyatt treated a great mind like yours… I’m not even as talented as you. How am I going to get anywhere in this company? I don’t want to work for a person like him anymore.”

I nodded, entertaining his perspective for a moment.

“Thanks,” I began after a quick glance at the very blank computer screen, “And that’s fair but, come on, you know he’s not always like that,” I advocated.

“Well aren’t you tired of it?” he asked.

My thoughts delved into all the imperfections of not just Mr. Wyatt, but of NeoCraft, of the people around me, even Bart. They traversed the dangerous critiques and slippery slopes of indignation. Despite how vast and treacherous that mountain is, they were only caught on it for a moment.

“No, but that makes sense,” replied Bart.

"No disrespect Bart, just a matter of fact," I began, "I've worked here a lot longer than you. I've got more ammo than you in terms of what's wrong at NeoCraft but... I'm not gonna."

I almost tripped up my words. I had thought about this angle for a while. I guess I was just shocked that I actually took it. Without trying I felt this sense of honor wash over me playing devil's advocate. I hope my stories strike as much intrigue as I just did with Bart. I could see it all over his face. He leaned forward and asked, "Why?"

"Mr. Wyatt feels vemödalen. He's feeling it right now. That's why he's acting that way. If he signs off on anything we give him, NeoCraft gets attached to that. He doesn't want to get drowned out. I personally feel like I owe to him a little bit. He gave me my dream job. I don't want to disappoint."

"Kinda unrealistic," he finished. I raised an eyebrow.

"I don't think feelings excuse us to be inconsiderate of others," he said.

"Are you feeling disrespected?" I asked him.

"And can you also with a clear conscience right now tell me that you're also being considerate of Mr. Wyatt's feelings?"

All remnants of a smile had disappeared on Bart's face. So much so that a frown started to reveal itself.

"Are you trying to pull something on me? Why won't you back me up on this?" he asked.

"Well again, no disrespect Bart but, I've seen people act the way you are right now so many times in so many other jobs and it never goes anywhere. This is how you be the bigger person."

"Yeah? Well you tell yourself that while people walk all over you," he snarked as he stood. He spun and left, walking through the hallway with his arms in the air shouting about how he won't miss this place.

I reached for my mouse and clicked on his name to erase it from my list of email recipients. Although, our interaction gave me a bigger picture.

More stories from Chandler Olof and writers in Fiction and other communities.