by Marie Kynd 2 months ago in Sci Fi
Report Story 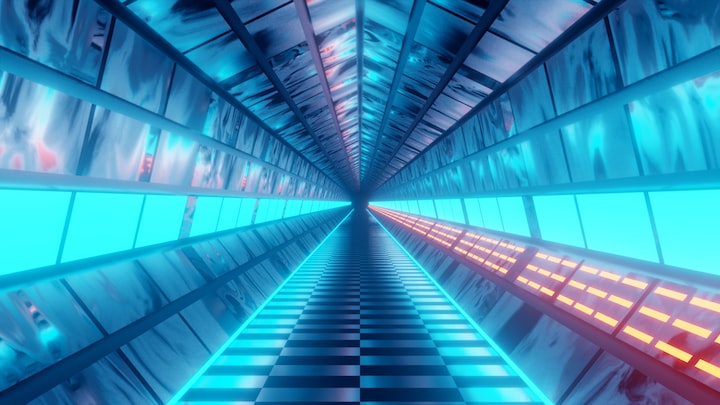 Photo by Nathan Duck on Unsplash

Nobody can hear a scream in the vacuum of space, or so they say. Though I'm not sure if I have a mouth, I had never thought to test if anything could hear me before this moment, lest there was nothing to see around me.

I looked to a distant silver object floating through the stars I had become so accustomed to. This darkness was my home, and this light was an intruder and still I approached it. Swimming through the dark ink of space around me and looking through a small glass on the side, slipping inside, through the material and hearing something I can't recognize.

A pattern of sound slightly changing. I swim through the now clear air. Was this light? Could this be a part of the warmth of the blue planet captured in a silver can? The sound pattern comes from a small box with a black circle that lets the sound escape it...was the pattern stuck in the box?

"Oh, I love this one." I hear jolting me backward and away from the box as a strange being with two legs and eyes reaches towards it.

"A fan of Mozart? You surprise me still." Another two-legged creature approaches as I sink into the darkness in the corner of a brown square holding other things not found among the stars.

"I'm a fan of all beautiful music." So the taller of the two creatures say, their voice deeper than that of the small one with long thin lines coming off their head.

"You're a fan of all beautiful music as long as it attracts a beautiful human to your intellect." the other teases as they smile—a friend...how nice it would be to have a friend.

I know some of the words they're speaking. Small silver cans that have run into me before have spoken them. They are humans. Two eyes, two legs, man and woman though I don't know how to tell which one is a man and which is a woman. And as the sound in the trapped box continues to play, I realize it has the name they used earlier.

This is "music." It isn't like the dark I swim in or the light from the blue circle; it is...warm like the yellow hot circle. I like music.

One of the humans reaches for the thing I am hidden behind.

"Leave that box of junk alone." The small one with the long strings on her head laughs. She has two balls on her chest, while the other does not. I wonder why. Instead, I focus on the thing that is now away from me, my mind repeating "the box." Small brown squares that hold things are called boxes.

The tall one sneers at her and pokes his tongue out. I wonder if that is a customary greeting to humans. But he takes the box that traps music in it, throws it in "the box of junk" and leaves. I can no longer live without the sound, the music.

I feel anger for the first time in awhile. I want the trapped sound.

I swim through the bright silver trap they are in, follow him through a closed piece, find a small room, and slink back to a dark corner. My seeing pieces hurt at the light I have not seen before. He changes the music in the box, and it instead finds a trapped human talking about humans scoring numbers with something called a "football." I feel anger.

"Mozart? Compared to this? She must be insane." The human mumbles. I must protect the sound in the box.

I venture forward and move to touch the short lines coming from my head, and the human jolts upwards and looks at me. I have not been looked at before. I like it. Even when a human seems so scared, he does not see me but feels me. I touch again but this time poke too deep as different words fill me.

"What was that? Time in this spaceship is making me lose my mind...still if Claire would just let me touch her every once, we may make use of our time alone. Maybe I'll use the drugs I brought here with me. Make it so she doesn't have a choice so I can stay sane. It would be her word against mine."

It would seem humans think thoughts as well. Not empty ones like mine, but meaningful ones. I remove myself and see the human's face dart around him.

"Hello? Who's there?" He says, looking around the light that is starting to make me hurt. Make my thoughts hurt. "I felt you looking!" He yells through the small space we are in. I hear sounds behind it as someone knocks on it. Maybe it's Claire.

"You good in there, Jeff?" Claire asks. I feel anger again at "Jeff's" smile as I watch them touch the strings on the top of their head. Human moves to two small saucers with handles, grabs a white round thing and smashes it to powder, pours it into one saucer, and fills the two with something thicker than what I swim in.

"Yeah..but will you come in here?" Jeff asks, a mean and evil look on their face even though the voice he uses makes human seems sad.

In a moment, Claire opens the piece that makes the room lead into the big room and closes it.

"I feel a little crazy up here. Will you sit with me?" The human Jeff asks as I feel angry again. Jeff lies. Humans lie. Claire grabs the tiny thing, and I swim towards it and push it away from Human 2's hand as it falls onto the floor.

"I could have sworn...." Claire says, looking around at me and through me simultaneously.

"That got pushed," Jeff says, looking as they both leave the small room, and I swim after them. Claire sits on a soft thing and starts pushing items containing small plastic lights before talking into a small box.

"Mission control, something is happening on the ship. We need you to scan the inside and surrounding are.Over." The human Claire says. Another voice answers, though no humans are in the silver thing we are in, the thing Claire called a ship.

"Mission control. You have a small entity on board. It seems to be in the control room with you. Do not engage." The other voice says. Entity? Is that what I was to humans?

"Starcruiser 332 here," Jeff says, pulling the small thing from Claire's hands. "I'm engaging the vacuum." the human says despite Claire pushing against him.

There's a sudden pop in the can, and I feel it sucking me into the small long tube I had seen on the rotating tins in the room.

No. I could not swim through slight darkness forever. I would not.

"They said not to engage Jeff!" Claire yelled, looking around the ship. "We don't know what this entity is!! We shouldn't trap it!" The human said, pushing into Jeff as human pushed human 2 onto the table, their head hitting the corner as suddenly they slept on the floor.

Anger. I swam harder than I ever had in my life, pushing past the vacuum and towards Jeff as I pushed harder than before and smashed into the head under the strings on his head. I felt myself move through his body, his body. Some of Jeff's body matched mine, the rest contrasting strangely.

"No, no, no, I don't deserve to die. No!" Jeff's thoughts circled through him.

"Yes, you do!" I said into his thoughts, my voice matching Jeff's who I was abosrbing was a "him." Panic filled the body I was now inside. I felt the vacuum in my hands and clicked what I now knew to be called an off button.

"332, do you copy? Hello? Is anything there with you? It's off our radar! Repeat. Repeat. Do you copy?" With five what were called fingers, my hands moved to Claire as I held this human.

She was a woman, and we were both now looking for life forms like the one I had been. Her...hair now felt soft in my fingers as my hands shook as I clicked the button to speak to mission control. "My boss" Jeff's thoughts continued sinking through me, but what was a boss?

"Copy that. Over." Mission control answered.

I looked at Claire and wondered if she would ever forgive me for pushing her as I picked her up, brought her to what Jeff knew as her room, and put her in bed.

How do I get out? I asked myself, pushing against Jeff's skin that I now swam in. A prison not unlike the vacuum he had wanted me in.

Nobody can hear a scream in the vacuum of space, or so they say. But maybe, just maybe, I could try it on board Jeff's starcruiser.

So I did. I screamed and wondered if I'd ever stop.

An english major that loves a good story, and loves writing one even more.

More stories from Marie Kynd and writers in Fiction and other communities.