What does it take to be 'masculine'? 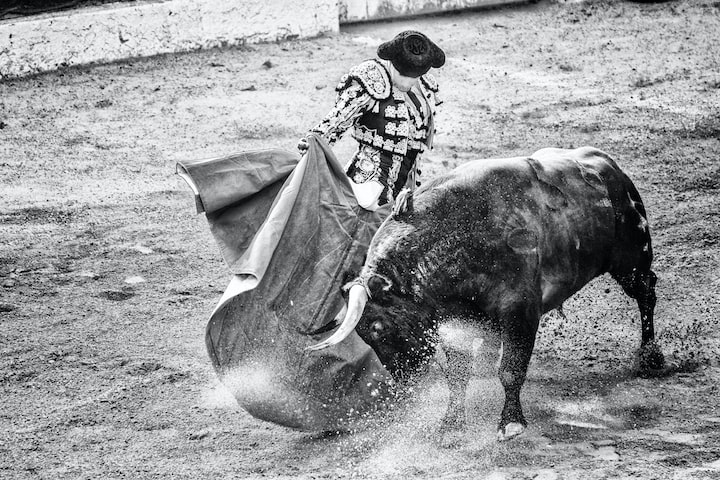 Photo by Stephane YAICH on Unsplash

It was 1925 in Andalusia, Spain. And it was an absolutely scorching summer. The chants from hundreds of attendees at a nearby corrida rung out in the air like deafening fireworks. A bull’s cries in the ring could also be heard; it hollered and hollered, as it knew it would not be too long until it lost its life.

Yet, Matias remained inside a barn completely away from the stadium of the corrida; he much preferred attending to his favourite animals than watching them attend to the bloodthirsty needs of people. Matias wiped his brow while he sat on a rotting wooden bench. Turning to stare at the sky outside a nearby window, he sighed after the sunlight from above very nearly blinded him. He turned his attention back to the bucket of feed in his lap and he set it down right next to a bull’s pen.

The beast blew out a gush of air with its dripping nose and blinked at Matias’ familiar face. Matias smiled and gently patted the bull’s head before it bowed from his reach to eat from the pail of feed.

The bull let out another gush of air from its nose, not bothering to look up. Matias chuckled and shifted the bucket closer to the bull’s mouth for easier access. He sometimes really believed that they could understand the words that he spoke to them. And he spoke to them often- living in a secluded area ensured that he barely got enough contact from the outside world. This also meant he did not have enough friends.

“Well, “that is the sacrifice of a matador family”, I suppose,” he muttered, “As father would always say,”

“What would father always say?”

Matias whipped his head around to find his elder brother, Tulio, strolling past the barn’s entrance, looking as triumphant and noble as ever in his traje de luces uniform.

“Nothing...he would say nothing,” Matias sighed, turning away to go on feeding the bull.

Tulio kept walking till he halted right beside him. It was only then that he noticed a familiar reddening brown paper box in his hands.

Tulio caught him looking and proudly confirmed, “I won.”

Matias rolled his eyes, “As always?”

“As always.” Tulio smirked, sitting down on the bench with him.

So Matias got an even closer look at what he carried; the brown paper box was soaked with vibrantly crimson blood from a severed tail and a pair of ears. He realized Tulio had cut them after successfully killing the bull as a trophy. Instantly, Matias scowled and looked away. Tulio noticed.

“Come on little brother, I know you’ll learn to cherish the art of bullfighting one day. It’s in our blood after all-”

“I wonder what was in the blood of the bull you just senselessly killed?” Matias added matter of factly.

Matias had always despised such an ‘art’. It was senselessly violent to the bulls; killing them for food was one thing...but slaughtering them day after day for entertainment? He couldn’t stomach it.

“Matias, for god sake,” Tulio rolled his eyes, taking off his elaborate marigold flower emroidered cropped jacket. “Don’t be like that! You despise the corrida but without it, our family would starve. It is what puts food on our table! People from far and wide come to see our spectacle because we’re famous,”

“I think I’ve heard enough!” came a gruff voice behind them.

Both brothers whipped around towards the entrance and found their dad, a tanned and balding short sleeved man, storming in.

“You hate the corrida, eh? You ungrateful boy! I’m sick of you never earning for this family. You’ve sat by the side lines for far too long, it’s time you became a matador.” He stormed over, clutching a lit cigar. “At least, I made sure you practiced enough, so you’re well trained. You are old enough as well,”

“Be silent, Tulio! I’ve made my decision. He must make his corrida debut tomorrow and kill the only remaining bull in this pen...or I’ll send him far away to to the coal mines, where he can be more useful,”

And with that, their dad made his foreboding exit out of the barn. Matias started fuming.

Matias slapped his hand away and paced away past the entrance. He went to a nearby pear tree and slumped down under it. Why did his dad always have to be so awful and cold? How could he force him to do such an atrocious thing? He couldn’t kill the bulls he lovingly took care of day after day, he just couldn't. He was already trained, his dad had ensured that, but he could never actively kill a bull.

But then he recalled; if he didn’t, his dad would banish him to the coal mines. He had heard awful tales of people succumbing to illnesses because of the horrific conditions there or dying in freak accidents. Frustrated, he wished he didn't have to choose. After, he screamed and punched the tree...then he watched some peaches fall right into his lap.

Later that night, he ate dinner with his family. You could cut the tension in the air with a knife. His dad wouldn’t stop eyeing him and soon, he ordered Tulio to make sure Matias’ bullfighting uniform was ready by tomorrow. Matias, of course, lost his cool.

“Father, you know I can’t kill animals for senseless entertainment!”

His dad laughed boisterously, “You fool- you pity bulls? They are ugly, angry beasts that would kill you whenever they got the chance-”

“Maybe they would be less angry if we stopped taunting and killing them? Why are you such a heartless bastar-”

Finally, his dad snapped and backhanded him from across the dinner table. “Sometimes, I think I birthed one son and one daughter. Why can’t you be more like your brother? Strong and...and...actually useful! Then I’d actually have a reason to keep you around!”

While tears betrayed falling, Matias shot up from his seat and ran out of the room. Tulio called after him but it was all in vain.

Matias shoved open the barn doors and rushed over to the bull’s pen. It was the only bull remaining so its abode was quite easy to find in the darkness. Matias had made up his mind. He didn’t care anymore if his dad would send him away...he would never sell his soul to become a senseless killer.

Matias cautiously unlocked the pen, with nothing but moonlight guiding his work. Finally, he let the pen’s door swing open and he immediately ambled out of the way and hid behind a wall, just before the bull raced out. Silently, he watched the black coated beauty rush out of the barn and off into the distance, already starting to kiss the horizon of a nearby field with every gallop.

I love writing! Thanks for reading :)

Receive stories by Jane Diokpo in your feed
Jane Diokpo
Read next: Glitching.