by Kristen Johnson 10 months ago in Fantasy
Report Story

When I chose to end my life, the sea had other plans 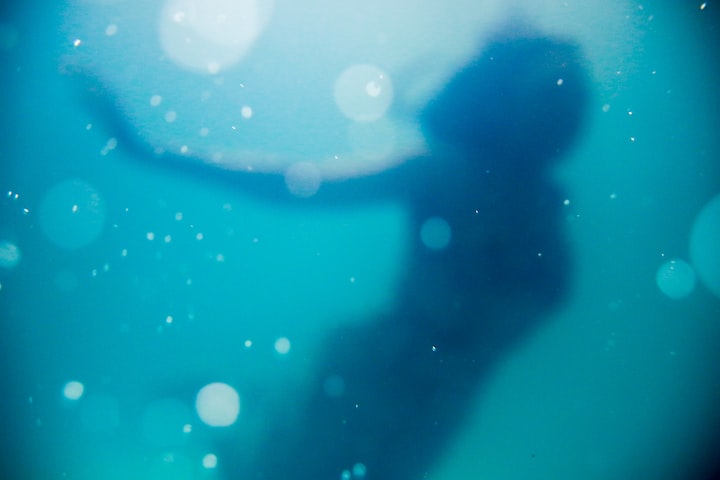 The ocean was calm, no wind or rain to whip the sea into angry, roiling waves. The sun, shining brightly from its lofty perch, was unimpeded by clouds, warming the ground beneath my feet. The day, so beautiful and clear, felt like a cruel insult. Shouldn’t it be raining, or at least overcast, on the day I chose to I kill myself?

Peering over the side of the towering cliff, my eyes nervously searching the water below. Were there rocks hiding beneath those rippling cerulean tides? I feared there might be somehow. Though I knew it was irrational, the thought of jagged edges tearing my body apart put me ill-at-ease. Would anyone be able to recognize my body, mutilated after such a fall? Dep down, I knew it did not matter. I would be long gone, far away from all the pain and sorrow that had plagued me.

Only twenty four hours had passed since Michael had left me, plunging an icy knife deep into my heart. He didn’t love me anymore, he had said. There was someone else, someone more beautiful and caring and supportive than I was. It did not take him long to leave, he had already packed his bags while I was at work.

Things had changed between us for some time, but I had never expected that he would leave me, especially not for someone else. That night, I slept alone for the first time in years, though I cannot really say that I slept at all. I just laid awake, crying into my pillow, feeling rejected and broken.

There is nothing else to live for if I don’t have him, I had told myself over and over again through gasping sobs. I decided to end it all where the relationship had began, on the cliff where he had asked me to marry him all those years ago. It felt symbolic.

As I stepped closer to the edge, my mind started to race. Don’t do it, a voice screamed inside of me, you still have so much to live for. Tears spilled down my cheeks, flowing like rivers down my neck and onto my chest. The wet fabric of my shirt didn’t bother me, all of me would be wet soon.

Before the voice could stop me, I held my arms aloft and, like a bird about to take flight, flung myself off the edge.

But I did not fly. Instead, I plummeted like a rock toward the rippling waters below. I watched in horror as the water came speeding toward me, the calming blue suddenly dark and menacing. As soon as my feet had left the ground, I regretted my decision.

It did not take long for me to crash through the surface, every inch of my body violently enveloped in icy cold water. Sinking fast, I watched the sunlight above me dim, the surface floating maddeningly far away. It got darker and darker until I could hardly see anything at all.

I looked around, wondering with vague curiosity how far it was to the bottom of the sea. Beneath me was only darkness, a void empty of life and warmth. I could not feel my legs as I tried to swim toward the surface, desperate for a second chance.

Looking down my body, I realized that I could not feel my legs because they were gone, replaced instead with one long, scaly fin, a mermaid’s tail. Even in the dim light, the scales glistened like forest green pearls. Forgetting that I was in water, I gasped, pulling the salty brine deep into my lungs. I was surprised that I did not splutter. Instead, I inhaled the water just as easily as air. I exhaled the lungfuls of water and took in another breath. The same thing.

I must be in a dream, I thought to myself. Flapping my tail fin, I began to move through the water as if I had been doing it my whole life. My heart felt as light as a balloon, swelling inside my chest as I propelled myself through the waves. If this was a dream, I did not want to wake up.

Without any thoughts of the jump, I swam through the water, seaweed tickling my body as I passed by. Schools of sea creatures floated around me, hardly seeming to notice my presence at all. I reached out and stroked the dorsal fin of a long silver fish, giggling as it scurried away. Recognizing the little puffer fish, I gently poked its belly, watching with glee as it swelled up like a tiny ball, floating safely away from me. I felt like a child, seeing the world for the first time.

I kept swimming, enjoying the feeling of the water against my skin. As my fin fluttered back and forth, I felt a thousand miles away from the life I had tried to leave at the base of that cliff. I thought about Michael, the way I had felt tethered to him for so many years, only to have it ripped away, like cutting the strings on a puppet. Had it really been the loss of love that had pulled me to such depths of despair, or was it the sudden feeling of not being needed, just drifting.

I hadn’t noticed that all the fish had disappeared from around me, leaving me to swim by myself. Coming to a stop, I looked around, trying to find any sign of my companions. Suddenly, a gray and white shark drifted past me, causing my heart to skip a beat. I was frozen in place as I watched the shark circle back, it’s beady black eye pointed directly at me. Watching me with interest, the shark continued circling, each time coming a little closer to me.

My instinct was to flee. But something about the shark kept me where I was, watching with guarded interest. It did not seem malicious, making no attempt to attack me or kill me. Instead, it just looked questioning, regarding me like an abnormal curiosity. When it was close enough to touch, the shark brushed against me, startling me. I was struck, understanding the gesture to be an offering of peace. Again, the shark brushed against me, this time the touch longer and lingering.

Skeptically, I put out my hand, brushing the top of the shark’s smooth skin in a gentle caress. When it did not swim away, I continued petting the shark, watching bemusedly as it seemed to nuzzle into my hand. I stroked the creature lovingly, wondering what it meant.

Suddenly, the shark swam away from me. Looking to the side, it turned back toward me, seemingly gesturing toward me. I realized that the shark wanted me to follow. Swimming forward, I came up beside the shark, and together, we swam out deeper into the sea.

We continued for some time, though to where I did not know. The shark was a comfortable presence beside me, a strange companion on this journey I had found myself on. I was not sure how to express my gratitude, so I reached out and lightly brushed the shark’s side, right behind its gills. The shark’s eye looked toward me and I felt like somehow, it understood.

It felt like we had been swimming for hours when I noticed that the surface was growing nearer. The rippling waves over head were lit with the golden rays, looking playful and inviting. I had not realized it, but I missed the feeling of sun on my skin. Thinking back to my life on the surface, I remembered the feeling of grass under my feet, the sun on my face, wind in my hair. It was then that I started to think of my family, how they would never know what happened to me, never know that I was still alive, just trapped beneath the ocean waves. Would they mourn for me, I wondered. Before, I would say no, but looking up toward the world I left behind, I knew they would.

Coming quickly into view, the bottom of a boat cut through the water, the engine roaring as it grew closer. As it got closer, it slowed, the rippling silhouette of a man coming into view. He reached down toward me, his arm breaking through the surface

I looked over toward the shark, but the shark was no longer there. It had brought me here, leaving me to make the decision whether to stay or go. The people were looking for me, it had known that. And it knew I had to go.

But I was not sure if I could go. Could I possibly leave behind this life I had found beneath the waves? Would it be worth leaving everyone I loved?

I knew the answer. Stealing my resolve, I reached up, grabbing the outstretched hand.

Roughly, I felt arms wrap around my body, pulling me out of the water and laying me down in a puddle on the floor. Hands pressed into my chest repeatedly and I started to cough, the water coming out in spurts. I gasped for breath, the alien feeling of air burning my lungs. Expelling the last of the water, I rolled over, looking down toward my fin. But there was no fin anymore. Just legs.

More stories from Kristen Johnson and writers in Fiction and other communities.