by Nelly Black 5 months ago in Fan Fiction
Report Story 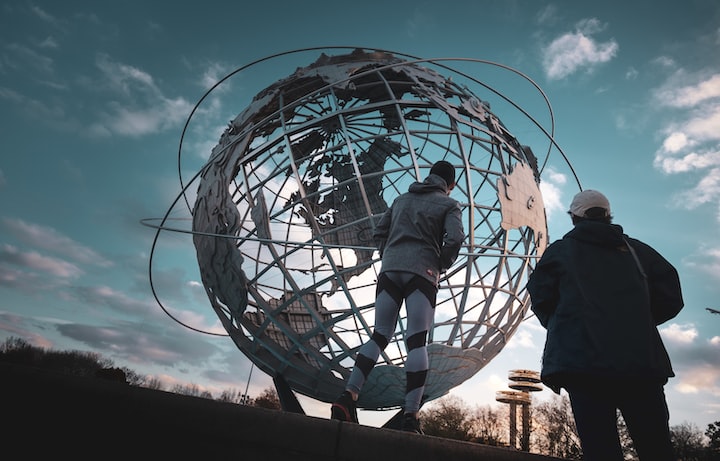 As Saeon rung the doorbell to Sherry's apartment, he thought about how they would get out of New City without being found. He knew that by now, H.I.M. had his scouts combing the city, trying to find the transportation that he and Nessa had came in on. Now, as he heard Sherry asked him to identify, he gave the fake code that he used whenever he went out of his house secretly. As soon as the door opened, he entered the room looking for his Nessa and upon spotting her, he rushed to her and gathered her up into his arms and breathed a sigh of relief asking her if she was okay. After she assured him that she was okay, he then saw and acknowledged the others in the room. Ines made the introductions. "My beautiful daughter, Sherri, my eldest son, Mark, James, my third child and Kevin, my youngest." Saeon nodded to each one of them after the introduction and said, "I am very much in love with your mother, and I hope that you all are able to accept me as her husband. The boys rushed over to him and gave him a group hug and thanked him for saving her from Wizard, (Ines had told them everything). Sherri chimed in, "Our mother is very happy and we are grateful that you brought her to us. Without you we don't know if we would ever have seen her again, especially since our Uncle James passed away. Saeon was happy upon hearing this and quickly told them that they had to leave because the president's scouts were after him and he had to get back to his home so that it would not be discovered that he was not there. He asked the boys if they would take their mother to the building that the helicopter was on and watch her as she went inside. The boys agreed and after another all inclusive group hug Saeon left quickly and went back to his house as the boys took their mother and left with her in Mark's car to the address Saeon had given them.

Upon entering his house, Saeon discovered that everything was just as he had left it. Now he would go back to H.I.M. and let the office know that he was going back to his wife and gather the things that New City needed and bring them back in three months. He would have to talk to the president . There shouldn't be a problem because he was bringing something that the whole city would benefit from. He decided to stop by the only emergency hospital in New City and ask if they might need any medical supplies equipment or vehicles. An ambulance and x-ray machine was what they asked for. It didn't matter what they asked for, they would get it. Sherri had also requested the same as well as penicillin and antibiotics. There was quite a list. And, of course, they would get everything. But now, back to the issue at hand. His only goal now was to get things settled at the office and back to his Nessa.

As Ines went hurriedly into the building, her sons watched anxiously hoping that their mother got to the rooftop without incident. They would wait until she signaled with her flashlight that she was safe before they got back into the car. Two minutes later she flashed the signal. they got back into the car and waited a good while longer to see if anyone came out and they would wait also for Saeon to enter the building. Only then would they be convinced that their mother was safe. Five minutes later they saw two men dressed in security uniforms exit the building and get into a black van and leave. They waited about ten minutes more before thy saw Saeon get out of a taxi and go into the building. They also saw that the taxi was waiting. This was their cue to leave.

Ines was in the helicopter in the privacy bedroom when Saeon entered. She told him softly that there had been men that came out of the elevator after she entered the helicopter. They came and put five tracking devices on it and left. Then she pointed out exactly where they were placed. Saeon collected each one and asked Ines to give him five hundred dollars for the taxi. He took both the money and the tracking devices to the taxi driver and asked him to deliver them to the H.I.M. office. After returning to the helicopter, Saeon hurriedly left the building and New City. He was still angry at the president for trying to get to his Nessa. That was the line that he should never have crossed. He had warned Sherri and the boys that they should be very carful how they spent the money their mother had brought them. They wouldn't want to bring any attention to themselves and the fact that they had the money. Spend small amounts for a while, at first. If they wanted to make large purchases, they should find private owners who wouldn't mind selling to them off the grid. If H.I.M. found out about this there would be a major investigation followed by major problems. Everything would be confiscated.

Upon arriving safely back home Ines was still floating on clouds of joy. It had been a long time since she had been this happy. She had seen her children after all these years. In three months they would go back to New City and this time she would see her grandchildren. As she cooked the pot roast that Saeon had asked for, she thought about all the things that she would take to them. Sherri had pictures of them all in her photo album. One of the things that she would do was sit up a communication system so that she could keep in touch with them. She would provide laptops, computers, telephones, and all the technology they needed. Her genius husband would help her to figure this out. Thirty minutes later they were eating dinner, and this is when she brought it up. Saeon readily agreed and in exactly two hours later they slept. Tomorrow they would plan it all. But for the next two days they would be gathering the things to take to the outpost. Ines had suggested that they put in the orders and let the drones do everything. This time they would deliver everything by helicopter, and the drones would make the deliveries. Saeon and Ines would go and talk to the leaders of each community to see about everything else that they might need.

"Wake up, beautiful. We've got work to do," Saeon stated softly. "Nooo, I'm still sleepy," groaned Ines. It seemed like they had just gone to sleep thirty minutes ago, after, a night of intense lovemaking. She peeked out of one eye, saw that it was daylight and that she had slept a few hours and not just thirty minutes. Saeon placed a tray of food on the bed and handed her a washcloth. After breakfast and a quick shower, Ines got dressed and they started to work on instructions to upload to the drones. She would also check out the learning chamber that she had instructed them to build. Five minutes later they were off to Old World...

More stories from Nelly Black and writers in Fiction and other communities.