by Jeremy White 3 months ago in Adventure
Report Story

because we destroyed the earth 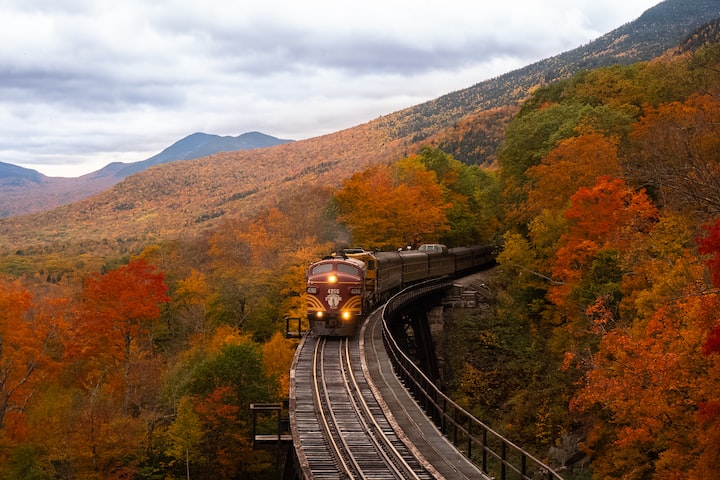 Photo by Balazs Busznyak on Unsplash

You wake up from what feels like a deep sleep. You have no idea how long you have been out. The first thing you notice is that you are on a train. You try and remember how you came to be on the train. As hard as you try, you cannot remember. You look for a ticket and you do not have one.

You start to look around the train. First thing you notice is that the train is going really fast and shows no sign of slowing down. Then you look at the people on the train. They are all different races and economic status. You do not think this is strange because you are in France and there are a lot of tourists around. As you look closer, what you do find strange is that it appears that all the passengers have a lot of luggage. It appears that everyone is carrying all their possessions with them.

You asked someone what is going on. They tell you that the world has finally turned on itself and is trying to destroy itself. You do not understand. They explain that because humans have been destroying the Earth for so long and doing nothing to try and fix it, the world sped up the process to try and reset itself. You ask what exactly did the earth do? They tell you that the polar ice caps are gone. They are all melted. The hole in the ozone layer is huge and has several holes now. The Earth is flooding from the melting, and you cannot breathe the air outside. You finally understand. You asked why are you on a train? They tell you that the trains are the only safe place for people, for now.

Your next thought is how long have you been out? How could you have missed all this? The answer to these questions will come later and be the key to saving humanity.

You get up and look around the train. You see, every type of person in every car. You are a little surprised. You would think that they might separate the rich from the poor or separate the people with kids and babies. This is your prejudice for the way things have always been coming into play.

You finally get back to your car and begin to look through the backpack and luggage you had with you. In the luggage was clothes for every type of weather, books, CD's, DVD's, DVD player, Shampoo, soap, deodorant and a few personal items. The personal items are a photo of your mom and dad. Dolphin figurines and a pride flag. In the backpack you find a computer and 12 backup batteries, a thumb drive and a letter.

You decide to read the letter first. The letter reads.

Dear the chosen one!

You are one of the few chosen people that will save humanity. Your DNA has been altered so that you can survive outside the train. You also have in your possession a laptop and thumb drive that has your exact genetic code and how to make it. It also has how to extract your blood and how to make a vaccine from your blood. You have people on the train that will keep you alive at all costs. Only they know who you are and will connect with you when needed.

You are shocked and can't understand why you were chosen. You are educated and have hyperthymesia. That may be why they chose you. Once you read all the data on the computer, you will never forget it. If something happens to your computer or thumb drive, you will know how to save the human race.

You decide you need to go for a walk. As you get up, you see a couple of people look at you. You wonder if they are your protectors. As you walk you notice that there are doctors, lawyers, construction workers, and every type of job that will be needed to rebuild society. You notice that this is a fancy train. Each person has their own sleeping quarters and bathroom. As you walk further, you see a few stores. Some are for the rich people with fancy purses and clothes. There is a grocery store full of cans and a few fresh fruit and vegetables. They have greenhouses that produces the fruit and vegetables. Towards the back of the train, they have livestock and a slaughterhouse. This train has everything we need for survival for a long period of time.

You spend a few weeks just getting to know people and listening to their stories. It has been peaceful so far. One day you're reading a book and a man approaches you and tells you to follow him. You get up and follow him to an empty car. He tells you to open the Hatch at the top and lookout and breathe the air. Before you open the Hatch, he puts on a mask. You open the Hatch and look out at the world. You see a world that has been burned with a few fires still burning. You take a breath and feel revived. You get down and close the Hatch. The man takes off the mask and tells you that every two weeks you have to open the Hatch and breathe the air outside or you will get sick and potentially die. He tells you that one of your protectors will come and get you and bring you to an empty car and let you breathe the outside air. They don't want anyone to know that you can breathe the outside air.

You have been on the train for three months. Everything has been fine. Everyone has developed a routine. You have memorized everything on the computer. There is now meat in the store. You go every two weeks to breath the outside air. The world still looks bad. Now you are surrounded by water below you.

Two weeks later, you're looking out of the Hatch, and you notice something strange. It appears that a portal has opened up on the tracks. Half the train has gone through it already. You jump down and close the Hatch and tell your protectors what you saw. They do not know what to think. You go through the portal. You look at your protector. They are a different gender, and they are looking at you strangely because you have also changed gender. You open the Hatch to see what this world looks like. It is all forest that has not been burnt, but there is still water below you. The difference is the trees are taller than the water level. Another difference is that there are animals in the trees. In this dimension either they have learned to breathe the air on their own, or the scientists did what they did to you to the animals.

You enjoy opening the Hatch in this dimension because you can see living animals on the outside.

The changing of gender was interesting. You have always been interested in what it would be like to be the opposite gender. What takes time is you getting used to seeing the people you have talked to every day as a different gender. Most are embracing it. Some are mad and confused. They eventually become OK with it.

Two months later, you go to breathe outside air and there's a man inside the empty car you use. The protectors have set a meeting with one of the scientists. They want you to try and grab one of the monkeys. They want to study the genetic code so they can figure out why they can breathe the outside air.

You climb out of the Hatch and get on top of the train. You have a rope tied around your waist. They are holding onto the other end. You try to get a monkey to come to you. That is a failure. You then try to grab one as you go by. You manage to grab one. They pull you back in. You give the monkey to the scientist. They run off to study it.

A month later, you see another portal. This time you go back to your original gender, but your race has changed. Again, it takes time to get used to, but eventually everyone does. You cannot tell how this dimension is different because it is dark all the time. You learn nothing from this dimension. You have figured out that you change dimensions every three months.

For the next year, you go through different dimensions. Some have animals, some do not. You learn all you can from each dimension you go to.

For a year, the scientists have been working on a vaccine and making as many doses as they can. They have enough doses for everyone on the train and extra. The protectors and the scientists are the first to take the vaccine. The next dimension you come to is the one everyone around you has been hoping for. It looks like the world before all the madness. There is no flooding or fire. There are animals and vegetation. The only thing it does not have is people. You, the scientists and your protectors, study this dimension for two months. They have also been working on how to get into the conductor's car. It has been sealed off.

The next step is to inform everyone that you have a vaccine and that you have found a dimension that is safe. Everyone is excited. They are all happy to be getting off the train. You finally get into the conductor's car and slow the train down and also get everyone vaccinated.

You stop the train, and everyone gets off. You have to start from scratch. The construction workers start to build houses. Everyone is still using the greenhouse and the slaughterhouse from the train.

Two months later, other trains start to show up. Your group has built hospitals, grocery stores and houses. Everything as society needs to function.

The question is, have we learned our lesson? Will we be better and not destroy this dimension or will our ancestors be doing the same thing in 500 years?

I am from a small town. I have grown up surrounded by woods. I love to Write. I started out with poems. I did not start writing stories until I joined vocal. Writing stories is really fun. I have a Bachelors in Psychology.

More stories from Jeremy White and writers in Fiction and other communities.