by Mona Lazar 4 months ago in Mystery
Report Story

Nothing is what it seems to be. 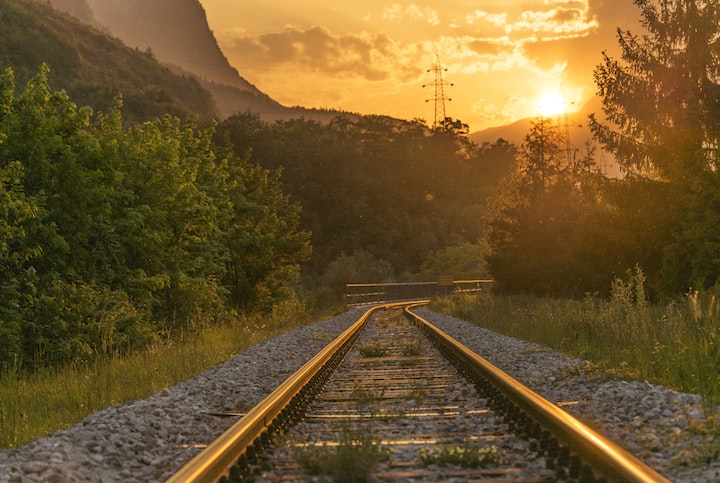 Photo by Ales Krivec on Unsplash

The horror! Is he going to die?

As Leah’s tired eyes were slowly opening to the unexpected reality of a train coach in motion, her first thoughts were: “Where am I?” and “What’s going on here?”

Right in front of her, a man is breathing heavily, his face covered in thick sweat. One of his hands is clutching the other, in a desperate attempt to find comfort in a sea of turmoil. He’s holding his own hand. His nostrils are opening wide, trying to breathe in as much as he could from the golden summer air around him.

Her thoughts start screaming at her while she jumps from her seat and lands next to the struggling man.

She looks around for help and notices there are 3 more men in the passenger car, seated together in another compartment, talking among themselves in low voices, completely oblivious to what was going on.

“Can somebody help me?” she yells out, her voice trembling with concern.

One of the men, dressed in summer slacks and a linen shirt, raises his eyes from the conversation and looks at her with a calm gaze and a smile. He gets up from his seat and walks toward her. The movement of the train doesn’t seem to affect his walk. He sits on the bench she left empty, puts a kind hand on her arm, and says:

Waves of shock and disbelief wash over her.

“What on earth are you talking about? What’s happening to him? We need to help him.”

”Nothing, it’s all good,” he smiled an all-knowing smile that pissed her off even more, squeezed her arm gently, and moved back to his seat where the other 2 were still engaged in their silent conversation.

Her brain was going into fight or flight.

He was a heavy-set dark-haired man, with thick arms and beads of sweat running down from his neck into his shirt.

He said nothing but looked deep into her eyes, like a sick puppy dog in need of care.

“Please,” he finally whispered, his eyes widening like 2 big molten chocolate pools, pleading for her help.

She clutched the velvety fabric of the bench underneath her and looked straight ahead.

A million random thoughts, ranging from “What can I do?” to “I wish Jason were here” to “Where am I?”, “What happened while I was asleep?”, “I’m so thirsty” burst in her head and keep her from hyperventilating just like the guy next to her.

I need to save him. Now.

"Sir, look at me. I will help you. You just need to tell me where it hurts.”

“Let me go…” his eyes were imploring.

The train of aimless thoughts came to an abrupt halt. What is he talking about?! She just woke up to him convulsing. Let him go? How? Where? Is this some game he’s playing?

She had no idea what to do, so she went for the first thought that popped in her head, fueled by the shock of his words. What if she just plays along?

And the very next second, with one sharp move of his hand, he pulls open the window next to him and jumps straight out.

Leah starts screaming and swiftly pulls herself next to the open window to grab him, but it’s too late. He’s gone and all she manages to do is look outside.

For a split second she thinks she sees his round sweaty face smiling widely from the field of sunflowers out there, but the very next moment everything is a blur and her soft body falls back to the velvety train seat. Her auburn hair rises like a wild octopus around her head, dancing in the wind from the open window. Her face is blank and huge tears are streaming down her hot cheeks.

He jumped… he jumped… A vivid dream-like state overtakes her mind and body. She’s in a stupor. Hours seem to have passed. Or were they only a few minutes? Her body feels catatonic and her mind numb. This didn’t happen. It was a dream. Nothing more but a train nightmare. Going nowhere, looking for nothing.

At one point one of the men rises from his seat and comes over to close the window. She hears something along the lines of ‘it’s going to be ok’, but she’s not sure. Maybe he didn’t even say it. The shock doesn’t let her wonder why nobody did anything.

She’s on a moving train and that’s all she knows. Her small body of flesh, cocooned inside the big metal body of the train, is racing across open plains and through dark tunnels. What just happened has to be nothing more than an awful dream that seems weirdly vivid. The only truth that remains is that she has no idea where she is going and why. The only reality is that Jason is still dead. And that she’s all alone in this world.

She remembers sweeping a golden curl away from his grey eyes. Right before the cancer made its presence known and the curls were still there for her to touch and love.

She loved and hated him for that. Together for the long haul? What is that supposed to mean? He left her and died. To hell with him, to hell with cancer, to hell with this world. She loved him… and he lied. Lied about the long haul, lied about being there. She was alone in a deserted world. Without him.

His last days were so horribly painful that they will be forever imprinted in her memory. His weakened body on the hospital bed, his golden curls gone. His grey eyes turned deep and heavy with pain and visions of the next world. She held his hand and smiled, trying not to make him feel even worse.

“I’ll see you on the other side, babe,” he whispered.

“Shut up,” she murmured softly. “We’ll see each other on this side.”

Underneath a thick blanket of morphine, he was deaf to her soothing words. He wanted the truth to be heard. Felt. Acknowledged.

“Live it up, gorgeous, until we meet again.”

And then a soft smile spread across his tired face, while his loving eyes were gazing far into a distance that she was not a part of.

Leah broke down and cried her soul out on the stark white hospital sheets that covered his once glorious body.

Jason passed the same night into that distance he was contemplating. A place where she could not follow.

More than a year went by. She lived her life going from day to day. As the train was shaking past yellow fields scorched by the lethargic summer heat, her past up until that moment seemed to be nothing more than a far-off memory. Not even part of her. A few feelings here, some fuzzy images there. Nothing to hang on to, except his name, tattooed across her life forever. Jason… Jason…

He was gone, but where was she?! Did someone just jump out the window not too long ago? Is this a dream or some sort of virtual reality?

“Did I hit my head or something?” she wondered, while her fingers decided to come alive and search her purse for anything that would connect her to this train ride to nowhere. The purse was empty but for a few used paper handkerchiefs, her wallet, and what looked like dried-out cherry pits.

No train tickets. Not on paper, not virtual, nothing.

She got up from her seat and with a swift gesture prepped her thin cotton dress the color of morning glory. She decided to go ask the men.

“Hi, guys, I’m sorry to bother you and I know this seems like a silly thing to ask, but I can’t find my train tickets.”

The other 2 were silent.

“Oh, that’s ok, but thing is that…umm… I don’t remember what happened. I mean… what year is it?”

She wondered why he didn’t seem at all puzzled by the question.

“And can you tell me where we’re going?” she continued.

“To Neverland”, he said with a sudden dreamy smile.

All three burst into roaring feats of laughter.

She just about had enough of this situation.

“Listen, it’s so not funny! I woke up on a moving train, I have no tickets, no idea where we’re going and what I’m doing here and I just had a horrible dream about someone committing suicide not too long ago. Do you think this is funny?!”

She was furious with them, with the situation, disgusted by their lack of compassion, and at the same time scared that she was confessing everything to 3 careless strangers who were apparently playing cards on this small makeshift table in the same coach as her.

They all looked up at her. Linen shirt spoke, while the others seemed like robotic silent shadows of him.

The world crumbled around her.

“Are you telling me that actually happened?” she said in a low voice.

‘Yes, but he didn’t commit suicide. When you looked out the window you saw him smile, didn’t you?” the man said matter-of-factly.

So it was real! Anger, rage, and a twist of madness all rushed into Leah’s blood and lifted up her right arm. With a screech, she blew the make-shift table across the floor.

While aces and kings jumped up in the air and flew across her conscience in a slow-motion modern dance, and her mouth opened up to say words that she would most likely later regret, the coach door suddenly opened.

Jason walked in, holding a cone of pink ice cream that was dripping all over his left hand.

“They have ice cream in the buffet car, babe”, he said in a cheery voice. “I got you a strawberry one, eat it before it melts!”

More stories from Mona Lazar and writers in Fiction and other communities.