In a town with mysterious marriage rituals, a woman learns what it really means to be a bride. 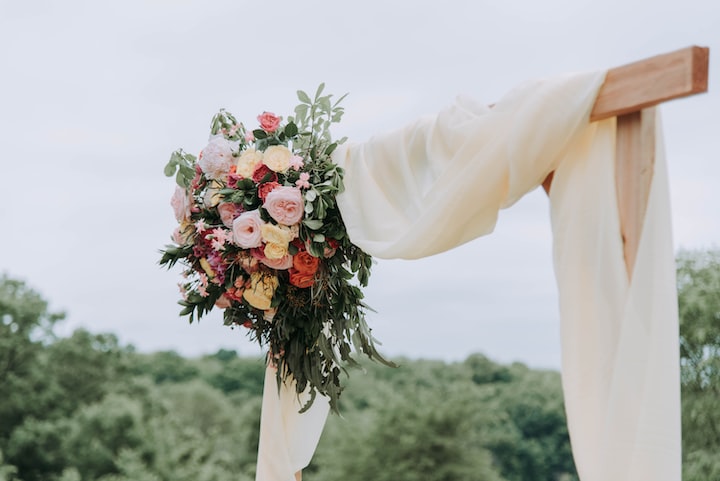 Until today, I had never been to a marriage ceremony. Those were private affairs only the couple, their parents, and the priestesses attended.

I did, at least, know what to expect. It wasn’t customary, but my mother shared with me all that she could, wanting the wedding to go as seamlessly as possible. She told me of the procession through the square, where everyone in town would gather to catch a glimpse of me. She instructed me how to navigate through the crowd, of what was and wasn’t acceptable behavior for a bride.

She also reminded me how lucky I was to marry in spring. I’d nodded in agreement, for indeed it was the perfect season, the time for new beginnings. She laughed at my naivete. “No, little one.” She settled my veil over my head with a maid's help, fastening one side to my red hair with a golden pin. “I meant the flowers.”

Our town was home to gorgeous white blossoms with specks of red and dark pink. They bloomed in winter and died in spring, blanketing the roads with soft, scented petals. Their trees lined the bridal procession route on both sides. And today, with the breeze coming in from the south, their petals drifted through the air rather dramatically.

Just the way Mother liked it.

The procession began after the afternoon ringing of the bells. I smiled. I glanced at the crowd and waved at the right moments. I stopped when told to, posing in pre-instructed ways that matched whatever backdrop lay behind me. In fact, I stood at the temple entrance for nearly an hour while the town painters scrambled to capture my portrait. The train of my wedding dress, fully beaded and heavy, cascaded down the steps like a magnificent waterfall. They liked that. And they liked how flower petals danced all around us.

I was at the brink of collapse by the time the temple doors closed behind me. A temple worker offered me a glass of water, which I gratefully accepted and consumed in one gulp. But a glance at my parents' proud, beaming smiles scrubbed away my exhaustion. I did it. And most importantly, I did it right.

Through the petal-littered fabric of my veil, I gazed at my husband-to-be. He stood at the front of the temple, by the altar, and he’d cleaned up nicely. I’d always known we would wed, betrothed we were as young children. It was a match intended to strengthen the ties of our families. He wasn’t the most handsome or the most intelligent, but he was kind, and he was fun. Fun was something I knew I needed in my married life, and I was glad he could give to me.

We started walking toward each other. Choreography dictated that we meet halfway and exchange smiles. He would give me the bouquet he was holding, flowers he’d handpicked as a wedding gift. We would then resume our pilgrimage to the altar, walking hand in hand. Once there, the priestess would officiate our exchange of vows. Simple enough.

I wasn’t disappointed by his flower arrangement. It wasn’t a large bouquet, but it had over twenty flowers of different kinds and colors. He’d even thrown in a few weeds, and I knew it was intentional. The weeds were his signature, the fun part of him that I enjoyed.

“Thank you.” It was so quiet in the temple that I heard the echoes of my whisper.

He sighed in relief, then held out his hand to me. We continued with the ceremony, moving forward together as the script instructed.

Up to that point, I’d had some inkling of what to expect.

And then I didn’t.

The priestess’ assistants brought in a large basin filled with water. They placed it on the dais in front of me and my groom, bowing to the priestess as they retreated. I was then made to surrender my bouquet. It was an instruction I had to ask the priestess to repeat, uncertain if I'd heard her right. What need did she have of flowers?

I watched in confusion as the priestess expertly plucked the petals from all the flowers. Then she threw them into the water, and started chanting in our ancient tongue. I understood the words to a point, but I couldn't make sense of the secret rite, and I was overtaken by fear.

My fear escalated when, without any sort of heat or breeze, the water in the basin started to move. It first appeared to boil, then it swirled like it was being stirred. I took a step back with a gasp of surprise, and I wasn’t the only one. My groom's face had turned pale, and he looked like he wanted to make a run for it.

I felt the same way once the petals rearranged themselves in front of my eyes. I only didn't run because my dress was too heavy to make a clean getaway, and my feet were already hurting in my heels.

The petals formed a pattern I couldn’t make out but reinforced my fear anyway. It appeared to be… the head of a creature? Or some crest, cleaved in two. I wasn’t sure. Was it even supposed to make sense?

“The gods have a message for you, child.”

I wanted to turn around and call for my mother. She’d been through this before, surely she understood what was going on? But I knew her far too well to realize that she would be most upset if I lost my composure any further. This was something I had to face alone. I suppose she didn’t tell me because it was forbidden.

I gathered my wits about me and took a step closer to the basin. I tried to tug my groom along, but he refused to move from his position. I didn’t blame him. “What…” I swallowed the lump that had formed in my throat, marveling at how I managed to speak at all. “What is it?”

I expected a cryptic response. Messages from the gods often were. If they were not outright riddles, they came laced with too many double meanings. But the priestess, contrary to my assumptions, spoke plainly, like she was one of us.

It wasn’t just a message. It was a prophecy.

My knees buckled, and I grabbed the sides of the basin to steady myself. I was going to die in childbirth. After three miscarriages. Our marriage would fracture under the weight of both our families’ expectations. Then it would crack completely with my death. “You are doomed,” the priestess declared, unflinching as she pronounced my death sentence. Her eyes bored into mine with such an intensity that I had to look away.

Then, her voice softened. “Will you take this man to be your husband?”

My head snapped up, and I stared at her in disbelief. “What?”

With a kindness that tugged at my heartstrings, she repeated, “Will you take this man to be your husband?”

I looked over my shoulder at my groom, then back at her, my brows furrowed in confusion. “I have a choice?”

The priestess gave me a sad smile. “A bride always has a choice.”

My groom started forward then, taking my hands in his as he pleaded. My mind spun, yet to grasp all that I’d learned. The gods had not only warned me of a grisly future, but they’d also given me the opportunity to save myself.

But what would happen to my family if I did? And to my groom? Gods, he was so frightened. In fact, he was soon on his knees, groveling. “Mercy, please,” he repeated over and over, tears spilling out of his eyes. "I... I would lose everything. What would my parents say? What would everyone think? Please."

Was this the reason only the brides had processions? To spare the grooms from humiliation, should they suffer rejection? Come to think of it, I'd never known a man who was getting married. The town would only learn of such developments after the ceremonies were over.

The urge to run back to my mother returned. I felt the need to confer with her, to seek her wisdom. If I did not marry now, when? The next match would have to be a tight-lipped secret, but there would be whispers were I to be seen with another man. And my parents did not appreciate having our family as the object of gossip. I was also of the prime age to wed and have children. Even if I’d die, I would be with an heir, fulfilling one of my familial responsibilities. The gods had at least promised that much. But would that be enough?

The priestess watched my movements like a hawk, so I could not turn away without her eyes narrowing in disapproval. This, it seemed, was my call, and my call alone.

What did I want, then?

I looked down at the petals floating in the basin. My groom was still pleading, but I could barely hear him as I retreated further into my thoughts. I closed my eyes and took a deep breath. What did I want? The choice was mine.

Slowly, I extracted my hand from my groom’s crushing grip. I stood up straight, then allowed myself a soft sigh in resignation. The ceremony must go on, and I had to burrow deep within myself to find the will to continue. I felt tears stream down my cheeks, but I did not wipe them away.

“Will you take this man to be your husband?” the priestess asked a third time.

My eyes were red-rimmed when I opened them.

Note: This was written in response to this prompt challenge.