The View from the Dome

When home isn't quite what it seems... 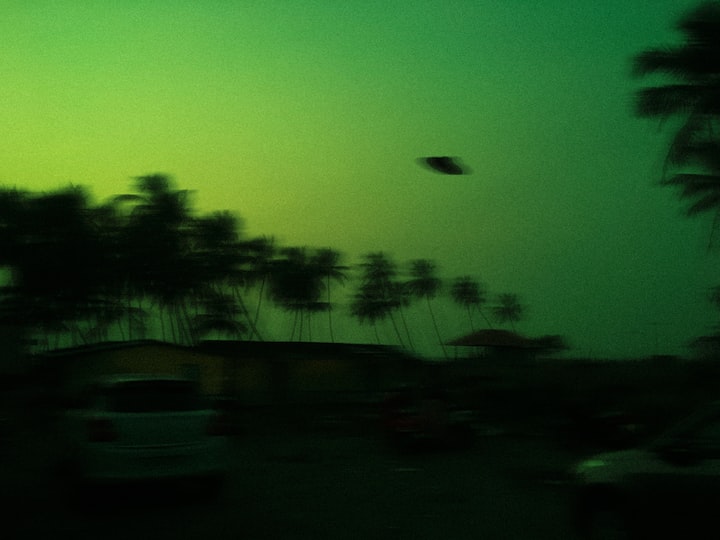 Photo by Albert Antony on Unsplash

The energy dome shimmered. It was blurrier than usual. That meant rain.

Rain. Emanuel liked how the word felt on his tongue. He hadn’t seen it. None of them had, apart from in pictures and the old vids. From what he’d read, many of their ancestors had disliked the rain.

He couldn’t understand why. It sounded wonderful.

Emanuel stood in Central Park, which was located in the center of their bio-dome. Grass grew underfoot and trees surrounded him. Birds chirped. Children laughed and played in a nearby playground.

“You’re staring at it again,” his best friend Jamie complained. “Why do you always do that? There’s nothing out there.”

“But there might be. Think about it. We’ve been living in here for almost 750 years. Who knows what might’ve happened outside during that time?”

“Ummm, everyone? Or did you miss those vids they showed us in school of what the world looks like now?”

Emanuel sighed. “Those were recordings, too. And they could’ve been faked.”

Jamie slapped him on the back. “C’mon, man, you gotta get over it.”

“Don’t the vids fascinate you? Seeing what used to be? I want to see it all—mountains, rivers, beaches, deserts, and oceans. They were so wonderful.”

Jamie spread his arms. “What could be better than this? Climate controlled, all of human knowledge at our fingertips, easy access to anything we want.”

“Don’t you get bored? Seeing the same things, the same people, all the time, and doing the same things day after day? Our ancestors didn’t live like that. They tried new food and met new people. They had different languages, different religions. Here, everything’s just the same.” Emanuel kicked the grass.

“And what’s wrong with that? You studied the same history I did. All those wars, the persecution, the racism, the sexism, the homophobia. Our ancestors destroyed the planet. And you idolize them? Do you know how messed up that is?”

They headed down one of the footpaths that led out of the park.

He didn’t know why he still tried. It wasn’t like anyone would understand.

“I thought you’d stopped doing this. Dude, chill. It isn’t worth it.”

Emanuel ran a hand through his hair. “You’re right. I probably just need some more time in the VR suites.”

“Don’t sweat it. It’s that big brain of yours. All that physics and math rattling around in there. It’s bound to knock a few screws loose from time to time.”

“That’s why I keep you around. To keep me grounded. It certainly isn’t for your looks.” Emanuel grinned.

“Hey! I’ll have you know that Jessica and I are going out this Friday.”

“Awesome. So you finally worked up the nerve to ask her out. It isn’t like you’ve had a crush on her for years or anything,” Emanuel teased.

Jamie flushed and looked down.

Emanuel nudged his arm. “You gonna go for your child allotment with her?”

Emanuel held up his hands. “Okay, dude, whatever.”

They fell silent. They left the park and walked through one of the residential sections. Towering skyscrapers reached up toward the sky. All the buildings were identical, even in the commercial and industrial sections. Strips of grass and small trees lined the roads. People rode hoverboards or zipped about the city using a network of clear tubes.

Emanuel asked, “You planning to see that new vid, Inside the Tube: Steven’s Revenge?”

Jamie shrugged. “The first one was great; the rest have been awful. Even the promos couldn’t make it look good.”

“And this is why I like the historical ones so much. At least they have variety.”

“This from the guy who complains that they only made 500 different Spiderman vids.”

Emanuel’s wrist communicator beeped, indicating that he had a new message. He read it quickly.

“That’s rough. Say hi to Sheila for me. When are you two going to make it official?” Jamie made kissing noises.

Emanuel responded with an obscene gesture and headed for the nearest tube stop. “Shelia” was his nickname for his favorite hydroponics water pump. He had names for all the equipment he maintained. The older engineers ribbed him for it, but Emanuel would swear that the machines worked better and were easier to fix when he spoke to them and called them by name.

He joined the line outside the tube terminal. When it was his turn, he selected Junction AA-Sub as his destination and entered the tube. With a whoosh, a jet of air propelled him upward, and an invisible force field carried him along. His ears popped. He was sure that the view from the tubes would be incredible, but he was moving too fast to open his eyes comfortably. The one time that he’d tried, everything was blurry, anyway. Air rushed past his ears, but the force field kept his stomach stable. Legend had it that everyone had puked while using the earliest versions of the tube network until they’d figured out that little trick.

A few minutes later, the network deposited him at Junction AA-Sub. It was on the lowest level of the dome, miles beneath the park and the buildings.

Pipes and large ducts surrounded the narrow walkway. Light came from flickering panels in the ceiling. Many of the other engineers complained that they found this place claustrophobic, but it was Emanuel’s favorite part of the dome. Down here, everything made sense. He headed over to the misbehaving water pump.

“Now, Shelia, what’s gotten into you today? Normally, you’re so reliable. One of the best.”

He found and repaired the wiring that had come loose. Shelia purred as the water started flowing again.

Then his communicator beeped again, alerting him to new problem. It wasn’t another of the pumps, but an issue with one of the air compressors. Keeping everything working was a never-ending task in this place.

He checked the offending air compressor, Bob. According to his diagnostic, everything was working perfectly. Yet the readings didn’t make sense. Bob was pushing out the correct amount of air, but something was diverting it before it reached the upper levels of the dome. Eventually, Emanuel uncovered a hidden pipe that disappeared behind a wall panel. How long had that been there? He’d never seen it before. The pipe was siphoning off the air, but where was it going? Using his tools, he followed the hidden pipe as best he could. He lost it a few times, but eventually, it led him to a blank wall.

He cocked his head. A blank wall? That wasn’t right. They utilized every millimeter of space down here, to the point where it was sometimes difficult to move. When he knocked on the wall, it sounded hollow. He searched for an access panel to open it, but there was nothing.

None of this was possible.

A series of beeps came from behind the wall. He pressed his ear against it, only to fall sideways through a barrier that was no longer there.

Emanuel was half inside a room he’d never seen before. Everything was sleek and white, and there was a large window with bright lights behind it. Loud beeping filled the air.

Two burly men grabbed him and hauled him to his feet.

Emanuel tried to pull free. “What is this place? Who are you people? Let go of me!”

No matter how he struggled, he couldn’t break their grip.

“What should we do with him?” the man holding Emanuel’s right arm asked.

A man and a woman stood in front of a waist-high console by the window.

“Could someone shut off those damn alarms?” the woman yelled.

The beeping cut off.

“Finally,” she muttered. She stared at Emanuel and pursed her lips. She had bright red hair and wore a silver heart-shaped locket around her neck.

Emanuel barely heard them. Transfixed, he stared out the window. This couldn’t be real.

It looked nothing like the Earth of the old vids, or even the recordings of scorched, barren soil and ruined cities that they’d seen in school.

The sky was purple with blue clouds. Hovering crafts zipped by outside.

“Where are we?” Emanuel asked.

The woman sighed. “He’s seen too much. You know the protocol.”

A sliver of fear cut through Emanuel’s chest. “What’s happening? What is this place? What have you done to me? I have rights, you know! You can’t do this!”

“So hysterical,” the woman said dismissively.

“Don’t you remember your first time?” the man at the console asked. “Everyone’s like that. Bring him here. Let’s get this over with.”

Emanuel planted his feet and fought against the guards, but they dragged him forward until he stood before the window. He almost vomited on the floor.

The dome was floating in the air. There was no ground, nothing apart from the hovercraft and the strange skies.

“Where are we?” he asked again.

“Earth, just not the Earth as you remember it,” the woman said. “My name is Melinda Jokvic, and I’m the caretaker of this place.”

“Who’s in those ships outside? I’ve never seen technology like that.”

“Those ships are piloted by the Brek, the race that now controls our world.”

“What?” Emanuel would’ve collapsed, but the two men held him upright.

Melinda sighed. “I’m doing this wrong. The vids you saw in school of a ruined planet are real. That’s what Earth looked like before the Brek came. Humanity was on the verge of extinction. We’d killed ourselves with our own violence and greed. The Brek say that they found a little girl struggling to survive, and they offered her a choice. We are all living the results of that choice today. She gave them our world in exchange for a future. Humanity’s future. The Earth of old is gone. It’s been terraformed. You couldn’t even breathe outside now. The Brek require a cyanide-arsine atmosphere.”

Emanuel’s heart beat rapidly in his chest. His palms were clammy. “How are we still alive?”

“The Brek created this place. It’s entertainment for them and a home for us. We live in the equivalent of a human zoo.”

Everything in Emanuel rebelled at what he was hearing. “No. This can't be.”

“We’re the most fortunate humans in history. There’s no more war or disease, no conflict. Every person has a home, a job that suits them, and enough food to eat. The Brek gave us paradise.”

Melinda said, “And now you have a choice. You have three options. Join the ranks of those who know the truth about this place, those of us who really keep everything running. Or we could erase your memory. It’s a risky procedure that may cause permanent damage, or you might be fine. If you can’t stand the risk, we could also arrange for a tragic workplace accident. We can’t just leave you with this knowledge. It could destroy everything we’ve worked for. So, choose.”

Emanuel’s head spun. He didn’t know what to say. The view outside was like looking into an alien sky.

It wasn’t their world anymore.