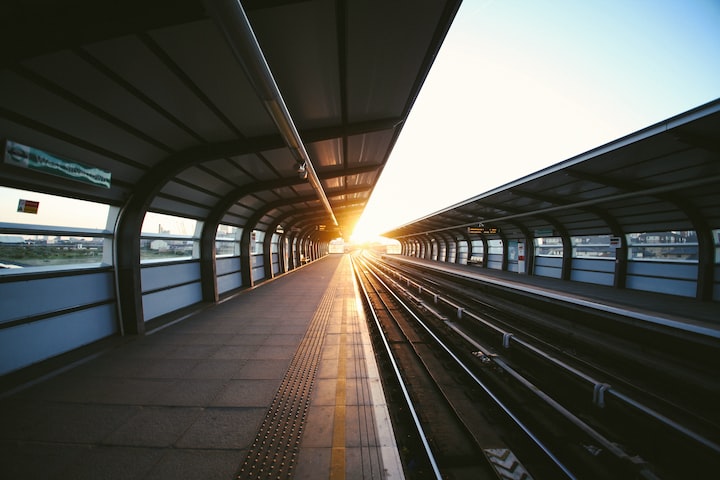 Photo by Charles Forerunner on Unsplash

All stories really are about leaving town or arriving in one. She was trying to remember who said that, and it bothered her that it was a mystery; also, the train’s slight lurch pushed her back into her seat, and that had irritated her neck. In first class, she thought that she would truly be able to set her thoughts down, whether in a notebook she had just bought and really did not need, or in the space on the screen of her cell phone. She stared at both of them and tried to remember.

Memories were not helping her. It had been over three years since her return home, but she had reasons for letting that much time pass. A funeral, several bad moments at the kitchen table with her siblings, one very unsettling letter, and then general indifference all led her to this trip. But at least she was trying. How easy would it be to go back home after all that, and her now having to share some news with them that they really would not want to hear? The lights went out for a moment as the train prepared to leave. She closed her eyes.

She would keep that face in her thoughts for the rest of her life, but at the moment it was only a slight annoyance as she opened her eyes and blinked. The young woman in front of her looked like a university student. A hoodie with the name of a school she had applied to and failed to be accepted by was covering her very thin shape. It was a rich dark blue with red lettering which made her think of something she could not place at the moment.

She was pointing at the seats facing the other direction.

“Um, I think those are assigned. Or reserved.”

Those eyes looked past her at the car ahead of them. She also dazzled her with that smile (an unexpected look).

“They stop the reserves after a point, especially in first class. That’s how I got the ticket.”

The girl did not wait. Her large backpack came down hard into the aisle seat as she flung it and a leather jacket over it. She dropped into the cushioned window seat and took a breath.

“Actually, it is more business than first…”

“Yeah, maybe. But it’s still better than economy. So dirty and cramped, you think you’re gonna fall into your neighbour’s lap.”

Definitely a student, she thought. University or local college.

The student grabbed her hand and gave it a tug.

“I had the name Shannon haunting me for a long time, but that sounded like someone from an eighties movie, so I learned to hate it. So, with a slight change, now I got Shady.”

“All right.” She was beginning to think that there would be something to write about when the trip was over.

“Okay, that’s…different.” She looked for a pen in her handbag. “How did that happen?”

“It was from when I was a kid.” The lights dimmed again (they were about to head out), but this girl was not about to let anything stop her story.

“I was always the one who dared to go a little further than everyone else. I knew it and they knew it.” Her gum snapped loudly in the dark (Rachel had not noticed her chewing anything). It was interesting to hear in that space.

“How much further?” She really did want to know and maybe get this story in her head before writing it all down (using the pen would have been too obvious; would it be right to record her?). Rachel guessed it would be an interesting tale for their trip.

“How much? Well, I would, like, climb a tree a little higher than everyone else. I would do homework or read books that the teachers told us were just optional. Even dated boys that the others thought were too hot, or too smart, weird…just different. Yeah…”

The lights returned, and a slight hum and tremor passed through their car. Soon, there would be spoken instructions and the trip would begin. Rachel would be stuck with this young woman for at least six hours, perhaps, but it was not going to be a problem, she thought. A lot of material to put on a page here…

“So, you did what your friends wouldn’t dare to do?”

The girl looked out the window.

“Not all friends. Some were just people in class, the neighbourhood, and family, casual…acquaintances. Maybe I just did not want them to think that I was too scared to follow a challenge all the way. Didn’t want to have to be challenged most of the time, but…whatever.”

That smile… Rachel kept feeling dazzled by it, all done with the hoodie and jean set. It was too charming to ignore (was it obvious to Shady?).

“That’s what I thought at first. Like I was at the circus. But I was so wrong. Really wrong.”

“I did not know it then, but I was different.”

“No, what I mean is…I was an unprofessional.”

The announcement that the train was about to leave and make certain stops was announced in both French and English. Rachel heard the name of her stop in both languages, but she was not really paying attention.

Rachel now remembered the exact name and author of the book she had with her, but decided that this conversation would be a lot more interesting.

She leaned forward in her seat as Shady looked for her phone.

“You will have to explain that one to me.”

Was this a plan, a set-up? Shady smiled at Rachel’s words and cleared her throat for a moment. They both felt the hum of the train.

“What I mean is that I am incapable of being just one thing. Remember: I said that I always go a little bit further than the others. I dare things to happen. Well, I don’t just do that in one area, either. I push it everywhere.”

The train moved out into the sunlight and Rachel could see the glint in the eyes of the only other traveler in her car. Shady’s smile was only half there, not touching her eyes. Something was there, not caught in the light and the haze of the day. It seemed to come from somewhere wise and real.

“Trees, homework, boys… Nature, education, sex… I just could not stop at one thing when there was so much else out there to test and taste. I wanted to try it all.”

There were too many thoughts in this girl, thought Rachel. She could not pretend that she was uninspired by this student.

“Unprofessional is such a fantastic term. It just feels so right. But,” she was going to have to be careful with this, “do you ever just…stop?”

The fog of the early morning began to melt with the sunlight, making clear that the city was still waking up and getting ready for another day.

Shady was not smiling.

“I don’t think that is really a fair question, Rachel.”

Again, that smile. There was no way it touches those eyes. Rachel wanted her phone right now.

“No, I mean, eventually, you do get to a point where you have to stop or you just…”

“What?” Shady looked at her companion for the next six hours and stopped smiling. “Get hurt? Grow up? I tried all of that. By the time you get to be an adult, people always think… They just think that we have to change or be something that we can’t be. Don’t think that being a certain age means that you have to be a certain person. That never works.”

Shady found a pair of ear buds and put them in her ears. Her seat could lean back quite a bit as she began to nap.

Rachel stared at her. There were things that she wanted to say but could not think of as the train left the city and began to build speed. There was something right on the edge of her mind that she had to share

More stories from Kendall Defoe and writers in Fiction and other communities.