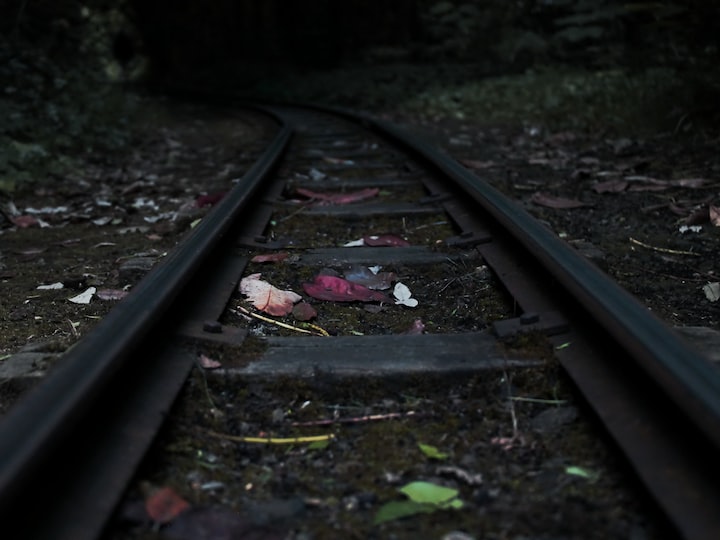 Photo by Tamara Gore on Unsplash

I awake slowly; groggy and confused. The sensation of swaying movement from what I soon recognize is a train car disorients me. The dim lighting does little to help me.

As my mind slowly processes that I am in a train car moving at full speed, the next thing I begin to notice is that I am not alone - every seat on the train seems to be taken. All the other passengers are in similar states of sleeping or waking groggily, each equally as confused as myself.

“What are we doing here?” ripples through the car.

“Where is this thing going?”

“How did we get here? Does anyone know?”

On and on, those questions continue to repeat endlessly as more and more confused passengers begin to stir.

Curiosity about our shared predicament gives way to uneasy suspicion quickly. No one seems to know how they got here, and the more aware we all become, the more we realize things are not right with this train.

The car is rife with graffiti of slurs and insults: on the walls, the seats, the ceiling and floor. Some is in paint, some in scratches, still more stitched to cushions and curtains. The windows are barred and painted black, and despite attempts to budge them, none give. Only a few faint lights illuminate our car, and many of them flicker weakly.

Eventually the person beside me stirs, startling me terribly. While I had taken notice of what I had assumed were crumbled clothes left abandoned beside me in the shadows, even with the rest of the train so crowded, I hadn't thought that there might be a person within them. As I regain myself after the start, I think I even recognize this person.

"Sam?" I ask, surprised. I hadn't expected to see anyone I know.

In the dark, I can't see his reaction well, but I do see his face contort with the effort of fighting off the same grogginess so many of us woke with. As a sense of orientation overtakes him, he too looks around bewildered.

"I have no idea. I woke up here, same as you and seemingly everyone else on here," I reply, motioning around at the other passengers.

For a moment, neither of us says anything. Then, Sam stands and begins rummaging in his pockets.

"What are you looking for?" I inquire.

"Well, if we did board drunk - at least if we did it correctly - we should have boarding tickets that will tell us what time we bought the tickets and where we're going."

Following his logic, I begin searching my pockets as well. A few other passengers close enough to overhear Sam also start to do the same. Before long, it appears everyone is checking their person for any scrap of useful information.

Time passes, but no one knows how long. No one has anything in their pockets at all and cell phones and watches are missing.

The lights suddenly turn off all at once, pitching us all into complete darkness. Screams and shouts and other commotion ring through the train car.

Once the clamor of surprise dies down, in the silence, a notable crackling sound makes itself known. With it, the return of the lights. Dim as they are, we are all a little relieved at their presence.

"Now that you are all awake," comes out a long, drawn, creepy voice from the train intercom systems, "welcome aboard 'The Unlikable'! You've probably noticed by now that this train is a little different than others. Decorated unusually, for example."

A long, heavy pause fills the air, tense with unease as everyone begins looking around the train, taking in the "unusual decorations". All manner of horrid things are written and carved into every surface of the train. "Murderer". "Whore". "Irredeemable". Each is written in a different medium, font, handwriting.

Another bout of crackling gains the attention of all before the same, eerie voice comes back over the intercoms.

"You are all vile, worthless, and irredeemable to someone, and so too shall be your fate," warns the voice. "Beneath each of you is a box full of coal. It is your duty to work together and use your coal to fuel the train. Should the train stop before it reaches your destination, it will detonate a bomb powerful enough to eradicate you all. You'd better hurry - the train has been running on near-empty for a while now."

Panic fills the train at the conclusion of this message. Many scramble to find the coal beneath their seats, but some, more angry than frightened, begin yelling obscenities and pulling apart anything they can and throwing things at the blackened windows.

Sam and I work side-by-side; the work is constant, and heavy, and the heat of so many bodies packed inside the train together is unbearably miserable as time drags on.

"What do you think... we did... to deserve this?" Sam asks me, out of breath from the constant movement of the fuel.

As our endless work continues, I start to glance around at the other passengers, Sam's question eating at me. Are we really all such terrible people? While most of the passengers are adults, I do spot children and teens in the line. My gaze lands on a young girl; a preteen - her belly extended with an expected pregnancy. I wonder about the circumstances that led to her pregnancy, shuddering at the most likely reasons. Next to her, a man equally covered in scars and tattoos. And beside him, what appears to be a simple churchgoer, her golden cross necklace catching the light periodically as she moves to pass coal.

People begin to collapse in the line: the heat is too much and the work too constant. Those left standing are flagging as well, and the speed of the train is noticeably less than before. Once again, the intercom crackles.

"Don't slow down, everyone. You must reach your destination or the train will explode. Keep up the hard work."

"Piss off," mutters Sam. He has long since removed his sweat-soaked shirt, and more sweat streams from him as he tries to redouble his pace to match everyone else now moving speedily to pass the fuel. My gaze lands on a horrid pair of scars on his wrists, and I wonder if his unsuccessful attempt to end himself is the reason he is here aboard this train.

The more I look at others, the more I realize just how many I hate for one reason or another. Even the pregnant girl; I resent her for the torment her plight brings me. The suspected convict beside her for whatever crimes he has committed. The good churchgoer for her faith, all too often pushed upon me by others sharing her religion. Sam for his suicide attempt.

And me. Good fuck, don't I simply despise myself?

The last piece of coal passes through my hands. I pass it on to Sam and he sends it further on down the line. I both curse our shitty luck at getting involved in this crazy ordeal and breathe a sigh of relief at the thought that it will soon be over.

A long while passes as we all try to catch our breath. The trapped body heat in the cars is terrible, but with the windows barred, all we can do is suffer it. We begin thinking of our return home - once we figure out where we've wound up.

At first, no one realizes that the train has started to pick up speed again, despite our fuel supply being gone.

But then comes a crackle on the intercom.

"Congratulations, everyone. You have kept the train moving to your final destination. Thank you for riding 'The Unlikable' straight to Oblivion. Please remain standing until the train has come to a complete stop".

"Thank fuck!" exclaims Sam, "But where the fuck is Oblivion?"

"I'm not sure-" I begin, before my words are cut off by screams from the front end of the train. A horde of people begin trying to push their way through our car. It isn't until I feel our train car in free fall that I realize just what has occurred.

Sam's eyes are full of fear too as we both realize just where our complete stop at Oblivion lies; at the bottom of a cliff. The very one we've fed our train to fall off of.