The Tomb Where Marigolds Grow

With his kingdom on the brink and under siege by invaders from another world, a desperate king turns to an exiled knight who represents his one and only hope. 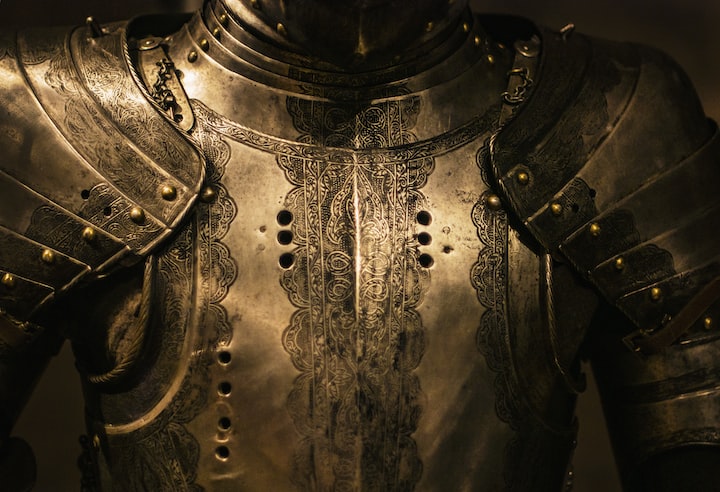 Photo by Nik Shuliahin on Unsplash

"Any sufficiently advanced technology is indistinguishable from magic."

Greetings, weary traveler. Through luck, or perhaps fate, you have found yourself in the company of Finton Merrybrook, the greatest storyteller in all of D'veen!

You come at a fortuitous time. I was just recalling the story of King Barrister, and his struggle against the Verack Horde. I see by your reaction that you've heard of them, those cursed invaders from beyond the stars that laid siege to the city of Giant's Bane.

Grab a drink, make yourself comfortable, and let us begin...

Prologue: Concerning The Realm of D'Veen

The realm of D'veen was once a flourishing microcosm of races both terrifying and whimsical, with humanity at the center of this strange and beautiful world. Over time, they all fell.

The dwarves constructed armies of clockwork soldiers and dove far too deep into the belly of the world. They awoke sleeping gods beneath the mountains in the east, and now are survived only by their rusted automatons.

The Magiri, strange beings without a true form or visage, who once bestowed the gift of magic unto the world, were consumed by their own pursuit of a spell that could grant immortality. They fell to death's grip before they could perfect the forbidden incantation.

The Aluthian Titans, elemental demigods who fashioned the realm from stardust within their celestial forge, departed to create a new world. The shattered remnants of their moon are a permanent reminder of their complete and utter failure, and a blemish upon the night sky.

Today, the continent of D'veen is populated only by scattered kingdoms of men, ruled by bickering leaders who rarely speak with one another.

It is here that our story begins.

I. The Tale of The Blackened Knight

The Verack Horde appeared on a day like any other. With the sun hanging high in the midday sky, they descended upon the kingdom of Giant's Bane in a sea of lightning and fire.

King Barrister of House Rigel exploded outward onto his balcony, his jaw agape in utter awe at the sight of their metallic vessels.

It was not long before they made their intentions known. From within their ships, out poured strange and terrifying monstrosities.

Among them were beings that resembled humans, but stood twice our height and wore full suits of armor that shimmered in both the sun and moonlight. From within their helmets that bore no space for eyes or a mouth a striking blue light escaped, one that would haunt the dreams of the King's knights until their last breath.

The first encounter was a massacre. Amidst the sea of corpses and scorched flesh, one knight emerged still drawing breath. His weapons and armor were augmented by the strange magics of the invaders, able to break through their armor and cleave through their flesh with ease.

It is said that, as he walked the great distance back to the gates of Giant's Bane, the ashes of his fellow knights clung to his once polished armor, leaving him scorched and black as the night sky.

It was this tale that would earn him the title of Blackened Knight, though Sir Alistair Wolfguard would not be given a warrior's welcome. For his use of the invader's dark arts, he was labeled a blasphemer and conspirator by the King's priests.

The King had little choice but to exile him for his crimes.

II. The Siege of Giant's Bane

The King's scholars named these invaders the Verack Horde. Verack, in the old tongue, translates to "The Creator's Folly." Indeed, King Barrister and his scholars believed these invaders to be a cosmic mistake, one that must be righted by the hands of men.

And so, the King sent word to his estranged neighbors, and despite all reason they answered. Meanwhile, the Verack Horde built towers of steel that dwarfed even the highest peaks of the castle in Giant's Bane.

It was not clear what purpose these towers would serve until it was too late. Over ten thousand men answered the call for help, but when scouts were sent to survey the battlefield, reports returned to the King's ear that the towers which now surrounded his kingdom reduced any and all who approached to dust in a flash of blue light.

The King and his allies were trapped like rats in a flooding cellar, and the water levels were quickly rising.

As food and supplies dwindled, the King became desperate. One morning, when the servants came to wake his daughter Neara, they found that she had gone missing. She left a note, offering only a single clue to her whereabouts:

Seek me out at the tomb where marigolds grow...

III. The Pleas of a Desperate King

The King knew that his daughter had not been taken, but rather, had departed of her own volition.

For you see, this was not the first time the King had seen the haunting blue light of the Verack Horde. Years prior, Queen Faeryn disappeared under mysterious circumstances, and all that the King saw before his beloved was gone forever was a flash of brilliant blue light.

No doubt when Neara witnessed the ominous blue light, she saw a way to get her mother back.

With no one else to turn to, the King summoned the Blackened Knight to his throne room. Alistair was reluctant to the King's wishes after his exile mere weeks ago.

"You cursed me, blackened my name like the armor I once wore in your honor, and now you come to me for aid?" Alistair asked.

"Your knowledge of their dark magic can turn the tide of this war!" The King declared.

"Not magic, such things have long left this world. The Verack Horde’s capabilities do not follow the path of magic. They are not ruled by chaos, but instead governed by order and structure."

The King knew of what Alistair suggested.

"You mean to say that the Verack Horde's weapons and armor are the products of science?" The King asked.

"Indeed. And though I know such practices are forbidden, I have learned of their trade, mastered their weapons, and survived against insurmountable odds. You would not see reason then, so what has changed?"

The King lowered his head.

"She has gone to them. My daughter, Neara. You once had a daughter, did you not?"

King Barrister had played the heartstrings of the Blackened Knight like a masterful bard, and it was a melody he indeed knew all too well. With his task set before him, the newly reinstated Sir Alistair Wolfguard went to work.

IV. A Battle For The Ages

Sir Alistair, together with his fellow knights and the bannermen who slept in makeshift tents just outside the kingdom's walls, went to work digging through the salvage of prior encounters with the Verack Horde.

Sir Alistair's knowledge allowed them to imbue their swords and spears with newfound power. Their armor too would now deflect projectiles that would otherwise burn them from the inside out.

The plan was simple: they would send the might of their entire army to overwhelm and disable the towers that laid siege to the kingdom. Amidst the chaos, Sir Alistair would slip into the neighboring forest and head to where the Verack Horde's ships rested. A place where marigold flowers grew in vast numbers, surrounding a monument to Queen Faeryn.

An empty tomb that nonetheless held the grief and the pain of both her family and her people.

It was a cold and cloudy day when the King’s army assembled on horseback, wearing armor fashioned from shards of strange metal, and wielding weapons powered by forces beyond their understanding. Sir Alistair Wolfguard led the charge with a bellowing war cry.

The knights raised their swords, brandished their spears, and held them to the sky as they approached the looming towers. Arcs of pure energy crackled through the air, but not a single knight was turned to dust. Instead, the weapons absorbed the energy until they pulsated with a power beyond measure.

With a single burst that burned brighter than a thousand suns, the knights sent the energy back towards the towers, shattering them like glass. Sir Alistair stole away from the army as the Verack Horde emerged to fight back. As the battle ensued, he made way for the tomb where marigolds grow.

V. The Fires of a Broken Heart

When Sir Alistair reached the tomb, he found the King's daughter, Neara, already locked in combat with a vast machine shaped like an elongated sphere, supported by a mass of metallic tentacles that flicked and snapped at Neara.

To his surprise, Neara fought with a dexterity and skill not seen among women of the realm. The Blackened Knight joined the fray, deflecting the machine’s relentless attacks.

"I was told to come and rescue you!" Sir Alistair shouted.

"I trained with my father's knights! I am no mere damsel in distress, Blackened Knight, though I welcome your assistance!" Neara replied between strikes.

In that moment of weakness, one of the metal tentacles wrapped itself around Neara and lifted her up from the ground.

A surge of energy shot through the tentacles holding Neara, but the attack was not meant to kill. Instead, Neara saw a flurry of images in her mind's eye. She saw her mother, strange rituals conducted by the Verack Horde, and watched as their scientists drained the Queen of her blood.

A soft light pulsated from within the center of the machine that held her.

Her sacrifice saved countless others. You must do the same, or our entire race will perish. You carry with you the blood that would save our people.

Neara clenched her fists and let out a scream of pure agony.

"YOU KILLED HER!" She screamed.

Neara's eyes began to glow with a brilliant crimson light. All around her flames emerged from her skin, building in intensity until they started to melt the very metal that held her in place.

Sir Alistair looked on in awe. This was no feat of science...

The flames exploded outward from Neara, tearing through the metallic beast that held her in place, scorching the trees, consuming the grass beneath her feet, and ripping through the ships that had brought the Verack Horde to D'veen. Sir Alistair was spared her wrath.

As the lights of the tentacled monstrosity flickered and died out, a final pulse of blue light shot out from the wreckage, winding up into the sky and traveling past the shattered moon that hung silently amongst the stars.

Sir Alistair ran to Neara's side and held her as she sobbed.

"It's okay Neara, it's over," Sir Alistair said.

The pair remained silent. Outside the forest, on the battlefield, the Verack Horde all ceased movement and collapsed where they stood. The remaining fighters all breathed a collective sigh of relief.

Meanwhile, the Blackened Knight and Neara embraced one another as the ashes of an entire civilization burned all around them.

Lover of dogs, gaming, and long walks on the beach. Content Marketing Manager by day, aspiring writer by night. Long time ghostwriter, finally stepping into the light. Alone, we cannot change this world, but we can create better ones.

More stories from Bradley Ramsey (He/Him) and writers in Fiction and other communities.