The Skull in the Garden 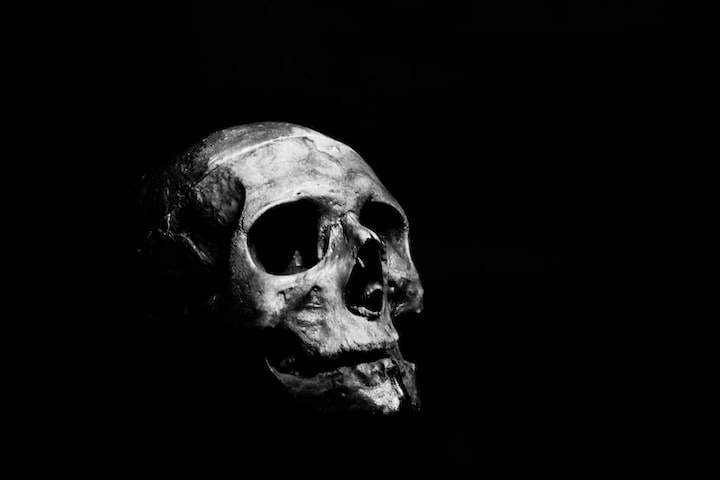 Photo by Ahmed Adly on Unsplash

The skull stared out from the center of the mantelpiece. Candelabras on either end of the mantel lit the room. Shari, sitting in an armchair, watched the skull as she stirred her tea. She took a sip, her eyes on the empty sockets.

She’d found it while gardening. Digging through layers of topsoil, she’d stumbled across it buried beneath the irises. She couldn’t tell how long it had been there.

She could tell it was human.

The candles flickered in a draft, throwing shadows across the dimly lit room. The house was old, a fixer-upper she’d purchased just last year. She’d been slowly bringing it back to life, replacing broken windows, sealing cracks in the walls. The garden was her latest project. It had more weeds than flowers at this point. She wanted to rejuvenate it.

She had not expected to find bones.

She’d cleaned the dirt off the skull as best she could. A few teeth were missing and there was a crack on the back of it, but otherwise it was intact. It shone white in the candlelight.

The draft increased, the room growing chilly. Shari’s tea warmed her as she stayed in her chair, eyeing the skull.

Then the candles went out.

Shari set down her tea.

The room turned frigid, her breath misting the air. The curtains at the windows stirred as if caught in a slight breeze. In the barest hint of light from the gibbous moon shining through the window, Shari could still see the skull.

Something brushed her skin, like a finger tracing the back of her neck. A gauzy whiteness, like a fog that had lost its way, oozed into the room. It moved through the dark toward the skull—toward the mint Shari had placed beneath it.

The fog engulfed the skull and its shadowed eye sockets glowed an electric green. The fog seeped inside as if absorbed by it. Shari held the gleaming green gaze.

She stood, strode across the room, and picked up the skull, cradling it in one hand.

“Who put you in my garden?” Shari asked.

An unearthly sound whispered through the air, not staying in one place and yet seeming to come from every corner. It vibrated, echoed, sounding like a missed connection on a radio.

“Who was your husband?”

“Well, you’ll be pleased to know he died two years ago from a stroke in this very house. It took a month for anyone to realize he’d died, his body rotting on the floor of the upstairs hallway. It’s one of the reasons I got this house so cheap.”

The skull seemed to smile even though it had no lips. Good…good… But what of the other?

Shari raised a curious eyebrow. “What other?”

Shari glanced toward the window. It looked out on the street. Across the road was a house, meticulously maintained. A light was on upstairs. Tim Brown still lived there, alone. She’d met him when he’d told her she shouldn’t be gardening, that she should let a man do the hard work of clearing out the weeds.

He was old. It would be easy to make it look like an accident—a fall down the stairs, a heart attack after dinner. He had no family. No one would miss him. No one would suspect.

The skull’s eyes glowed even brighter, the invisible grin gracing its lipless face.

“Now that we’ve gotten that settled,” Shari said, “would you like some tea?”