by Marie Sinadjan 7 months ago in Short Story
Report Story 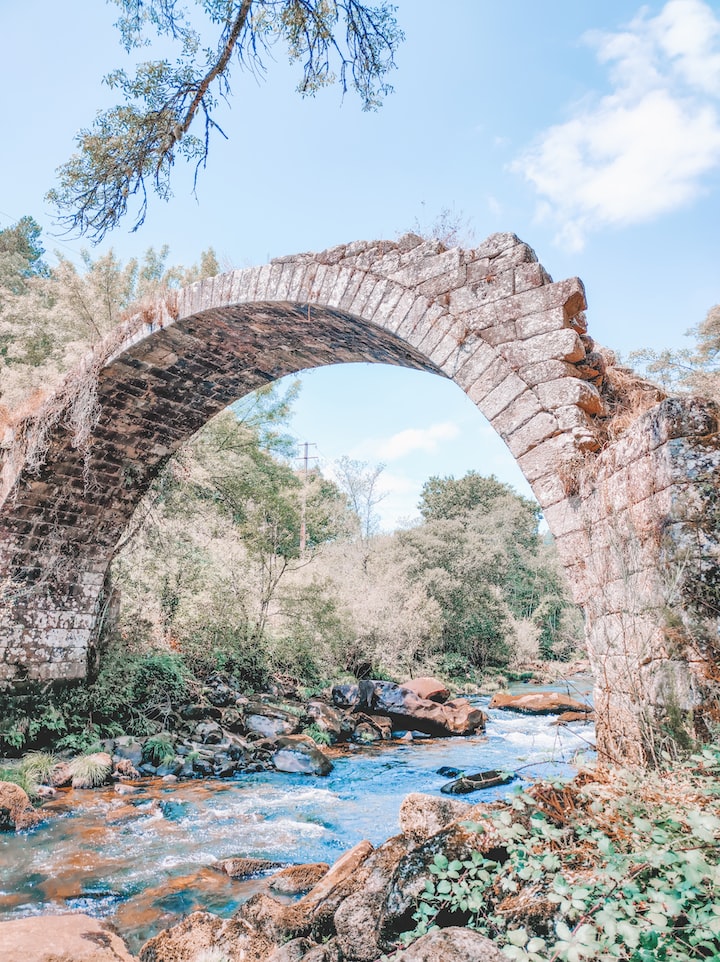 Photo by David Becerra on Unsplash

“Through, or over?” my brother asked as we eyed the ruins. There wasn’t much left of the ancient structure, but the archway still towered over us. The winding staircase hung even further up.

The site had inspired many tales throughout the years, but they were all speculation. In most stories, what stood before us was a castle. But it had also been a church, a military watchtower, a prison, and even a prostitution house. It depended on who you asked. Our mother believed it was a palace of wonder, later ravaged by war and the elements of nature. To our father, the more pragmatic of the pair, it was a pub. The stairs, as grand as they appeared, led up to nothing but the owner’s bedchamber and some rooms for rent. A loving couple as they were, they’d agreed to disagree.

Our parents had come to this wretched place to settle their debate once and for all. That's what they'd said, at least. I'd thought they'd grown tired of my brother and I's bickering, and decided on a quick weekend getaway. When they didn’t return by nightfall of the third day, our elders dispatched a search party. The men came back with only our mother’s signature red scarf, claiming to have found it lying on the ground by the ruins. That day, we also learned that they hadn’t been the first to disappear.

Vanishings, our elders called them. And they kept those quiet by blaming disease or summons to the capital. People died by the thousands each year from illnesses that had no cure, after all. That, or by the word of our queen, rumored to be as beautiful as she was mad.

Sensing my hesitation, my brother whispered, “You feel it too, don’t you?”

My skin came alive at his reminder, goosebumps erupting across the surface. He was right, because I’d felt it too. I felt it the moment we left our town’s northern border and crossed into the forest. There was something in the air, crackling like static. And though we traversed flat land, a mounting pressure grew in my ears. A warning?

But it was too late to turn back now. Instead, I adjusted the fabric around my neck. It was our mother’s scarf, which I’d left untouched until today.

“Well?” He tapped his foot on the ground, making crunching noises against the fallen leaves that blanketed the ruins like a carpet. A part of him must worry that I was backing out. Had I disappeared in my head for too long that he’d come to think so?

I eyed the stonework with renewed apprehension. Odd, the man who’d found Mother’s scarf couldn’t recall where exactly in the vicinity of the ruins he’d found it. That would’ve been helpful. Though there was also no way for us to be sure that the wind hadn’t simply carried the cloth away.

I reached into my pockets, pulling out a copper coin with my left hand. I held it up to my brother’s face with a flourish of my fingers. “Heads for the arch,” I announced, before tossing it up to the air and catching it with my other hand.

I slapped my hand into his outstretched palm, and our gazes locked for a moment. Only then did I realize how trapped I was by my indecision, for I hadn’t at all prayed for a particular outcome. Though that was nothing new. All this time he’d been begging me to join him in searching for our parents, and I could never quite make up my mind.

There was no drama to my movements when I drew my hand back to reveal our fate. “Stairs, then,” he declared, his tone victorious. He always did know what he wanted, despite being the younger sibling. I only nodded and made a noncommittal noise, retrieving my coin and pocketing it once more.

“Be careful,” he reminded unnecessarily as I turned to lead our ascent, and I rolled my eyes.

Well, he turned out to be right. Again.

Mere seconds after my foot landed on the first step, the world lurched. I lost my balance, and I would have fallen off completely had my brother not come up behind me. He caught me around the waist and joined me on the stone step.

I laughed nervously, my voice quieter than it should be. “The moss. It’s slippery.”

He rolled his eyes at me in turn, but there was a gravity on his face that he couldn’t quite hide. “I should go first,” he decided, and before I could voice my protest, he planted his foot on the next step.

We stared at each other in silence for a while. The seconds flew by like years. Then, moving so slowly it looked ridiculous, he dragged his other foot up to the stair. He became as still as a statue once more, and I was pretty sure I wasn’t breathing. When nothing happened, he beckoned me over with the slightest nod of his head.

I did the complete opposite, leaping up to join him. My eyes were wide as we held on to each other, waiting for the ramifications of our intrusion. The strange pressure in the air remained, like the forest was holding its breath as we made our climb.

To where, though? The staircase ended several steps away, suspended in mid-air. There was no ‘other side,’ though it made for a good vantage point.

We counted to three, mouthing the words to each other. Then we released a slow breath with an almost comical synchronicity. A sliver of tension unwound itself from our shoulders, and we relaxed. Or at least enough to stop clinging to each other like frightened children. Not that I minded that he didn’t seem keen on letting me go completely, holding on to my hand with a sweaty palm.

“Are we there yet?” I attempted to joke. It was my false bravado talking.

“Just a little more.” He dragged the toe of his boot along the grimy surface of the stone step, and I frowned as I followed with my eyes. The stairs were damper than I realized. Huh. I then saw the small pools of water on the steps, and I was quite sure those weren't there before.

“Only moss.” My brother flashed me a teasing grin, never one to pass up an opportunity to taunt me. For a fleeting moment, the temptation to push him off the stairs was strong. Anyone with a younger sibling, especially an insufferable one, would understand. “Watch your step, and we’ll be fine.”

I should have been more wary of the water. More of it trickled down the ruined staircase a step later. In the next, the pools started bubbling up like boiling water. I should have pulled him back and convinced him to abandon our foolish quest. Heck, I should have trusted my gut and pushed him off the stairs. But I did neither of those things, my indecision once more paralyzing me.

All I could do was scream.

A wave burst forth from the top of the stairwell, right out of the pocket of air that was at its end. It roared throughout its descent like an angry waterfall, and the water fell upon us in seconds. It took me under with such force that I’d blacked out, half of my brother’s name in my mouth in an interrupted scream.

When I came to, I was lying on the forest ground, among dead leaves and decaying things. A large black millipede went crawling past. It was close enough that I feared it was going to burrow inside my nostrils, and my body spasmed in response.

Only after I coughed up water did the memory of what just happened returned.

“Hansel!” I cried out, forcing myself to my feet. I wobbled and fell, my energy spent. That didn’t stop me from crawling around on my knees and searching frantically for any sign of my brother. It was an outburst disturbing enough to send the forest creatures skittering away. “Hansel!”

Then the pressure in my ears returned with a vengeance. I brought my hands up to my head and curled up into a ball in a futile attempt to protect myself. I felt pain, and then disorientation. I shut my eyes tight, but strange, dark splotches burned through my eyelids. And was that screeching I heard?

The moment passed, though I wasn't sure how much time did. But the woods once more grew still. I felt the sun on my face, and the breeze soothed my sorrow. Finally, I dared to open my eyes.

The taste of copper assaulted my mouth as blood trickled from my nose, but that wasn’t what confounded me.

The ruins were gone. In its place was a large cottage, untouched by time, gleaming in the sunlight. It was made of... candy? My stomach rumbled then, and I realized I was so very hungry.

“Oh, you poor child,” an old woman greeted from the porch, her smile warm and welcoming. “You seem a long way from home. Why don’t you come inside?”

Note: This was written in response to this prompt challenge.