by Nigel B. Uno about a year ago in Script
Report Story 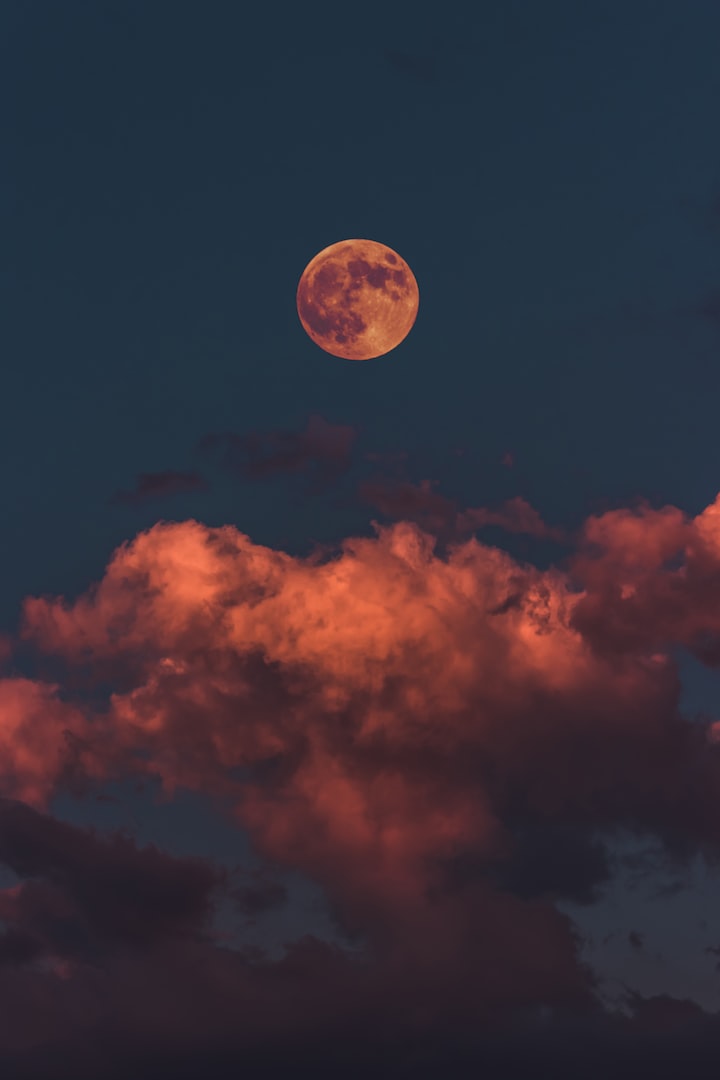 A dark dusty basement, at the bottom of a duplex.

A light shines from a doorway at the top of the stairs. Foot steps march down one by one. WE HEAR CHAINS clashing against cement.

We See hints of a man chained to the wall. As the foot steps walk closer, we see more of the man. He’s dehydrated and weak. The Cains slowly drag along the floor as he reaches out for mercy.

The silhouette of a woman pulls up a chair in front of the work bench and sits. Obscured by shadow the woman drab and somber sinks into her chair and watches this man in chains.

The Man (DAVID,30, handsome/nerdy gent) lays on the floor exhausted, stained in sweat and blood. He looks up at the woman, with barely any strength he points up at her.

The woman (PUMPKIN, 30, a hard woman the type that doesn’t flinch when getting tattooed) turns on a lamp sitting behind her, WE SEE HER FACE It’s worn, tired, sad and covered in some one less blood. She struggles to light her cigarette, her hands shake nervously. She drops the lighter on the floor, she crawls down to picks it up. Too weak and tired to reach for the lighter, she rolls on her back. Cigarette hanging from her lips she stares up at the ceiling.

As she lays on the ground DAVID wrestles with the chains, he jumps up to his knees, GROWLS and SCREAMS as he reaches toward her.

PUMPKIN unfazed, gazes at the ceiling her tired eyes in tears as DAVID VIOLENTLY PULLS AT HIS CHAINS AND WAILS. WE SEE CLOSE UP of the chains pulling at the wall.

DAVID is smartly dressed in a sports bar swiping through his phone.

He nervously taps a drum beat on his lap and looks around the bar.

He taps his phone to look at the time. Full of nervous energy he pops his collar and reassures himself.

We are cool, calm and collected. Just stay calm and give lots of compliments. We got this Buddy!

He raises his arms and breathes deep heavy rapid breaths.

So, who were you talking to?

Oh, I was just uh, visiting my- mind palace.

PUMPKIN looks at him confused.

Oh, it’s a mind trick. You create a location, any location. Not necessarily a palace; but you envision yourself there and you visualize success.

It helps me sometimes when my nerves are all over the place...

Are you nervous right now?

He smiles nervously. Pumpkin TAPS A CARTON OF CIGARETTES ON THE TABLE. She pulls one out and places it between her lips.

So you visualize success? And what exactly does a ‘successful’ date with me look like?

He looks back at her and he smiles.

David falls into bed sheets with a huge smile on his face.

PUMPKIN rolls out bed and puts her pants on.

And then some... Wait a minute. Where you going pumpkin?

David dismayed, sinks back into his sheets.

You’re not disappointed are you? I thought you understood?

Well, It’s just... I was hoping I could see you again.

Pumpkin JUMPS INTO BED and gives him a kiss.

CLOSE UP on PUMPKIN’S Face. She’s still lying on the floor. Tears run down her cheek. She raises her hand up to her eyes, she’s holding a locket dripping in blood.

DAVID still in chains, Rages and screams while pulling at his chains. CLOSE UP on the chains linked to the walls. The chain link loosely rattles back and forth.

WE SEE their relationship progress in QUICK CUTS

...Pumpkin and David holding hands in the park

...Pumpkin holding an umbrella over Davids head in the pouring rain.

...Both of them eating opposite ends of a hot dog as the laugh

...David waiting in from of a restaurant as Pumpkin runs up behind him and hands him a heart shaped locket, They kiss

...Both of them as they have a face time conversation with parents

...David screaming at Pumpkin as she throws shoes at whims he runs out the door

...Pumpkin cries into David’s arms as they stand in front of a hospital

As they walk back from the hospital, the sun sets rapidly, DARKNESS FALLS, THE MOON SETS.

CHAOS ERUPTS around them, people attack each other, people scream. Some of their faces take on a demonic form.

Pumpkin and Dave retreat as they witness a man BITE INTO ANOTHER MAN’S NECK, blood gushes around him.

WE SEE a woman vomit a stream of blood into a mans face before she bites into his neck.

As Pumpkin and David run home CAMERA PANS UP in the purple orange sky We see the moon has turned red.

Pumpkin and David watch news reels, channel after channel of people being attacked.

WE SEE them board up windows and doors to secure their house.

They practice martial arts in the basement, punching and grappling each other while watching jiu jitsu videos on YouTube from a laptop.

QUICK CUTS of Pumpkin and David slaying the infected over several days.

...David blast infected with a riffle

...David throws an axe into an infected’s head

...Pumpkin stabs a knife into one of their skulls

...As David swings an axe chopping off a head his necklace rips and his locket falls on the ground.

...we see them kicking and punching various infected

...They kiss in slow motion over a pile of dead bodies.

They make their way back home, drenched in the blood of others. David with a rifle strapped to his chest, Pumpkin with an axe slung over her shoulder.

David notices, his locket is missing he turns around and gestures to Pumpkin that he’ll be right back. He runs up ahead as Pumpkin trails behind him.

As David runs up ahead, Pumpkin notices an infected lunging toward David.

She yells at him, as another INFECTED ATTACKS HER. She quickly DRIVES A STAKE THROUGH IT’S HEART. As she looks back at David, and infected vomits blood into David’s face as another BITES INTO HIS NECK FROM BEHIND.

PUMPKINS SCREAMS, she runs up to David: chops one of the infected’s head off and stakes the other one in the heart.

DAVID convulses on the ground grabbing onto his neck as it leaks blood. He reaches for her.

Pumpkin grabs his hand and she cries painful tears.

WE SEE PUMPKIN crying from David perspective. WE SEE her reach for something. THE SCREEN GOES BLACK, WE HEAR A LOUD THWACK SOUND.

WE SEE PUMPKIN dragging David body through the basement.

We David moaning on the floor as he painfully coughs up blood.

Eventually Davids coughing subsides, he lays on the floor tired and exhausted.

Pumpkin sits in her chair, praying for him.

David wake up! Wake up!

She trembles while holding back tears.

Pumpkin’s backs away as she watches him fade, as he becomes more animalistic.

WE SEE DAVID’S Hand reach toward her as he rolls over.

Pumpkin staying in her chair cautiously leans toward him.

HE REACHES TOWARD HER, Pumpkin with a Half smile, cautiously reaches toward him.

PUMPKIN SMILES as tears drip down her face.

David, you were so beautiful... You can’t do this to me. Please, you can’t leave me baby. Please.

Pumpkin wipes tears from her eyes.

David, growls and pulls at his chains.

(In a raspy voice) I’m right here Pumpkin. Come to me!

David in another fit of rage violently attempts to rip his chains off.

As Pumpkin watches, disturbed by Davids change her tears turn to anger.

She grabs her axe off her work bench and marches up the stairs.

Pumpkin angrily strides back to the site they were attacked.

SHE MARCHES a straight and narrow patch as INFECTED LUNGE AT HER LEFT AND RIGHT.

Pumpkin wielding her axe and a steak, violently chops them all down, as tears stream down her face she unleashes all of her anger and aggression.

CLOSE UP on the heart shaped locket lying in the dirt. PUMPKIN’S BLOODY HAND PICKS IT UP.

Pumpkin covered in blood stares. Up at the ceiling, as DAVID RAGES in the background.

Pumpkin gazes up at the Bloody locket in her hand as a loose cigarette hangs from her lips.

Pumpkin rolls herself over on the floor and manages to look up at David.

She picks herself up and GRABS A GUN from her bench and points it a David.

Tell me you love me again.

David looks at the gun and breathes calmly.

Tell me one last time.

She kneels down in front of him. They face each other.

DAVID LUNGES TOWARD HER and BITES HER in the neck.

PUMPKIN smiles with a look of acceptance.

WE HEAR A GUN SHOT. David falls over on top of her with a hole blasted through his heart.

Pumpkin lays underneath David with a smile on her face. She breathes her last breath.