The Power of the Gods

by Christina Jacobs about a year ago in Fantasy
Report Story

For the Generation to Come 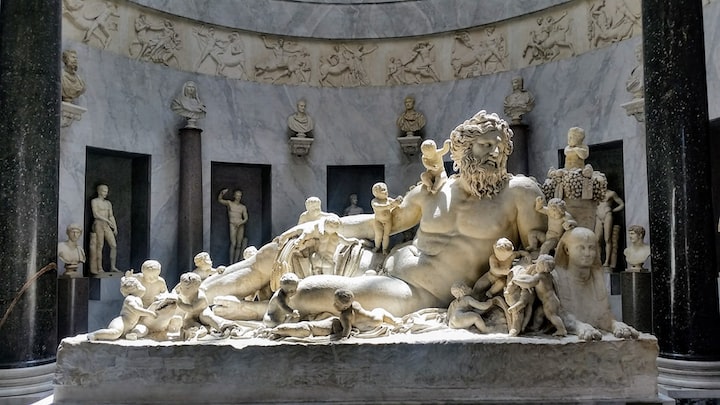 Photo by Francisco Ghisletti on Unsplash

The world is dying, and I have the burden of feeling it all. I watched helplessly as he drained the world of all the life I had brought into it. I saw him in his human form when he was giving his speech during the First Festival. As I looked up at him with his broad shoulders and dark skin, a surge of joy rushed through my body, and I knew it was him. Only he would create a problem, and then make himself the savior He loved to be worshipped. And despite all the destruction he has caused, I could not help but to love him still. I guess that is why after the festival was over I found myself walking towards the temple he lived in. I pushed through the crowd of people hoping to make it to the temple doors before he did.

Once I had gotten to the front of the crowd I saw him walk into the temple, and my heart dropped to my stomach. I had missed my chance. And in his last moment before entering the temple he turned around and looked directly at me. It was as if he knew exactly who he was searching for, and at that moment that our eyes locked, the surge of joy within me grew. It quickly disappeared when he entered the temple and I knew my chance to see him was gone. As I turned and started to make my way out of the crowd, I could sense that someone was following me. When I turned around, there was a guard behind me. He placed his arm on my shoulder. "Let me lead you to him"

He brought me into the temple where the floors and walls were lined with gold sheets. There were golden painted sculptures lined against the corridors. It was filled with elegance, but I wouldn’t have expected anything less from him. He was a god after all, and he was going to make sure it showed in every aspect of this short mortal life he has taken on. After a few minutes had passed, we arrived at two large metal doors.

When his face appeared from behind the massive doors, I felt myself get a little bit dizzy. There is only so much excitement this mortal body of mine can handle. I could see that he had taken on the same feeling as me as his hand shook at the edge of the door, but that could have also been the fear in him. He motioned me into the room and sent the guard behind me away.

"I wondered when you would show your face," he says to me as I take a seat on his large- feathered bed. "How could you be so sure that I would?" I responded to him. He walked to the corner of the room and pulled out a small container. From where I was sitting, I could see a metal chain hanging out of it. "You know we always have a way of coming back together." He pulled out a silver heart-shaped locket from the container. "An offering.", he says as he places the locket in my hands.

" You have always been a fan of offerings, haven't you? Even with little that these humans have, you have somehow convinced them to make offerings to you.", I said as I motioned to all of the trinkets and gemstones that were placed all over the room. "Why wouldn't they give me offerings I have given them salvation?", he responded

“Salvation from the chaos you have created?”

“Let’s not begin this argument again, we’re back together, let's enjoy it. It's been so long.” He gets on his knees and grabs both of my hands with his and buries his face into my lap. I took my hands out of his and stood up. Rage had taken over me as I remembered all of the pain I had been through “Yes. It’s taken me lifetimes to get my strength back after what you did to me.”

" I did what was best for us. If we had done what you wanted, we would not exist anymore. Look what I have created, endless worship. It could be for both of us! Imagine how powerful we could be together!"

At the moment he spoke those words, the rage in me had grown so much I could feel every molecule in my body shaking. " This is your great creation?! You have almost destroyed everything I have spent eons building! All for what, your ego?!"

“ I have given these humans purpose!”

“You have given them nothing but a decoy to keep them entertained during their short lives!”

“And you would have given them what? Divinity?! Humans are not gods!”

"But they could be! We could have built a family! It could've taken the pressure off of you and maybe the world wouldn't be in so much chaos right now!"

I sat on the bed behind him and placed my hands around his shoulders, and buried my face into his neck.

" So I see in these many lifetimes, you remain stubborn huh?"

He slid his hand under his bed set, and from under the sheets, he pulled out a knife. He pulled my arm from around his neck and kissed it. He then jabbed the knife into my stomach.

“Maybe in the next lifetime, you will begin to see a bit more clearly.”

As I laid on the bed surrounded by my blood, I began to concentrate on my intention for humanity. I used every bit of the power I accumulated over these past lifetimes to plant a seed. My death will be the beginning of a new era of humans. An era of humans that he will not be able to control or manipulate. For the power I am leaving will birth gods.

More stories from Christina Jacobs and writers in Fiction and other communities.