by Hillary 5 months ago in Mystery 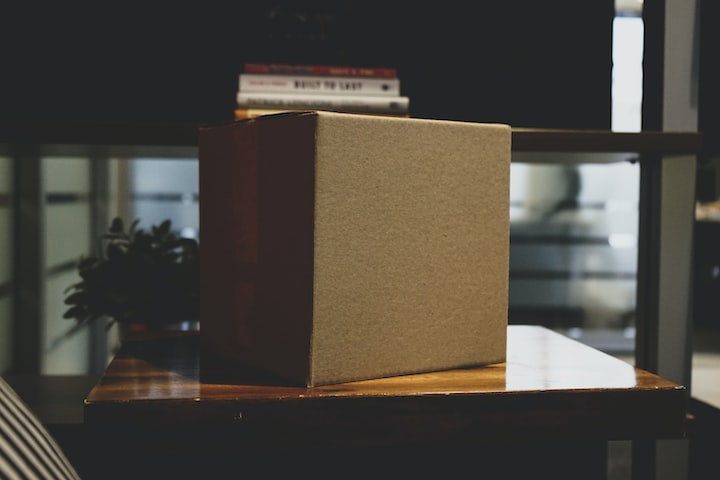 The day started like any other, a cool, crisp day in October. Robert Hainan woke up with his alarm at 8:00 A.M., as usual, brushed his teeth, combed his hair, put on his suit, tie and crisp white shirt. He walked down the hall from his bedroom to the kitchen. He found his usual warm coffee in his coffee maker and fixed it with cream and sugar. Robert grabbed his breakfast from the fridge and mug from the cabinet. He walked out of his apartment at precisely 8:15 A.M.

Robert walked to his card and drove the 10.7 miles to work, parked in his usual spot and walked into his office. He said good morning to the secretary, Ms. Peters, a bright young woman with long brown hair. She was pretty and sweet, but nothing special, just another girl. Robert walked to down the hall to his office. As he opened the door and turned on the lights, then stopped.

This was not normal for Robert Hainan. He found an unusual brown box wrapped on his desk. Robert just stared at it for a moment, not sure what to do. This was wholly peculiar.

Robert decided to turn around, abruptly close the door, and ran down the hall to reception. “Ms. Peters! Ms. Peters!,” Robert yelled almost screamed. This event completely threw off his morning.

“Yes, Mr. Hainan?” Ms. Peters responded. She looked at him with a bored expression.

“Do you know anything about the package on my desk?” Robert pants out his question. He does not workout regularly. It’s difficult to fit it into his schedule.

“A brown small package. It looks like a box.”

“ I don’t know anything about a box, sir.” Robert looks puzzled and exasperated at Ms. Peters. “But, you have a meeting at 9:00 A.M. I’ll ask around about the package.”

“All right, I’ll see you later, Ms. Peters.” Robert walks down the hall to his office the package is still sitting on his desk. He decides to place it on the bookshelf across from his desk.

Robert ‘s phone rings at precisely 9:00 AM. He picks up the receiver, “Good morning, Mr. Sykes. How can I help you today?”

“Come in!” Robert shouts, “Thank you Mr. Sykes, we will take care of that immediately. Talk to you soon…. All right, good bye.”

“Mr. Hainan, I’ve asked everyone in the building including the night janitors. No one knows where this box came from,” Ms. Peters hangs her head after delivering the news disappointed she could not solve the problem.

“Then, what is it doing on my desk?!” Robert stands and throws his hands on the desk scaring Ms. Peters.

“I don’t know, sir. As far as I know, it just appeared. Does it have a name on it?” Ms. Peters picks up the package to inspect it. Finding no name, recipient address, or return address, she says, “Maybe a family member or client dropped it off? Would you like me to call your contact list?”

Robert pondered for a minute, “No, no, you have enough to do today. I’ll send out an email asking about the package and see if anyone fesses up to it.”

“Okay, sir. This is so odd…. I wonder what’s in it,” Ms. Peters picks up the package again.

“I’m not sure. It’s very light.” Ms. Peters hands Mr. Hainan the package and walks out of his office, closing the door behind her.

For the rest of the day, any time Mr. Hainan had a break between meetings or needed to search for something, his eye kept drifting to the box. During lunch he ordered takeout, so he could investigate it.

Robert thought about all the objects that could fit in a 4 in x 6 in x 4 in box. And, yes those are the exact measurement. You never know when a tape measure comes in handy. Robert shook the box and felt something small moving around in it. He thought to himself what if it’s a new pen, or a computer mouse, or a calculator, or a notebook, or candy. What if it’s a bomb?! Robert threw the box down and panicking ducked behind his desk. Nothing happened.

Okay, it’s not a bomb or a clock since there’s no ticking. Robert picks up the box again and hears the ring of the telephone. He almost jumps out of his skin as he picks up the ringing receiver.

“All right, patch them in.” Robert straightens his tie and runs his hands through his hair.

“Okay, we can do this. Hello! Ms. Sprigs, how are you?” Throughout the afternoon, Robert continued to ponder about the identity of the object inside the box and the person who left it on his desk.

So far, none of his contacts knew who left the box or what was in it. By 5:00 P.M., Robert began tidying up his desk and determining if he should open the box. Still no one had claimed it or knew anything about it. Ms. Peters had checked in periodically to inquire about the box, but both came up empty every time.

As Robert held the small box in his hands, he began to wonder should he even open it? This little brown box held so much promise and hope. Robert didn’t dare open it to shatter those possibilities.

So, he gathered his things, turned off the light and walked out of his office. He walked down the hall to reception. “Good night, Ms. Peters.”

As Robert left, Ms. Peters snuck out from behind her desk and went to his office. She found the small box, opened it, and placed the item on his desk. She made sure to keep the gift tag attached and the box next to the gift. As Ms. Peters left his office, she said to herself, “I’ve never seen someone so suspicious of a birthday gift before.”

Receive stories by Hillary in your feed
Hillary
Read next: ESCAPE OF THE GREEN ANTS