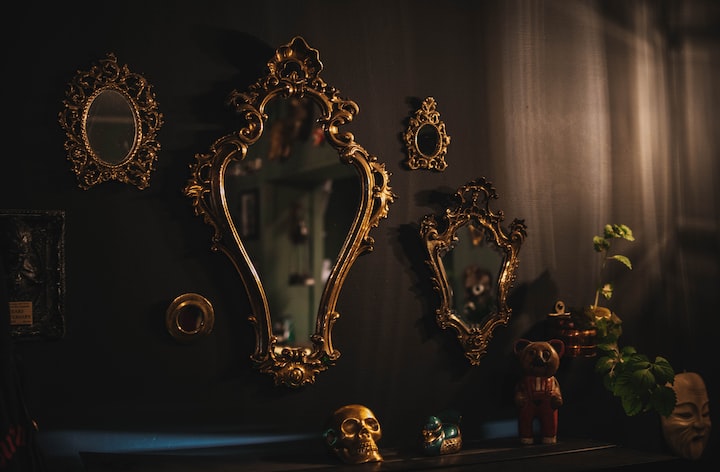 The face in the mirror looked like me, but it was not me. I followed her movements, but I knew that this was not right. She walked away, but I stayed, watching.

And what did the woman see from her side? Did she know that she was looking at someone else?

I checked the mirror every day. She was always there when I was. I mimicked her, so she wouldn’t notice. I doubted she knew the truth.

It was just an old mirror, something from my grandmother. Passed down through the family for generations. Real silver backing. The reflection was a bit hazy and cracked, the silver tarnished, but it still worked well enough. You could still see yourself in it.

Or, in my case, someone who looked like me.

She still didn’t seem to notice that she wasn’t looking at herself.

My grandmother had once told me a story about another world, one just like our own, with someone just like me in it. Everyone I knew was reflected in this world, but everything was just slightly off. This was a world where things were different. Food was plentiful. Our family was happy. No one you loved died.

There was no magic in this world, but it had its own sort of magic to it. It spoke its own sort of language, one I could understand, one that the people of our world could feel in our bones.

It was a separate little universe, locked away, hidden so that no one could hurt it. No one could bring the dangers of our world to it. No one in that universe knew of our universe. No one there ever had to want for anything or worry about the darkness.

Had grandmother been speaking of what she saw in the mirror? Was this the world she’d told me so much about? Was this other version of me the one who felt no pain, no hardship? One who didn’t know the darkness of our world, the venom of infection, the tearing of limbs for those who were not careful?

She looked like me, but she looked whole in a way I was not. My surface was fine, but my innards had been gnawed at for years by the things that creep in at night.

Did this other me not have to worry about such things? Was she as whole on the inside as on the outside?

There was only one way to find out.

One day she checked her reflection and I smiled back instead.

I held my hand against the glass and pushed. I pushed and pushed until it slipped through. My head went next, and I pushed all the way, climbing out of the mirror’s frame. The woman who was not me screamed and screamed.

She was so very loud. I silenced her.

It turned out, her inside was just as intact as the outside. Or at least, it had been.

I looked around the room. It was so very bright. There was no darkness here, I could feel it.

With a grin, I broke the mirror. There was no turning back.