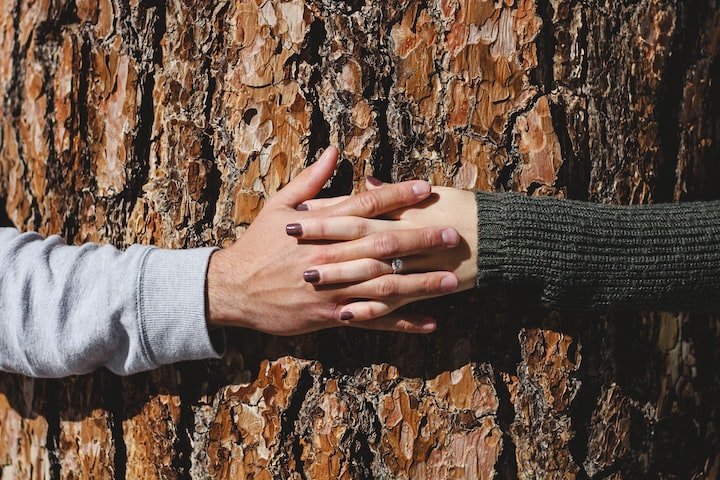 The smell of fresh hay still reminds me of summer. Whenever I drive past a field I roll down my window and take in the scent, longing for those days of my youth. It had been years since I had visited the family farm, where I'd spent my summers when I was a kid. Now it was nothing more than a plot of overgrown land. The barn had long since held fresh hay and reeked of rot and mildew. The bright red color had turned a dark brown in the areas that still had paint. The large door hung off it’s rusted hinges leaving a gaping hole that was sucking me in, inviting me to walk through my faded memories. I wondered if it was waiting for him too.

My life changed forever on the last summer day of my 18th year. It had been a humid night and I snuck out of my Grandmother’s house. It would be the last time I climbed over the white window sill to fall on the soft grass below. He always met me there, at the barn that lied between our farm and his.

“You won’t see stars like this when you go to Los Angeles.” Henry said, as he snaked his arm around my waist. He had propped himself up against the side of the barn while I sat between his legs and leaned against his chest.

“No, I’ll be seeing stars of the Hollywood kind. Hopefully.”

“Why of all things do you want to be an actress?”

“To save lives,” he said, his head tilted to the side as if to say, what’s your point?”

“I’ll save people too. From boredom.”

It was an argument we’d had all summer long. He wanted me to go to college with him but there was nothing for me at the small private college he had gotten a scholarship for. Not that I could have afforded it. Instead of responding he rested his chin on my head and hugged me.

“I want to be someone different. With acting I can be anyone.”

“I love who you are now though. I don’t want you to be different.”

I pulled out of his arms and turned to look at him. “You what?”

“I said I love you Maddie.” His hand grazed my cheek and he pulled me close to him. It wasn’t the first time we kissed but our mouths locked together like it would be the last.

We used our bodies to clumsily say goodbye to each other that night on top of a bale of hay covered in a scratchy blanket. The next morning my mother picked me to take me home and out of his life. He wrote me a few letters. That I read and then packed away in a box on the top shelf of my closet unanswered. I had wanted to stay in touch but sometimes life doesn’t work out the way you expect it to.

Six years later I found myself in the barn again. It seemed smaller than it once had. The hay replaced by the tractor, dusty from being unused for so long. I wondered if my Grandfather knew when he parked it there, that it would be the last time he sat in that hard metal seat. He’d passed away the year before and my Grandmother had just followed him. I’d run out of her house the night of the funeral, unable to handle all the memories of the both everywhere I looked. I didn’t care that I was in my only black suit. Holding my high heels in each hand, my bare feet tore through the damp grass while tears ran down my cheeks. Instinct alone led me to our familiar meeting place. I thought I was dreaming when I saw him standing in the doorway.

“What took you so long?” He said and held out his arms. I ran to them and wrapped myself around him as he lifted me off my feet. “I missed you Maddie.” He whispered in my ear and I loved that he knew not to ask me how I was or to tell me that he was sorry for my loss.

He put me down and I pulled back to examine his face. It was as if age hadn’t touched him save for the scruff of beard he’d grown. “I missed you too.”

Henry watched me for a long time and then held my hands in his. “I wasn’t going to ask but now that you’re here, I have to. Why didn’t you write me back? Or call me? Anything?”

“I went to school too, you know? And got a job, not in acting by the way. And . . . I got married. We wanted different things. I knew it then and you did too even if you wouldn’t face it.” I blurted, unable to think of a way to explain to him without telling him everything.

“Oh,” he said and looked down at my hands once more. He ran his fingers over the skin where my wedding band should be.

“We divorced last year.” I shrugged and pulled from his grasp. Reality had started to rear its ugly head. I knew I shouldn’t be standing there, seeking and taking comfort from him, knowing what I had done.

“If you’re divorced then I can do this.”

Before I could stop him his lips were on mine. I melted into him, this kiss far improved from our first teeth clacking attempts. My subconscious poked at me, imagine all the practice he’s gotten while you’ve been playing at domestication, it said. The thought snapped me to reality and I pushed at his chest, gentle but firm.

“No we can’t. I’m so sorry. I’m sorry for everything. But things can’t just go back to how they were.”

“Why?” Henry said and shoved his hands in his pockets as if to keep them under control. “We’re adults now. We can do whatever we want.”

“Are you in Med school?”

“Yes, but what difference does -”

“I have a daughter. She’s only five and I can’t uproot her life. Take her from her grandmother, her school, everything she knows to take a chance on someone I haven’t seen in years.”

The smile that I had so loved fell and his mouth fell open. “Five. You must have moved on pretty quick after me.”

“No, I get it. Look, I have to get going.” He walked past me, our shoulders brushing, and without looking at me he said, “It was good to see you again.”

Just like that he was out of my life for the second time. He’d only been back in it for a moment but it had been long enough to break my heart. I’d wanted to chase after him, to tell him the truth that had weighed on me every time I looked into my daughter’s eyes. I wanted to beg for forgiveness but my feet stayed rooted in the mud under the threshold of that old barn.

Now here I am once again at that threshold. Of the barn, of light and the darkness of abandoned dreams. Between truth and deceit. Life and decay. I heard his footsteps before I saw him. It was time to face him. I’d called him this time here this time and I saw confusion in his gaze but maybe a little hope too. He didn’t hold his arms out for an embrace this time but instead stood guarded. I clutched my eight year old’s picture in my hand. The one with her hair to her shoulder in a mess of brown curls. When I showed it to him he would see her father’s nose and smile. He’d see a pair of chocolate brown eyes that were almost identical to his own.

I opened my mouth to respond but choked on the words. “This is my daughter.” I shoved the picture into his hand.

“Okay . . .” he said, raising an eyebrow and then looking down at the picture. “She’s beautiful. She looks just like . . .” He almost said that she looked just like me. Most people say that but only out of a sense of obligation. Henry looked up at me and pointed at himself.

Tears were in his eyes when he asked, “What took you so long?”

More stories from Leigh Ann Tuttle and writers in Fiction and other communities.