by AlexisB about a year ago in Fable
Report Story

A Tale to Rock You to Sleep as the Water Laps Under the Hull. 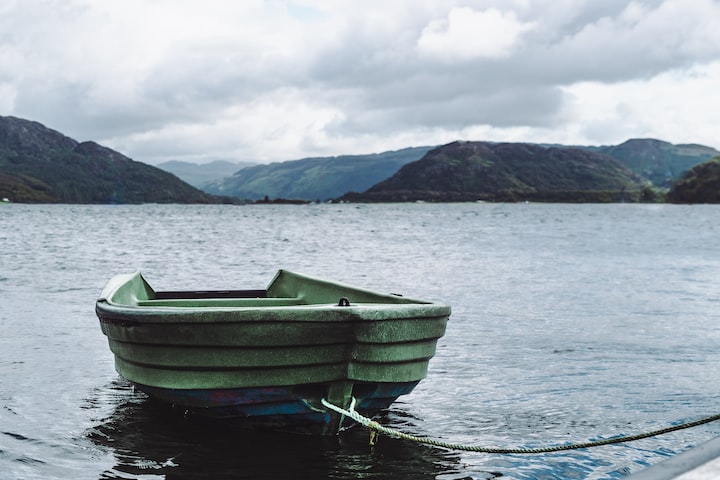 Photo by Dan Smedley on Unsplash

Children like something to lull them to sleep especially if they are somewhere unfamiliar. My late wife and I used to tour around in our motor caravan researching folk customs for our various exhibitions, lectures, books and television programmes. This story, with many adaptations and embellishments often served to calm our three children down after a day that frequently excited and overstimulated them, that’s when they hadn’t to be extra well behaved for a radio, TV or magazine interview.

Now in my seventies this same story has served my grandchildren and my new wife when she has had a particularly stressful day.

The little boat was made of a gold-brown wood, with overlapping clinker planks and lots of ribs which were beautifully varnished. Every Autumn the family would come down for one last row along the estuary, then with great ceremony pull it out of the water, lay out a barbecue on the sandy mud bedside it and have a picnic, before loading it onto a shiny trailer, that never went into the water, to be towed home and put into a brightly lit garage and be sanded down over several weekends before a new coat of varnish was applied very carefully.

This year was different. It was taken out of the water and put on the roof of a strange car and taken somewhere different, where it was put into a boatyard with lots of other boats, some were very big with tall masts that had been laid out along their decks and grey, green, blue or dirty white tarpaulins pulled across them with ropes that crisscrossed under their hulls, propped up by wooden posts or rusty steel legs.

Others were still afloat just off the slipway that ran down the middle of the boatyard and their halliards went tapa tap, tap against their metal masts which often moaned as the northeasterly wind whistled around the boatyard catching up dead seaweed and old newspapers which it rolled against the tall chain-link fence, then chased itself across the glassy water making catspaws or small wavelets that lapped against the floating hulls and wooden piles of the jetty where ropes dipped in and out of the water, festooned with seaweed as the tides went in then out.

The little boat shivered. He had not been covered up.

“You’ll probably be here all year!” moaned an old fibreglass ketch that showed signs of grey through its white gel coat and rubbed down rust red paint below its waterline. He had shifted slightly in his cradle as some of the wood had rotted away while other grey, sawn and weather-beaten props had been pushed against him. A faded and blistered ‘For Sale’ sign flapped against his blunt and chipped bow.

“I’ve been here five years. Sometimes people come down and look at me, then a surveyor might come and tap me round my buttocks and stern, then that’s the last of it. You’ll be doing the same my lad.”

A large Princess Cruiser hung on strops from a moving crane tried to comfort him.

“Don’t be cruel, he has new owners, I’ve seen them before. They went out every week in their rubber dinghy until it was punctured. They look nice.”

And sure enough, a few days later, two young men came and lifted him into the water, and for the first time an outboard motor was clamped to his stern, it felt different, stiff and a little itchy.

The little boat couldn’t understand what they were saying and the noise of the outboard was strange with a funny vibration that buzzed right though the little boat.

After about half an hour the engine stopped and the little boat tried to catch its breath. He had never been so fast. The two men were moving about, getting fishing rods and setting up on either end of the little boat. He was surprised when mackerel and then a sizeable cod flapped down on his planks, they were a bit smelly and scales were everywhere as more fish followed, a flounder, some wrasse and the little boat was wondering what would happen next, when the engine started and he was now pushing sparkling droplets into the air from his bow and a plume of white spray from his stern as he breasted the outgoing tide, went past the boatyard and further upstream until he came to a small muddy creek surrounded by low trees, where he was anchored and the two men got out taking the fish with them.

The little boat felt very happy thinking this was going to be his life, but it wasn’t.

Weeks went by, the tide came in lapping under his planks as he slowly floated up out of the mud and tugged this way and that at his anchor chain as the wind blew and the tide surged then ebbed twice a day.

It grew colder, the rain came and the little boat began to fill with rainwater. At first, he thought the sun would blister his varnish, then his planks would shrink and split, but instead, weed grew over his anchor chain and other weeds attached themselves around the barnacles who had taken up residence under his keel.

The days grew shorter and colder. There were no other boats to talk to and he felt very lonely. Once in a while a seagull would sit on his transom and talk about the countryside and how he found much better feeding inland than he ever could in this little creek.

An oystercatcher was very alarmed the first time the little boat tried to talk to him and flew off, piping with alarm, then came back after a while to entertain him with stories of the dunlins and the trouble they got into. He said the dunlins would only stay in crowds and if one was frightened by anything they would all fly off.

The little boat wished he could see all these things, but all he could see was mud banks at low tide and occasionally on the biggest spring tides see over some reeds and sedges to the tops of trees a short way off.

One day everything changed.

The wind was very cold and it got stronger, with a very sharp edge. The ropes left coiled on his thwarts froze and the rainwater in his bilges turned to ice.

It began to snow then turned to rain as the wind grew ever stronger. The water no longer lapped under his planks but rushed and gurgled. Soon choppy waves nudged his stern and turned him round looking out towards the sea which looked grey and angry.

The oystercatcher said: “Be careful, there’s a storm surge coming. The fulmar told me. He saw ships in trouble.”

The little boat wondered what that could mean. He soon found out. The water turned brown and frothy, foam blew all around him and as the tide came in it was bigger and faster than he’d ever known before.

He nodded up and down frantically, he tugged at his anchor which moved a bit then stuck hard. Something gave way and the rest of his chain went rattling out to splash in the dark waters as night fell. He could feel the anchor rope going out to its full scope before with a big nod and a tug it pulled out a cleat and disappeared overboard.

The little boat spun round then a big swell came under him pushing him further up the creek.

He saw a cutter, its mast making a low moaning noise as its halliards thrashed and battered themselves against it. The mast jerked to and fro as the cutter bucked, buried its bow under the water then rose up throwing a brown cascade aft to fill its cockpit.

“It’s every boat for itself. A yawl’s gone aground near the boatyard and a cutter’s been blown over crushing a speedboat.”

The rest of his words were lost as he surged onward. Then it began to snow, very hard so the little boat could see nothing.

He felt shingle, mud then grass slide under him as the tide rose even higher until with a bang he hit something hard and stony, then another one and was jammed fast.

The snow just came down heavier and heavier, covering him and the wind blew drifts over him as the tide receded. Soon he was completely covered and frozen fast to the ground.

He lay there for days. The snow had stopped then it became very cold. All the water in his bilges had frozen hard and there were icicles hanging under his lee bow.

Sometime later he could hear people talking then they went away again. Over several days this happened and each time the voices came nearer until one morning he could feel two men digging away at the snow with some chattering children around them.

“It’s frozen hard between the gravestones, it’s going to take some moving.”

“Well, Kaz and Stash said we’re welcome to use it for the carol service.”

This meant nothing to the little boat, who had little idea what a carol service was.

The men worked all day and with a lot of help managed to free the little boat and carry it out through the churchyard gate, to put him on a trailer.

He was taken bumping over a rough road and eased into a barn where chickens looked at him in surprise. He was then covered with a tarpaulin.

The little boat wondered if he would ever float on the sea again.

The next day some children came in and pulled off the covers.

“Ooh Daddy can we paint it?”

The next few days were very confusing. People came and went, tinsel was pinned along his gunwales and two statues were put in his stern.

Three days later, he was rolled out one evening, his trailer hitched to a small tractor that was covered in coloured lights and joined a lot of other cars and trailers. One looked very strange with a man in a red suit, who was waving at crowds of people as they drove steadily along through a town with lots of lights overhead.

Finally, they stopped in a big square and some young people gathered around him carrying lanterns.

A loud noise started then everyone started singing.

The little boat didn’t understand any of this, but suddenly felt very important.

Later, back in the barn some men came in and started talking.

“Thank you Kaz and Stash, it was lucky we found your boat washed up in the churchyard.”

One of the men spoke with a funny accent.

“Oh it was our pleasure. Perhaps we can keep the boat in this barn through the winter then really clean him up and revarnish him when the better weather comes.”

There was a laugh.

“Of course you can, as long as we can use him again next Christmas.”

The little boat felt very warm and cosy. This was better than the boatyard.

More stories from AlexisB and writers in Fiction and other communities.