by MATTHEW FLICK 2 months ago in Short Story

Family Secrets Found in a Barn 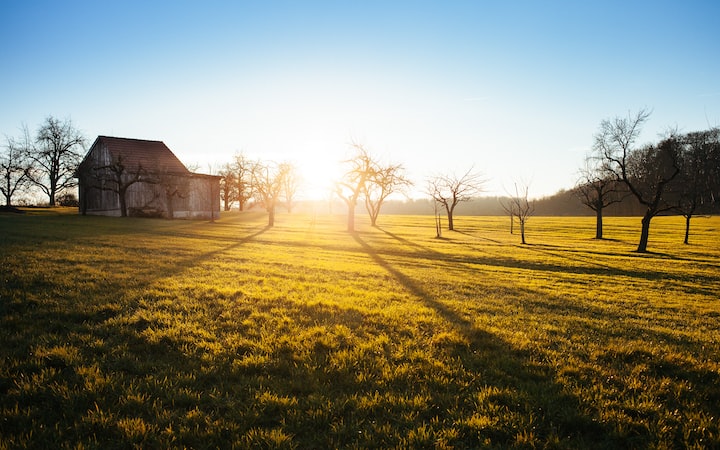 Photo by Philipp Reiner on Unsplash

Gram died, leaving us with eighty-three years of junk to sort through. To her, everything in the old barn wasn’t junk. It was memories. It was life encapsulated in old furniture, books, old toys, and paper. So much paper. I’ll never understand the greatest generation’s obsession with paper.

The faded gray barn sat on a patch of red dirt behind the whitewashed farmhouse. Gram’s dad had built the house and adjoining barn when he arrived from Germany more than a century ago. As a young man, Pop arrived from Koblenz alone. Carrying nothing more than a toolbox and the shirt on his back. Those tools not only built everything on the 26-acre farm but a career for my great-grandad and a simple yet comfortable life for his growing family. The same tools now sat, rusting on a thick oak table that served as his workbench.

We arrived at the sprawling farm with the sunrise. Dad had spent many summers there, especially after his father passed, when he was just a boy. He always told me that the sunrise in the city couldn’t hold a candle to the one in the country. Standing in the driveway in the early morning light, I couldn’t agree more.

The colors were so vibrant. Orange with streaks of red laced the sky like fire. The outer edges an icy bluish cast trying to quench the flames below. Unlike at home, there wasn’t a skyscraper in sight to block our view. It surrounded us in all its midwestern glory.

Sliding back the large barn door, the hinges let out a groan, followed by a high-pitched squeal. Inside, the expansive room was overflowing with dusty boxes and unrecognizable shapes draped in dingy drop cloths.

Dust motes danced in shafts of light coming through chinks in the walls as we went through box after box. We discovered an old shoebox full of utility bills. A robin’s egg blue hatbox overflowed with Christmas cards so faded the holiday greetings were illegible. There was artwork my father had done in the 3rd grade, gold painted macaroni dropping to the floor as I lifted it from the box it had been in for decades.

Half hidden by a rusted engine block from Pop’s ‘42 Ford, a small mahogany box sat in a dusty, forgotten corner of the barn. I immediately recognized it as one of the many trinket boxes Pop had spent hours building in his workshop. Dad had a heavy oak one he was gifted on his thirteenth birthday, decorated with nine baseball players representing each position on the team. I carefully lifted the deep reddish brown box, marveling at the bird and leaf motif he had delicately carved into the lid.

The small brass latch opened with a soft click. Inside the box was a stack of envelopes held together with a delicate, pale green ribbon. Love letters written between my grandparents while Gramps was stationed in Australia during the war. At the bottom of the stack was a smaller envelope, yellowed by age.

Inside the brittle envelope was a delicate ivory colored card emblazoned with two silver bells. Written underneath were the words:

Join Us in Celebrating the Union of

My grandparent’s wedding invitation. Dad stood in a darkened corner of the room, poring over an oversized photo album, a dusty trunk sitting on the dirt floor at his feet.

“Just curious”, I replied as I slipped the invitation into my pocket. Putting the box back into its hiding place. “ Find anything interesting?”

Receive stories by MATTHEW FLICK in your feed
MATTHEW FLICK
Read next: Don't Open the Package