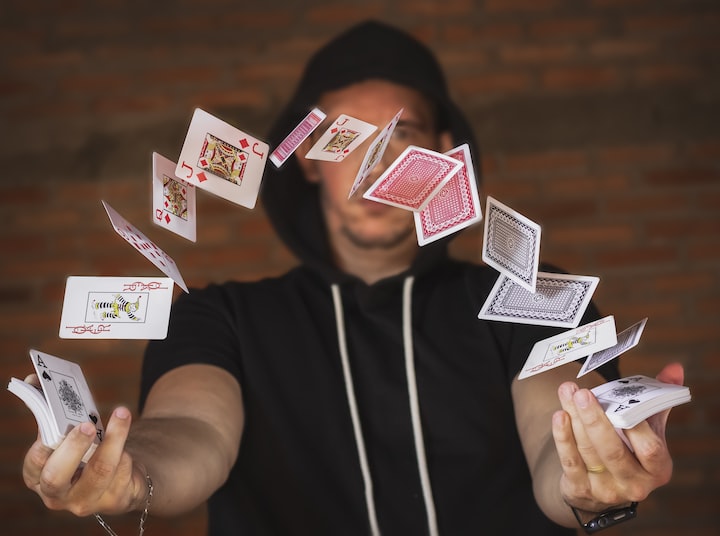 Photo by Edson Junior on Unsplash

The crowd are warming up now, swarming around the makeshift table which Zerdin has cobbled together from a few cardboard boxes. His manner is beguiling; his one-liners sincere, his winks to the ladies surreptitious, yet his hands move with the fluidity of water, operating the table with the speed and precision that a real gentleman wouldn't (shouldn't) have.

Those cunning hands play a game, the oldest of games, one that is found in the ancient hieroglyphs of Egypt. It has been played with cups and balls, walnut shells and peas, steel goblets and leaden balls and, for most of the twentieth century, three playing cards.

But Zerdin is a modern man and so he plays with contemporary materials; aluminium and plastic discs. Two are blank underneath but the third has a queen of hearts in miniature glued to its underside. Only the rules have not changed having been set in stone millennia ago, as with human nature. This will be played for another countless aeons and the same identical punters will still flock to the table, their wallets fatter than their heads, bleating in rapture for the promise of reward.

There is an endless stream of them that break away from the current of tourists that populate Westminster Bridge. They come for snapshots of the iconic clocktower, the Gothic revival architecture of its sister buildings, the chance to gawp at Dickens and Chaucer entombed under the foundations of the Abbey. They pass up the chance to read their works but dig deep to purchase the overpriced mug with their quotations printed on the face.

Zerdin flashes his charlatan's grin to a young woman near the front, remarks how lucky she looks today in her stunning outfit. Another tool in his expansive arsenal, another piece of bait used to lure them in. She barely hesitates to join in and readies herself with a five pound note clutched in a soft, well-manicured hand.

“Keep your eye on the red queen,” he calls out, holding up the marked disc for all to see. He uses this opportunity to spot the hunched figure near the back of the group, hands in pockets, her untamed hair sprouting out from beneath her hood. She cuts a pathetic figure against the bulk of the well-fed mass. Not that they would care enough to glance behind them.

All eyes are on the ruby lady.

Just the way Zerdin wants it.

“Eyes on the prize! 'Heigh-ho', jumping fiddle, is it the side or the middle!” he choruses and the money disc is tossed face down into motion. The machinations of his arms and wrists transform his hands into blurs, the discs thrown above and under each other, landing in seemingly random points on the table's surface. Chance, of course, has no bearing on this game.

The hooded girl begins to edge slowly into the outer circle. Zerdin has operated for so long that he can watch her progress with his peripheral vision during play. She uses her tiny frame to her advantage, weaving unhindered past distracted onlookers.

This is a rite of passage. Choosing a mark is as crucial as the payoff. Active participants are throwing their money away to the operator . The shill picks clean the curious onlookers. A two-pronged attack.

She is drifting towards a man in smart/casual wear. Well groomed, hair slicked back. Her eyes offer up a look towards Zerdin to seek approval. He nods. Good instincts. The girl is a natural. She positions herself behind him. Zerdin is almost finished with his routine.

The finale is the signal to attempt the lift. She can see the bulge of a wallet in the man's inside pocket. His blazer is unbuttoned at the front. Her line of sight to the load is clear and direct. This should be textbook. She flexes her fingers. Zerdin snaps the last disc onto the boxes.

“Place your money, folks. All bets are final.”

The eager woman with the note is the first to bet, choosing the disc centre-right. The line of people behind her surge forward in a wave, stalks of arms grasping pound notes fanatically rushing in. Zerdin casts his attention back at the girl.

Her arm darts into the pocket like a cobra's strike. The man is still watching the rabble. The wallet is in her fingertips. Zerdin returns to the pile of cash. As predicted, the correct disc remains unclaimed, the latter two swamped in sterling. He flips over the duds and they cry out as a group in profanity.

“Unfortunate!” he says and pushes all the notes into a waiting satchel. The lady at the front has lost her enthusiasm, promptly deciding to move on. As others join her, Zerdin gains a clearer view of his protege.

She and the man are no longer visible. Zerdin stomachs his anger.

“No more bets please. I'll be here tomorrow if you want another chance. Thank you,” he advises the crowd. They moan, disgruntled, but nonetheless merge once again with the flow of the pedestrians. Zerdin pockets the essentials, money and discs, pushing towards the girl's last sighting.

He grunts upon arriving.

The man is gone but the girl is sat on the filthy concrete with her knees to her chest. There is no sign of the wallet. Zerdin's arm hoists her up by the scruff. He sees for the first time that her right eye is coal-black. Her nose is busted in two places, the front of her jumper stained crimson.

He releases his grip. The pupil looks up with tearful remorse.

“You see where he went?,” the master barks. She pauses for a moment, then nods silently. Zerdin reaches behind his back, extracting a hidden item. She holds out a hand, palm upwards. He thrusts his present into the waiting paw.

“Go get it back then”, he commands before evaporating into the throng.

In the words of Rod Serling; I never chose to write, I succumbed to it. I wrote my first story when I was nine for a school assignment and have never stopped. If you love the macabre, then consider my work submitted for your approval.

More stories from Liam Cairns and writers in Fiction and other communities.