by Natalie Williford 5 months ago in Short Story 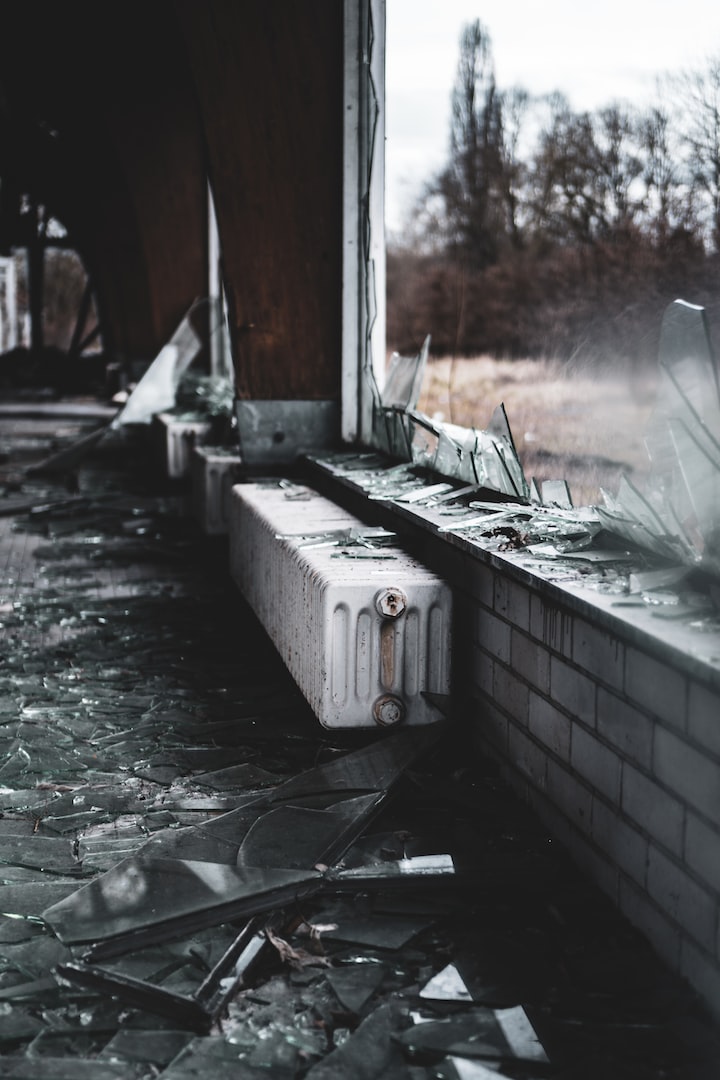 Photo by Justus Menke on Unsplash

Something shiny caught Elora's eye as she leaned forward across the rubble slope. She used her bare toes to try to grip the crumbling concrete as she shifted to look down into the darkness between the wedges of stone and debris. She couldn’t quite tell what it was. It glinted in the sunlight almost like a small silver fish under water as she leaned back to get a better view. Elora frequently crossed this particular rubble pile on her way to the food pit, but usually she crossed with the hoard of children who made their way to and from the pit each day, so she had never paid much mind to the ground she stood on.

Geo came up behind her with his hands full of small stones that he had been throwing at broken windows "What is it?" He said. She turned to him, careful not to slide down, "I don't know". Elora got down on her stomach and wormed towards the dirt at the base of the concrete slabs. She plunged her hand down into the dirt, pulled up a hand full of earth, and then carefully worked her way to a flat spot on the slab. The dirt clump yielded bottle caps, small rocks, glass shards and a small silver object on a chain. Elora fingered through the clumps and grabbed the silver by its string and lifted it to the light. It was shimmering and beautiful, but oddly shaped.

She used her shirt to wipe away the muck while Geo peered over her elbow curiously. Elora smoothed the silver in her hands and flipped it back and forth. The front had some kind of etching that was worn- almost as if someone had rubbed it between thumb and forefinger over and over again. Elora found a clasp and the silver popped open to reveal faded pictures on either side of the interior. One picture showed a man and a woman facing each other and holding hands. They were looking deeply into each other's faces - like they knew something no one else did. Geo's eyes bulged at the photograph- it had been a long time since he had seen anyone touch like that - even in a picture. "Whoa" he said. " David won't like that." Elora ignored him- there was a world of things that the community supervisor, David didn't seem to like and most of those things fascinated and entranced Elora.

The other photograph was a baby, but it was strange. The baby grinned with pink gums at whoever was behind the camera. She wore a pink bow on her hairless head, pink striped bloomers, and a matching pink top. Blocks and fuzzy animals surrounded her. The floor under her was a white sheet that was mounded up behind her to keep her upright for the photograph. Elora stared at the photograph. She had never seen a picture of a child before. No one she knew had ever photographed a child and she was not sure why anyone would. She carefully closed the clasp and gripped the silver tightly. She knew that she had found something that Momma would like- a treasure for Momma to keep.

Momma was different from the other adults. She kept things and told Elora stories about before. Momma told Elora that the Blight had taken so many people that the entire world mourned for years. She told her that after the Blight, America wasn’t America anymore. Momma said that the Blight seemed to prey on every family. Husbands lost wives, mothers lost children and there was not a single family who had not been devastated by the loss of the most treasured people in their lives.

Momma said that things began to fall apart when the Blight spread so quick that they couldn't staff hospitals with doctors or nurses. Soon after that, most forms of travel ceased and food and goods stopped moving between states. Food shortages and panic ensued. Momma said that when the dust settled, people were lost. So a man named Mark Sharias stepped in with what Momma described as a "cultural phenomenon"... whatever that meant.

Sharias lost his 2-year-old daughter to the Blight, and when his wife was overcome with grief, he wanted to find a way to soothe her. Millions of children were orphaned by the Blight, so Sharias went to find a replacement child for his wife. But, when he found an orphaned little girl to adopt, his wife shunned the child saying that it was too painful to adopt a little girl who would likely die of the Blight. Sharias was at a loss for how to help his wife so he decided that they would ignore the child and distance themselves from each other. A life of indifference would protect Sharias and his wife from pain and suffering. If there were no attachments, or relationships then there was no risk of heartbreak later. Sharias' idea eventually became widely known as "The Indifference". This eventually morphed into a society whose sole focus was Generalized Indifference; people could avoid loss and pain if they had nothing and no one.

Buildings crumbled, people stopped working, but Momma said that Indifference was a disease itself. It didn't really solve anything- it just covered up the pain and made people numb and lifeless. The problem was, Indifference spread like wildfire and entrenched itself in a society that was desperate for relief from its own grief and despair. Momma knew better than allot of people about pain. Momma lost Elora's older brother, Morgan and her daddy during the Blight and was alone before Elora was born.

After Daddy and Morgan died, Momma lived alone in the woods where she birthed and raised Elora on her own until the community was formed. Momma didn't treat Elora like the other adults. When they were alone in the shack, Momma hugged and kissed Elora. She brushed her hair and told her stories. Each evening, Momma packed food in a cloth and sent Elora out to sleep in the rubble with the rest of the children. Elora knew it was better this way.

People didn’t hug and kiss or touch and they didn’t keep children in their shacks. Having children around was a known risk. Becoming attached to a child who would likely die of the Blight before the age of 12 was pointless. Attachment in general was pointless. Frivolous. Foolish. There was no point in preserving buildings because eventually, they would crumble. There was no point in keeping items or personal things- they would all waste away. Everything had a shelf life and the only way to avoid the sands of time was to possess, form, do, and create nothing.

The children of the community roamed the broken streets in gangs and hoards and Elora was one of them. They did what they wanted. The children ate from the food pit- a trash heap where the adults of the community threw rotting food away from their shacks. Elora was one of the few children who were named. Most names were simple: Rock, Geo, Abe, and Lu. But none of them had a name like Elora - Momma had named her special.

Elora ran from the rubble pile with Geo on her heels. Geo was one of the lucky ones who had been named by his mother before his father threw him out of the community when he grew old enough to walk. Elora was 7 when she found 18-month-old Geo crying outside of his father's shack five years ago. She had picked him up and carried him out to the parking garage where she and the other children were staying to get out of the rain that night. He had been following her around ever since that day. The only place Geo would not go was into the community. As soon as Geo realized where Elora was going, he trailed off. Elora knew that she would see him back at the parking garage and that it was his turn to find food for them. She was free to go see Momma without having to visit the food pit today.

Momma's hut stood at the far edge of the community. On the outside, it was the same muted shanty as all of the other shacks, but inside was a different story. Inside of the shack there were things that Elora didn't understand: pictures from crumbled magazines, records, cassette tapes, jewelry boxes, dog collars and other items were carefully arranged around the shack. Each of the other shacks in the community was bare with only a mattress, stove and sink, and a table and chair.

Momma kept the shack padlocked from the inside. Elora sprinted across the back of the community and slipped to the front of Momma's shack. She could hear Momma humming softly inside and waited to knock for a moment so that she could absorb the sound of her mother's voice. Elora knocked the secret knock and a single hand reached out, grabbed Elora and pulled her inside before the door snapped shut again. "Damn it Elora I told you not to come here anymore" Momma said. "You know how dangerous it is for me for you to be here." "I know" Elora said. "I'm sorry, but I brought you something." Elora unclenched her hand and revealed the silver.

Momma's eyes softened. She carefully reached for the silver and gently took it from Elora's hand. She held like it was fragile. She turned it in her hand and unclasped the silver to reveal the pictures. Momma looked at the pictures for a long time. Her gaze was distant and she sat quiet. Elora was eager to ask questions, but she knew better than to disturb Momma when she got like this. Momma started to smile weakly and mumbled things Elora did not understand. "Cheap fucking Sears photo-shoot probably.... ugh Jesus those shoulder pads on that dress...." Momma laughed slightly and stifled her smile with her hand.

"So what is it?" Elora asked. Momma came out of her trance and said " its a locket." "A what?" Elora asked. "A locket." Momma said frowning. "Its a place where you keep photographs." "Oh" Elora said. "Why would anyone want to keep a photograph of a child?" Elora asked. Momma's face darkened. "People used to do that." Momma set the locket down on the table and walked to the sink. Elora ventured another question: "well what shape is it? Its a weird shape". Momma snapped her head to look at Elora. Her face looked pained. Momma braced herself forward and leaned over the sink looking down into it blankly. "Its a heart" she said. "The locket is heart-shaped." "Oh" Elora said. " I didn't know what heart-shaped was." Momma continued to look down at the sink and nodded slowly "well, now you do."

Elora nodded and went to take the locket, but Momma suddenly asked softly: "Elora, can you leave it here?" She did not look up, but her voice was softer and sweeter now. Elora was elated- Momma did want the treasure. "Yes, yes of course." Momma turned to Elora and said "Thank you" and gave her a small smile. "Time for you to go though” Momma said. "Yes, I know."

Momma quietly and carefully opened the door and shushed Elora out. She called after her and said "I will see you tomorrow." Elora turned and nodded and then ran for the woods that led outside of the community. Momma snapped the door shut, locked it, and sat down at the table. She fingered the smooth, worn spot on the locket that read "I will love you always" as her eyes welled with tears. She sat for a long while, holding the locket and gently tracing its heart shape with her finger. Then, suddenly she stood, grasped the locket in her hand, dropped it in a cabinet drawer under the sink and walked away.