by Jaqui O'Donohoe 9 months ago in Adventure
Report Story

One step at a time 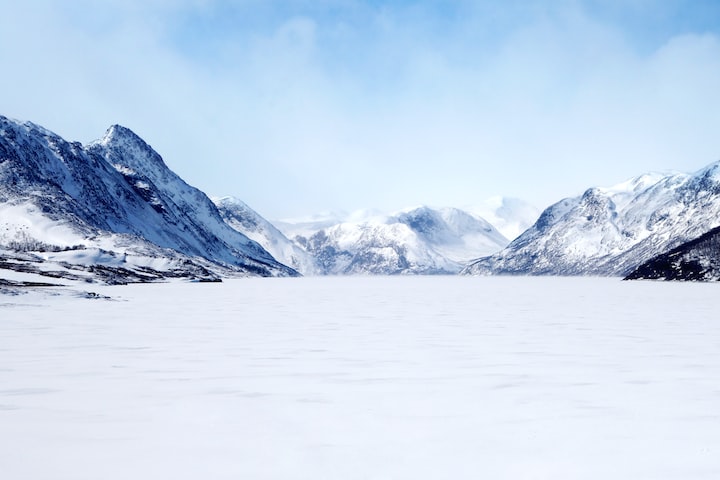 Photo by Francesca Hotchin on Unsplash

Suzy took off her gloves and blew onto her fingers, rubbing her hands together to try and get the blood flowing and keep her hands warm. She grabbed her water bottle and wrapped her microfibre towel around the lid, twisted with all her might and managed to get the lid off. The weather was so cold that the lid often froze on tight, and she struggled with a few attempts to get it open. She took a sip, wincing as the cold water hit her throat. She sighed and looked around at the vast landscape. Snow blanketed everything around her, but the sun was shining, and the mountains loomed around her. Every time she stopped to soak it all in it took her breath away.

“C’mon Banjo” she called to her Alaskan Husky as she put her bottle back inside her coat. She stored the bottle inside her coat to stop the water from freezing solid. She hooked her harness back over her shoulders and smiled as Banjo bounded past her eagerly. He was great company to have with on her epic trek across the ice pulling a sled that weighed about 22kgs with all her supplies. She much preferred the sled however to a backpack, having carried 25kgs in a backpack on her last adventure. She grabbed her poles and started forward, dragging the heavy sled behind her. She was aiming to get to Patterson’s hut before it got dark, and she knew that she would be pushing it to get there on time. She had her head torch in her pocket just in case she needed to put it on for the last stretch and she put her head down and focussed on the snow beneath her. One foot, one snowshoe at a time. “Steady steady’ she said aloud.

After shoeing for 3hrs, Suzy could hear her stomach start to growl in persistence. She knew she had to arrive at the hut soon or stop and eat. She was getting dizzy from low sugar levels and her energy had dropped. The sun was now starting to set on the horizon and the light was beginning to fade. All of a sudden, Banjo gave an excited bark and loped ahead with his tongue hanging from his mouth and his tail wagging. Suzy looked up to see what he was barking and like a mirage in a snowstorm the hut appeared in front of her. It was a small wooden hut, looked very worn and the door looked like it might blow away in a gust of wind, but Suzy thought it was the most beautiful thing she had seen in days. For 3 days now she had been setting up her tent at night and the idea of having a warm hut at night filled her with gratitude. She cautiously pushed open the door, in case of any stray animals, or humans, that might have taken up shelter and was pleased to find the hut empty. A small box held a register book, matches, fire lighters and an old torn novel. She was pleased to see that someone had stacked some dry wood in the corner for her. She dragged her sled inside and started to unpack everything – focussing first on the stove and the coffee. She loved nothing more than a nice cup of hot coffee when she started to set up camp and loved the idea that she didn’t have to set up the tent first tonight.

Within an hour Suzy had dinner cooking, or rather rehydrating, and the fire was roaring. She had stripped off her many layers down to only one layer of thermals, set her bed up by the fire and was reading the novel that had been left behind by a fellow adventurer. She settled into a meal of spaghetti bolognaise, hot chocolate and a good read about a detective in New York city racing against time to stop a bomber. Banjo curled up at her feet asleep, and Suzy smiled a content smile. It had been a hard day, but such a beautiful day.

As the sun broke in the morning Suzy was sitting at the door of her hut, hot coffee in hand and soaking up the solitude and the beauty of her surrounds. A large frozen pond in front of the hut glistened at her as the sun caught the ice and she squinted at the bright light. Banjo came running up to her, smile on his face, and wet from playing in the ice and snow around them. She put her hand on his head, rubbing his ears and he leaned into her lovingly. “We better start getting moving big guy” she told him, getting up and heading inside to pack up the last of her things. “We should get to the shelter today”. She picked up the package carefully, looking long and hard at it. “I hope you are worth it” she said and slipped the small box into the middle of her sled to protect it from damage.

After 8hours of gruelling work, rotating between snow-showing and skiing, clambering over rocky sections of mountain with the sled, and almost losing her footing on a steep downhill path, Suzy sat on her sled to take her bearings. She gave Banjo a treat and munched on a protein bar as she stared at her map. “The shelter should be right here” she groaned to herself out loud, “I don’t understand”. She was reading by the light of her head torch as the sun had long ago disappeared behind the mountain and dropped from the sky. “We might need to set up camp Banjo and look in the morning” she said, concern etched on her face as she knew she had a tight deadline. Banjo barked back at her and kept barking as she felt a rumble underneath her. Terror clutched at her heart, with her first thought being ‘avalanche’, but she quickly ruled that out, knowing she was in a relatively safe open area. The rumbling continued and a hum filled her ears. She jumped up as she noticed the snow below her starting to shift. She grabbed Banjo’s collar as the ground opened up ahead of her and a tall metal column started to rise out of the ground, lights beaming out in every direction.

She stared in disbelief as a door opened and a man stepped out towards her. Holding back Banjo she eyed him with caution until he lifted his ski mask. “Hi Suzy” he called. Breathing a sigh of relief and releasing her grip on Banjo she smiled back at him, “Mike, you scared the whits out of me. I thought it was aliens” She wrapped her arms around Mike and gave him a hug as he laughed. “Is the package safe” he asked. “Sure thing” she replied. It had taken her 5 days of trekking and she was exhausted and looking forward to a few days of rest in the bunker, although she wasn’t sure how much she liked the idea of it being underground. “C’mon” Mike said, “lets get you both some warm food. You have been through a big adventure Suzy. I don’t think you realise how much this package will save humanity. You are a hero and it’s a shame no one will ever know it”

More stories from Jaqui O'Donohoe and writers in Fiction and other communities.