by Abi Alexander 4 months ago in Fantasy
Report Story 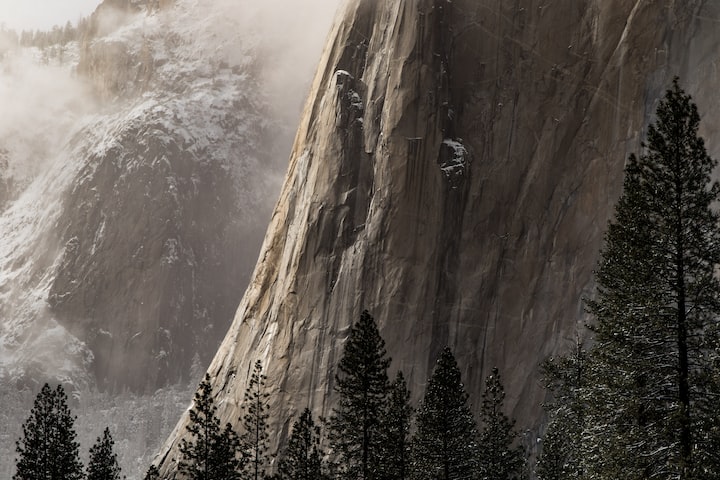 There weren’t always dragons in the valley. Not that anyone remembered a time before them anymore. Except, perhaps, old Reya who was as ancient as the deep valley hillside she lived in. However, since she’d caught Goblin fever four summers before, her stories had become jumbled with tales of life in the valley before The Collision and merged with tales the fairyfolk shared of life beyond The Scar. So a life of dragons, was all we knew and except for the occasional stolen livestock, they were far less troublesome than many of the other creatures who had followed in those early days after The Scar appeared.

Rock trolls were notorious for laying claim to the potato patches; the tilled earth, after the seeds had started to grow roots, were perfect for them to make their nests.

Satyrs could often be found stealing the potatoes right before harvest time to use as burnt offerings in their sacred summer ritual.

Before I’d seen my sixth year, I’d seen more fights break out between the fairyfolk and humans over the humble potato than seemed reasonable.

Stories trickled down through the ages of the wars that had raged when The Scar first appeared in the valley but almost one hundred years later, the idea of a human-only world was laughable to any who lived here.

An irritated cough bought my attention back to the present and out of my daydreams about history and the enormous azure-coloured dragon I had been watching soar across the great mountains that stood on either side of the valley.

“Oh I’m sorry Mags, I was away with the dragons” I smiled sheepishly.

My relationship with the best (and notoriously grumpiest) merchant in the lower valley was strained at the best of times.

She sniffed and her tongue rolled over her razor sharp canines. Not a good sign.

“‘Well, what you standing there for? What you got to sell?” she barked

I fumbled hastily within my well-worn leather backpack and very carefully placed two large purple speckled eggs on the wooden counter that separated us.

I saw her eyes light up greedily, which she quickly covered with a scowl when she thought I had noticed.

“Griffin eggs” I said loud enough so that those behind me in the line could hear and with the hope that Mags would not undersell me by too much. Everyone knew how rare Griffin eggs were let alone ones of this size.

“Did you steal them?” she challenged.

Everything I’d ever traded with Mags had been stolen. She knew that. The same could be said of half the creatures waiting to trade; without it there was no trade.

Then it hit me, she thought I’d stolen from another trader; that I did not have the skill to precure something of this value myself. Yet another creature who seemed determined to underestimate me in this valley.

“I got them myself.”

My indignation escaping me before I could temper it down. I pushed up my sleeves to show my bruised and scraped arms.

“I do know how to climb. It’s not only fairyfolk who know how to do these things. As much as you like to ignore it, I’m actually pretty good at this.”

It was true. No other trader had bought Griffin eggs to the market the past year and yet, I was the only one amongst both the human and fairyfolk traders who was met with such open hostility from merchants and traders alike. Yet another thing to thank my family for.

She rolled her eyes as if I was nothing more than an inconvenience.

“I’ll give you five eruials for them.”

My mouth fell open in shock.

They were worth at least double that.

“Come on, we’ve all got places to be”, a voice behind me called and I could see from the hard-set line of the miserly Orc’s jaw that she was not going to change her mind. It was five eruials or I might find the eggs going mysteriously missing on my way home. I knew how things worked well enough around here.

“Fine” I said sullenly taking the five-sided coins and kicking the counter for good measure as I left causing the eggs to wobble dangerously.

The list of things that we needed from the market poked at my consciousness; prodding me, encouraging me to do the right thing; the sensible thing for once. I ignored it and, instead stomped off in the direction of the ruined grove.

I might not be able to change who I was or where I came from but this would be the last time Mags undersold me or underestimated my abilities. I was going to make sure of that.

A melodic voice broke through my determined walk. Pretending I hadn’t heard it, I continued walking.

I sighed resignedly and stopped in my tracks. A satyr with chestnut-coloured legs, a chipped horn and a goofy smile appeared at my side.

“I knew you could hear me! I haven’t seen you around for days. Where are you off to my fine hunter.”

A low chuckle came from his chest.

“Just by the look on your face, I’d say you’re up to something my mother would disapprove of?”

I turned towards him.

“Your mother disapproves of everything.” I pointed out to my best friend.

“Good point. Come on, out with it. Who ruffled your fur?”

He looked me up and down, noting the distinct lack of fur.

“I’m just so sick of not being taken seriously. Of being punished for where I come from. I’m a good trader Tay. One of the best and I’m always being made to feel like a child and I’ve had enough. I’m going to get them something that no-one can argue with. Something that means they will finally take me seriously.”

Taylin’s eyes travelled further down the path and realisation dawned on him.

“You’re going to The Scar aren’t you?”

I steeled myself for the inevitable protestations of how I couldn’t break the valley laws like that or put myself at risk.

“Ok, well I’m coming too - and don’t bother telling me not to or I’ll go straight to Council and tell them what you are doing.”

There was a steely glint in his eye that said he was not joking.

I thought after a decade long friendship, Taylin had run out of ways to surprise me, but it seemed he knew me better than I knew him after all.

“Well, if anything happens to you, it’s your burnt pyre. I don’t need that on my conscience” I shrugged.

It took awhile to leave behind the familiar luscious trees of the grove but their end marked the cessation of what had been endless bird chatter. I had spent a childhood amongst these trees, climbing them, exploring every nook, practicing my aim on the delicious bounties that hung from their branches. They felt as much a home to me, if not more so than the four walls I spent my nights in.

The contrast between where the grove ended and evidence of The Collision began, was stark. Gone were the ancient oaks, the giant firs and in its place? Nothing. Well, not nothing but rather a lack of anything. No plants, no animals, no life. Just an expanse of grey rock.

Here we were. At the place where The Collision had happened all those years before. The Scar.

I’d never seen it up close before. Few had. Even as a mischievous youth, I had known to keep my exploration to the grove.

It was a deep jagged line of obsidian that cut across the floor of the valley up into the mountain reaches. There was barely enough room now for a mouse to squeeze through the gap left in the rock but this close, the air smelt different. A sweet smell. It would have been pleasant if it did not make me think of fruit rotting in the heat of a summer’s day.

I understood now why Council didn’t want us coming near it. Whether human or fairyfolk, this place was charged with energy and it wasn’t welcoming. The gap between worlds had closed shortly after the collision and we were standing before all that was left.

I had thought there might be some creatures living here even rarer than the Griffins that I could poach from but, aside from the two of us, there was no evidence that any living thing had been near here in years.

Defeat threatened to rear its ugly head, so I started desperately looking around on the floor for anything of note. Anything that could prove I had been here, to a place where even the bravest did not dare venture.

I would never be able to prove myself to any of them; never leave my name and the weight that came with it behind me. A legacy I had not even earned.

Frustration ripped through me and I flung the stones down into The Scar.

With a blinding emerald flash, The Scar began to pulse with light. My hand flew up to my eyes to shield them from its intensity; the ground began to tremble. A small tremor at first followed by a violent shaking of the ground that felt like it came from the core of the earth. Rocks of all sizes began to hurtle down the hillside smashing into each other as they went.

I grabbed Taylin roughly and ran back to the edge of The Scar and pulled him down behind a solid boulder just as one flew through the air where his head had been just seconds before.

Then all was quiet.

The contrast was jarring. There was something wrong in that stillness. I cautiously stood up to look around and my body froze. I barely registered Taylin’s urgent tugging on my arm from where he remained in his crouched position. I pulled my arm free, rubbing my eyes, wondering if some dirt had gotten in during the rockslide and tainted my vision… but no, there was no doubting what I was seeing in front of me. Impossible as I knew it to be.

The Scar was open wide.

More stories from Abi Alexander and writers in Fiction and other communities.