The golden flower of death

by Sam 10 months ago in Fantasy
Report Story

Día de los Muertos, November 2ⁿᵈ 2021: a little girl by the name of Sara lays a marigold on her grandmother's grave. Holding her hands together, she closes her eyes and dedicates a prayer for her spirit. Soon, soft arms surround her in a familiar hug. Thus filled with love and innocence was this first act of the new era, the era of the undead. 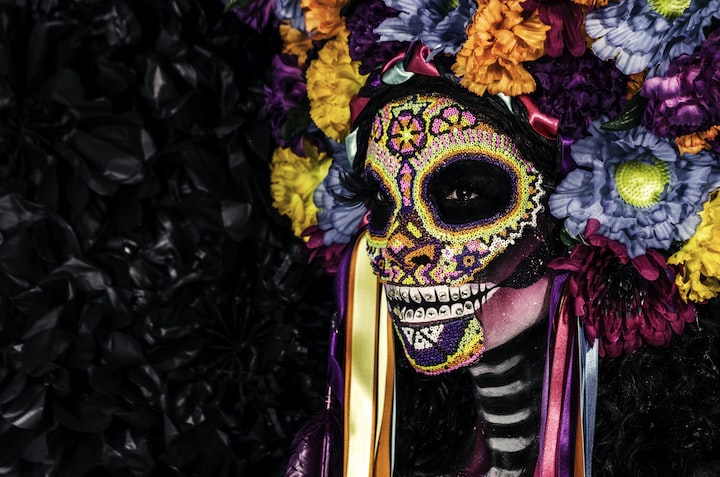 Photo by fer gomez on Unsplash

"Are you still sure you want to do this? It's not too late to stop." Sara asked one last time, hoping to hear a different answer.

"I'm sure." Miss Johnson answered once again, voice as firm as a rock.

It was reassuring to hear the resolution in her tone, yet a quick side glance was all it took to betray the uncertainty that was lying underneath.

She was clutching with both hands at her small purse, so hard that her chuckles had turned bone white. Their brightness in contrast with the darkness of the night sky and her black dress was painfully sharp.

Sara sighed as she noticed that pale detail.

Both she and Jacob had made sure the young woman knew the risks of awakening her dead father, the level of decomposition he would have reached given the life he had lived.

The dead come back in the true form of their spirit. When the spirit is pure, the undead appear in their best living shape - like her grandma did. When Sara saw her that first and last time, the old woman looked just like the radiant girl from the pictures of her youth. Beautiful and warm. When the spirit is guilty and evil though, the appearance is rotten.

And Miss Johnson's father had lived a bad life. A relentlessly violent and abusive man to his wife and only daughter, an addict who had eventually died in a drink-drive accident that took the life of two innocents.

Sara could not even imagine how putrescent his undead aspect would be. They warned the young lady in all possible ways, showed her vivid images and told her painful stories of unhappy reunions.

The client was determined, fearless in her decision and deaf to any afterthought.

Sara could only respect her will and hope - she really hoped - that it would not become a decision the young lady will regret.

With this little reassurance, in the silver moonlight, Sara thus proceeded with the ritual.

She opened the little black box and carefully picked up the golden marigold flower it was guarding. She had held the flower uncountable times, yet its mystical beauty never ceased to impress her. She always took a moment to sink in this light feeling of humble reverence.

With a few sure steps, Sara then positioned herself on the grave right in front of the tombstone and gently bent over to lay the flower on the ground.

With a striking change of pace, she swiftly stepped back a few times, making sure she'd be safe for what was about to happen.

Second after second passed by filled with nothing but silence and stillness.

In her turmoil, Miss Johnson was just beginning to doubt with tacit relief that anything was going to happen at all.

She did not know yet that dark spirits took longer to find their way to the living and had a crushing way back into the night.

Suddenly, a low growl cropped up from the earth giving Miss Johnson a little jumpscare.

The ground started to violently shake, grovel and soil bubbling like boiling water. The bones of a hand and then an arm emerged from underneath this mumbling surface.

Soon, the undead stood tall on the disrupted remains of his grave.

The sight was all that Sara feared.

Worms of various size and colour swarming through the decomposed mouth and other uncountable holes in the exposed bones, empty orbits filled with darkness, flaps of skin feebly clinging to the mouldy skeleton.

It was too much for Miss Johnson. A torn scream of terror left her lips, while the dead man stood motionless. As the last air left the young woman's lungs, she kept shaking like a leaf in the wind, eyes as wide as an owl's.

Sara gave a glance at Jacob to her left, she hated to be right. From the expression on his face, she could tell he felt the exact same way. He gave her an imperceptible nod of encouragement.

On cue, Sara slowly approached her client and put a firm hand on her shoulder. "Miss Johnson, take a deep breath. He can't hurt you. Remember why we are here." She made sure to use her most reassuring voice and relaxed the hold of her hand on the lady's shoulder into a caress. "Do you want to ask your question? This is your only chance."

Most people thought coming eye to eye with the macabre appearance of the undead was the scariest part. It was not. This moment was.

People only ever had two reasons to unsettle the dead's rest and revive them, even if just for a few minutes. To ask for forgiveness or to ask a question. But the dead don't lie. And it is up to the living to survive with the eternal truth.

In this moment of abyss, Miss Johnson swallowed so hard that Sara thought the sound would reverberate far distant forever in the night. She was gathering the courage to speak, Sara could tell. The little lady was a badass.

"Dad, it's me - Lily. I am here to ask you just one question." Miss Johnson spoke with the trembling, sweet voice of a lost child. "Why did you abuse me and mom?"

The undead laughed of a grim and cluttering laughter, and without hesitation spoke the truth. "I did it because I could, and I wanted to. You were both there to please me, and I made sure you did."

"No other reason?" Miss Johnson tried once again, in a last carefull attempt for redemption.

"I liked it, to see the power and control I held on you. How weak you were, and how strong I was. That's all."

Miss Johnson stood up a little higher, tears flowing from her eyes. In a soft breath, she asked a final question, the same one everyone thought would bring them closure. "Do you regret it?"

"No, I don't." The undead concluded emotionless.

Lily had hoped all her life for something more, now she had to face the only truth. She only had herself.

Sara clenched her fist, as she sensed the broken pain of the young lady boiling her own blood. She left Miss Johnson's side and with quick steps went past the undead to recover the marigold flower. It was already whithering, time was almost up. She didn't want to wait though.

Sara looked straight at the sad lady's eyes, asking for permission. The lady could only gather the energy for a small nod.

With the lighter she always kept in the right pocket of her black leather jacket, Sara set the flower aflame and let it glide from her hand to the ground. The flower was the vessel between worlds, the spirit could not stay without it.

Fingers, wrists and arms of the undead started collapsing with crushing strength on themselves with each petal of the marigold turning to ash and smoke. The undead was screaming in excruciating pain as he kneeled to the ground while his bones kept cracking and folding, until it all crumbled to the ground and finally turned into dust. They don't go gently in the night.

Sara walked back to Miss Johnson and took her shivering body in a warm hug.

"Come with me. Let me make you a tea, we have a boiler in the van." Sara said to the sad soul, leading her gently away. As she left the grave behind, she gave a glance to Jacob who, ready with a shovel, was about to close the hole once and for all.

Sometimes it's a blessing, Sara thought, that the dead can only be awakened once. Sometimes they just deserve to be dead.

After making sure Miss Johnson had gotten back safely to her home, Jacob insisted to give Sara a lift. She didn't need one, though. She needed to walk and clear her head. There were good days and bad days in her job as an awakener. That night had been a particularly bad one.

Even with all this darkness and growing bitterness, she knew she could not stop. Like everybody else, she didn't know why the undead could be brought back with the marigolds, and why it happened now. What meaning that gave to human life. Why she, and only a few more, had the power to do so. Maybe it didn't matter. This ability could be used for good or for bad and, with so many people doing bad, it was her duty to do some good. That she knew.

And so she walked and walked her lonely path in the night, each step leading her a bit further from the events of the night.

Dawn was just beginning to lay a blanket of golden rays on the empty streets of San Francisco when Sara reached home.

Time for the living, she thought with a sad smile.

A believer in the mystery that words can inspire.

More stories from Sam and writers in Fiction and other communities.