by Catherine Guillotte 6 months ago in Fantasy
Report Story

A Collaboration with Katie F. 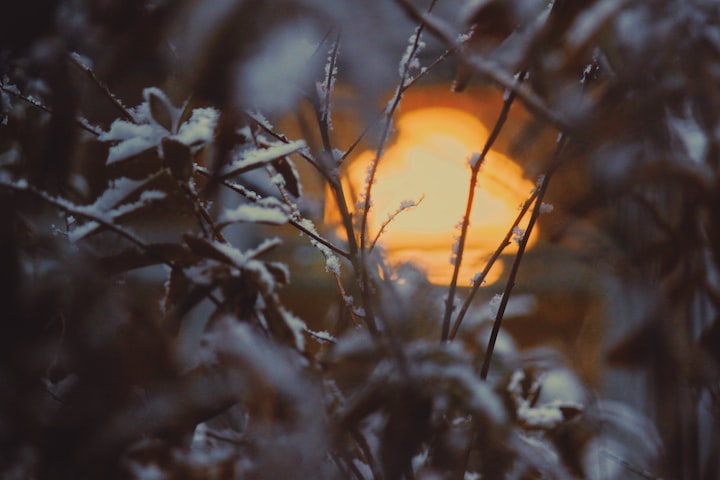 Photo by Sidorova Alice on Unsplash

Not exactly what you want to hear on top of a mountain. Silence is the eerie sound of death fast approaching. I felt Samson shivering with fear beside me as we heard intruders come through the mountain pass.

“Samson,” I spoke quietly, “Sound the alarm.” Samson raised his grey head back and howled, startling a barn owl nearby in a flurry of feathers and angry hoos. Sparing a glance towards my love as we departed, I wondered what my life would be without him by my side. He was the perfect mate: sweet, kind and brave, the type of man any female would be lucky to have. It was even more shocking that he dared to be with a fox hybrid like myself instead of a pureblood lycan. I was lucky, perhaps too lucky, I thought as we arrived at our pack’s dwelling.

My skull rattled, my mind filling with angry growls and curses as the pack panicked, before our Alpha’s voice overpowered the other noise, demanding we meet in the war room.

Taking a breath, I adjusted my course, running through the dark corridors to joint he others. The dread on their faces made my heart sink. They didn’t think we were going to win the fight.

I looked over to Samson then, his long ears pulling back as he saw the despaired expressions of our pack, and Alpha.

I turned as I heard Alpha Stone say my name.

“We will lose this fight… but it will not be in vain.”

It was a struggle to contain my emotions. Being a fox-wolf hybrid, my telepathic link to the pack was weaker, but my face displayed all my emotions for everyone to see. By our Alpha’s tone, I figured it was the Blood Lust Pack that was attacking. They earned that name for a reason, and their Alpha, Leo, was the worst of all.

“Samson,” Stone turned towards my mate then, “You will lead the charge… Sarah, I need you to protect Katy.”

My gaze darted between Samson and Stone. I knew we were the best warriors, but the thought of being separated did not sit well with me.

Turning back to Stone, I nodded solemnly, accepting this task from our Alpha. Samson would lead the charge, but I had to protect the future of the pack.

We didn’t have long to get suited up for battle, but we managed. Even with the threat of total annihilation of our pack looming overhead, Samson still looked great in armor. His beautiful grey sable fur was visible beneath the mix of metallic plate and leather armor.

Meeting my gaze, my mate approached me and we put our heads together gently.

“Our love is strong,” Samson whispered to me.

“Strong as the mother goddess,” I agreed, blinking back the tears that formed in my eyes.

“May she bless us to return to each other.”

“Even after death,” I finished the blessing on a bleak, yet realistic note. Our eyes met once more and I shook my head. This was it. This was the end.

With those last few words between us, I turned away from Samson and went to find Katy, the Alpha’s daughter. The pack must live on.

As I found Katy, huddled down in a corner and waiting for guidance, I heard the first howl. The invaders had reached our home. There was little time to lose.

“Come on,” I told Katy, holding out my hand for her. We needed to reach the bunker. We would be safe there.

As we reached the bunker, the sound of fighting was louder than an avalanche. Wolves howling in pain and snarling in rage. My ears rang from the sound of approaching death even as the thundering echo in my skull lessened with each member of my pack that fell.

All too soon and I only heard three wolves’ voices left: Katy, Samson and the beta Lucas. The battle fell quiet and a small quiver of hope filled my heart. Had they won? Had the attackers been repelled?

“Samson,” I breathed quietly, wondering if by some miracle of the Moon Goddess had the attack been thwarted?

I gasped as I felt my mate’s pain, heard his last dying thought before the voices in my head quieted down. Without the Alpha there to connect the pack, and my mate to connect me to them, I lost the pack entirely.

Even with Katy quivering beside me, I could not hear her wolf’s voice, only the labored breaths and racing heartbeat produced by terror.

Footsteps outside the bunker door made me look ahead. Who was that? I had no mental link to judge if it was friend or foe.

My head snapped up as I heard Lucas, one of our betas, open the bunker door.

“Of course. Katy is well too. What happened? I felt…” I trailed off, not wanting to speak the words aloud. I knew I shouldn’t fixate, but all I could hear was Samson’s dying thoughts of pain and anger.

“I know, it’s alright though.”

“The Blood Lust have retreated?”

“Quite the contrary,” As Lucas spoke, the bunker door was slammed open, the attacking lycans filling the doorway like a ravenous horde.

My eyes widened as I snarled, shifting into my true self. Sleek and beautiful, my hackles raised as I stood my ground against the Blood Lust Pack. As a hybrid, I was far more slender and lithely built compared to the lycans. My white fur stood out against the black and grey hulking beasts in front of me.

“Run,” I growled the word through bared fangs. I could hear Katy’s hurried footsteps as the young pup took off. The invading Alpha’s head snapped up, his gaze fixated upon the young girl.

My gaze fixated upon Lucas.

I needed to protect Katy, but first, I needed to kill that greedy, power hungry rat.

Charging forward, I surprised the invading lycans. Clearly they thought I would give up without a fight.

Blood and fur flew through the air as if a hurricane had been unleashed, howls of pain echoing like the winds of winters. The traitor fell and I wounded many more, but I was no match for the Alpha.

With my dying breath, I cursed the Blood Lust pack, praying to the Moon Goddess for revenge. Blood trickled from grievous wounds, my blood cooling as the world went black.

The darkness seemed eternal, before it was replacing by a shining silver light.

I snarled, recoiling from the unexpected shine.

I froze, hearing an unfamiliar, yet soothing feminine voice that reminded me of home… and peace.

Blinking, my eyes adjusted to the light and I saw a beautiful woman standing before me, bathed in silver light like a star fallen straight from the heavens.

“I know your heart is heavy with loss, you feel you have lost everything, but do not despair. You are alive for a reason.” The woman continued to speak, and I felt a warmth spread through my body. “Take this second chance and light a new path.” She smiled gently, before adding, “You have never disgraced me, my fox.”

Even after the light glimmered and faded, the unknown figure disappearing with it, I stayed where I was, trying to process what just happened.

Looking around, I saw only the mangled corpse of the traitor and bloody prints where the rest of the Blood Lust pack had wandered along with a set of tiny prints. Katy.

Baring my teeth, I trudged outside the banker.

The night was cool, the mountains illuminated with silver light.

Tilting my head slightly, I realized I did know that light, and that woman from before. I looked up, my gaze falling upon the full moon shining bright overhead. It felt like all of her light was aimed down directly upon me in a silver beam.

“Thank you, Moon Goddess.” I smiled briefly, before looking around. I had to find Katy, but first, I needed to take care of my pack. They took Katy alive, that meant they needed her. I had time, not much, but some.

Taking a breath, I steeled myself for the grisly sight to come as I made my way to the front of our territory. I owed them this much, this bit of time and effort for a proper burial.