by Leigh Ann Tuttle 2 months ago in Mystery
Report Story 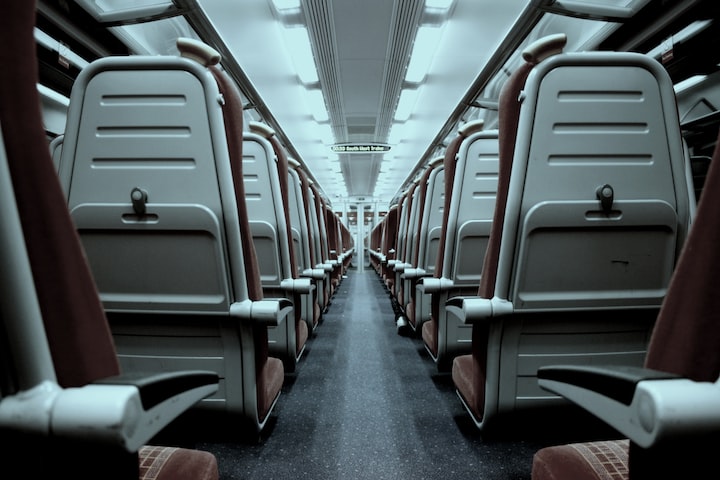 Photo by Andrew Scofield on Unsplash

Gabby woke with a crick in her neck and it didn’t take long to figure out why. Her head was resting on the cool glass of a window and her neck was almost folded to her shoulder. She straightened it slowly with a groan.

“Sorry, I fell asleep. Where are we?” She turned and asked her boyfriend only to find the seat empty.

“Aiden?” She called and rubbed her eyes. It took a moment to click that she wasn’t in her boyfriend’s mustang. The seat next to her was a faded blue with that neon yellow pattern that reminded her of the 80’s carpet in a skating rink. Bright fluorescent lights skipped along the ceiling that lit the rows of seats in front of her. She stood and almost fell back again. The floor was shaking under her. Startled, she jerked her aching neck back towards the window and looked outside.

“Oh my god.” There was a heavy fog outside the window but even through the haze she could see a landscape speeding by. “Aiden! We’re on a damn train!” She looked around but was greeted with silence. The train car, that she just realized she was on, was completely empty.

“Okay Gabby. Don’t lose your shit.” Talking to yourself didn’t count as losing your shit when you woke up on a train to nowhere, that you didn’t remember boarding. “Take stock.” Something her dad had taught her when she was little. When you're in a crisis, breathe and take stock.

Tying her long hair back with a hair tie from her wrist she scanned her surroundings and found that she was in the end car. There was no door behind her and only a metal wall with a motivational poster that said “Hang in there!” and a picture of a cat dangling from a tree limb. “Okay. Possibility one. Time travel, cause that poster is old as hell.” She darted to the front of the train and pulled on the door. A damp rush of air blew past her and she could see the door to the next car. There was a gap she’d have to jump over and the ground moving terrifyingly fast beneath it, but she could do it. It was better than staying here and she had to find Aiden. With a deep breath she leapt across the gap and landed in front of the door pushing it open and falling inside.

This train car was similar to the one before with the same ugly fabric on the seats and fluorescent lighting buzzing overhead. “Aiden!” She shouted even though she could see that there was no one to hear her. She repeated this process three times before collapsing on the floor of yet another identical car.

“AARRGGHH DAMMIT! Where are all the people on this thing?” She looked out the windows again and saw the same murky generic background speeding past. Her frustration rose when she looked back and instead of seeing the door she came through she found a solid wall, with the same lame motivational cat poster from before. How had she not moved at all? “Possibility 2. Dreaming. That’s gotta be it right?” She pinched herself hard all over her arms and thighs. Each one stung as tears burned at her eyes. “Okay. Not dreaming. Take stock.” Gabby tried all the windows but they seemed to have no seam at all and just blended perfectly with the glossy metal walls. Looking for something to throw and once again finding this new hell she was in to be lacking in absolutely anything useful, she threw her fist into the glass with a scream. To her shock it bounced back and she watched as the window shimmer with rainbow colored ripples before it returned to its original shape. “What the fresh hell?” She touched the window and it felt firm so she punched it again only for it to ripple out of control before settling back into shape. She ran to the back wall and punched the cat poster right in its face. “THAT FRIGGIN HURT!” She screamed, shaking her throbbing hand and then cradling it against her chest.

Hang in there! The poster taunted her. “Hang onto this!” She ripped the poster, balled it up and threw it on the ground stomping on it until she was out of breath. When she looked up the poster was there again. Time after time she ripped the poster off the wall only to find another one under it and when she looked towards the ground the torn shreds were gone. Like everything had been reset. “Possibility 3. Stuck in a video game? A really lame obnoxious video game? Hey! If this is a video game and you don’t get me out of here I’m going to sue you for every bloody thing you own!”

“Take stock!” She shouted at herself and smacked her cheeks. “Focus!” She examined the car again and this time she noticed an emergency hatch on the ceiling with a retractable ladder next to it. “Okay let’s see what this does.” Shaking, she climbed on the closest chair, and tested her weight on the arm rest before balancing her body on it and once again making a leap of faith. Failing, she fell straight to the floor landing on her bottom. It took three tries and a very bruised back side before she finally grasped the ladder and hung on long enough for it to pull down. Rushing to the top she had to use her shoulder and all her strength to shove the hatch open. When she tried to lift her body out the fierce torrent of air shoved her backwards nearly knocking her off the ladder. Closing her eyes to shield them from the biting wind she forced herself onto the top of the train. As soon as her knees hit the cold metal roof the wind died completely and she opened her eyes to find herself back inside the train car. She jerked her head around and saw the damn cat poster, its slitted eyes staring back at her, and she screamed.

A pixelated figure started to form in front of her and she threw herself backwards crawling till she reached one of the benches and hid behind it. Square by square the figure turned into the blurry shape of a man and then as if the buffering process was complete his image became crystal clear. He was unnaturally handsome with perfectly symmetrical features and blue eyes so bright they had to be digital. A faint glow came from behind them like the backlight of a tv screen.

“Welcome to the support desk. You requested help. My name is Voss. How can I assist you?” It said with a clear and deep voice.

“What the hell are you?”

Voss blinked a couple of times and said, “My name is Voss. You requested help. How may I assist you?”

Gabby stared at the man, her mouth opening and closing but no words came out.

“If assistance is no longer needed, I will return. Thank you for using -”.

“How may I assist you?” he repeated.

“Would you like to use a hint? The user will receive three complimentary hints. Any additional items will need to be purchased through the main menu.”

She rolled her eyes. This was more annoying than the cat poster. “Sure, why not.”

He blinked several times before speaking. “Question found that best matches your inquiry. Question: What is the escape train? Answer: The escape train is a demo virtual reality game in its beta release. Developed by Gabriele Mills. Graphics by Aiden Harlow.” Voss continued the list of credits while the new information began to sink in.

“Wait, possibility 3 was right? I was really banking on time travel at least that might have been useful. Hold up, Gabrielle Mills. That’s my name. I did this shit to myself?” She said to an unphased Voss who waited for his next command. “That does sound like something I would do. I’m such an idiot. Stupid, stupid, stupid. Okay, Voss, If I created this game why don’t I know the rules, storyline or how to move to the next level?”

“Oh my god you're the first thing to get edited when I get out. Yes, access it.”

“No question found that matches your inquiry.”

“Ugh, okay, um, oh I got it. Where is the tutorial? There’s got to be one of those. And yes acces the damn FAQ!”

“Question found that best matches your inquiry. Question: Is there a tutorial for The Escape Train? Answer: Yes. Tutorial is found at the beginning of the game.”

“The hell it was. Voss, turn on the tutorial.”

“My apologies. User must return to the beginning to access the tutorial.”

“I’m at the beginning! I never left the freaking beginning!”

Gabby stared down the holographic man which was about as effective as one would expect it to be before she sighed. “The beginning. The beginning. That’s gotta mean something more that just this stupid train. Where would I have put it.” She glanced around until her eyes landed on the seat she had woken up in. Staring at it she walked towards it and sat down slowly as if the chair might bite her. “Tutorial.” Nothing. She looked up to Voss to find him gone but at least she could call him back. Or she hoped so. “Main menu.” Nothing. She pressed her finders into the worn armrest cushions and then did the same to the headrest in front of her. With a sigh she leaned her head back and closed her eyes.

“Welcome to the main menu.” She heard her own voice say in her mind. “Would you like to save your progress or reset the game?”

“Sorry, that is not an available feature at this time. Would you like to save your progress or reset the game?”

“Reset the game I guess.” Maybe I could at least start over with the tutorial.

Gabby was resisting the urge to curse at her own voice when oblivion consumed her.

Gabby woke with a crick in her neck and it didn’t take long to figure out why.

The sentence slowly scrolled across the monitor as it had done 100 times that day and the long haired woman sitting in front of it pushed away from her desk frustrated.

“Problems?” Aiden asked, leaning over to kiss her on the cheek.

“Yeah I can’t get the damn tutorial to activate,” Gabby said, rubbing her forehead.

“Why don’t you take a break? Let’s go get dinner.”

“Yeah I guess you’re right. I’ll come back with fresh eyes and take stock. I’m sure I'm missing something. Bright side, the virtual operator support system is working.”

“Oh nice. I have a fondness for Voss in particular. He’s quite handsome,” Aiden laughed, winking at her with the dark blue eyes she loved so much.

“Ugh, I should have never modeled him after you. Should have known it’d go to your head.” She turned the monitor off leaving the game stuck on the opening line and followed Aiden out of the room.

Moments after the lights went off the monitor turned itself back on. Its blue glow filled the room with shadows. Letters started rolling across the screen.

Okay, I’m at the beginning. Where’s my damn tutorial?

More stories from Leigh Ann Tuttle and writers in Fiction and other communities.