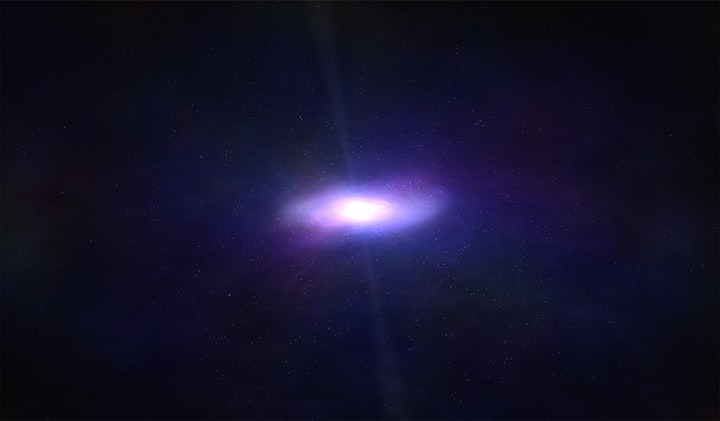 This wasn't screaming though, and they weren't carbon based lifeforms. Though they were birthed, made, constructed by humans, humans could never comprehend the ability for such beings to exist, let alone on how to properly live together with such creations. Now, there was only three landmarks all throughout the universe. The first being the dark little ball of dirt where their eggs had originated from, the second being the remains of the Quilter as not everything was torn to shreds by the blast of neutrinos, and third was this glowing spherical orb that radiated with energy, giving off both light and heat.

The two creatures that had acknowledged each other were growling and roaring, shaking the fabric of very existence themselves. Egging each other on into battle, they couldn't stand the existence of the other in their galaxy, let alone their universe. Lowering its head, the tachyon dragon proceeded to prepare for takeoff, meanwhile the photon dragon just remained in its position.

Then being blasted by a breath of a direct stream of electromagnetic radiation more condensed that the surface of the current sphere through a magnifying glass, a laser like stream of photons struck the armor of the tachyon dragon, catching it off guard. It being confused about the location of the photon dragon had left it out of tune with its instincts. With the breath stream knocking the tachyon dragon back to its senses, it turned to face its foe, infuriated.

The photon dragon was seemingly farther away than where it originally was when the two dragons were made aware of one another. It seemed that the photon dragon had either projected an image of itself to where it wanted to be, or that it transmuted its form back to that of invisible electromagnetic radiation before returning back to its dragonic state. It was as if the photon dragon was controlling its photons like a liquid, and it could melt down and reform at will.

The tachyon dragon now mad at being outplayed, especially by a being that it saw as keeping it encaged, remembering back the the photon gears that kept it as an egg, bellowed with all of its might. It faced the photon dragon, but it didn't rush towards it. Instead, it selected six other positions, perfectly angled from one another amongst all axis.

Feeling as if it were being underestimated by its opponent, the photon dragon let out another breath of concentrated photons in the direction of all seven images. Yet, they remained unaffected. The first attack hit since the tachyon dragon was confused, and perplexed. However with its new found focus, it seemed that it couldn't be touched. Thing is though, the tachyon dragon just moved from position to position so quickly that it was barely scathed by the photon dragon's breath, almost dodging them all perfectly.

Not knowing which one was real, the photon dragon struck out with its jaws, front claws, and rear tail, taking a hold of four of the images at slightly different time variations. Yet, the photon dragon still had three distinctly separate bites taken into it. The light composed beast crumbled, and breathed its breath stream into its held foe, blowing the tachyon dragon backwards.

Both of them wounded, bite marks, breath marks, and more to come, they stood apart. Rearing their necks back, they threw their heads at each other, sending shockwaves towards one another. Since photons and tachyons aren't composed of matter, their particles just moved between one another. Very few portions of their breath had particles collide with one another, but most of their breath actually passed right through, colliding with the other.

The photon dragon shrugging the blast off with its shoulder, and the tachyon dragon peeling back its armor that had been struck, neither dragon was willing to relent. Till, they felt something. It was the vector of the sphere, the orb. Its gravitational pulled had increased. Everything was seemingly becoming more condensed now than ever. The dragons though not contorted, were seeming to have the parts of their bodies closer to the sphere being stretched and elongated like strands of chewed bubble gum. Ascending in a direction further away from the pull of gravity, they rose to an elevation where their forms could easily be maintained.

Gravity compounded again. A low rumble shook them both. The dragons had turned their heads towards the luminous sphere. It was even more condensed now than ever, but this wasn't just any ball of light, this was a dwarf star. The last of the helios dragons that used to previously be a red giant was now that of a dwarf star. Sure, it may not have had the same potential chemical energy as before when it was a red giant, but the force of gravity it exuded was almost on par with that of a black hole.

Learning that they couldn't escape the pull of gravity no matter how far apart they would be if the dwarf star dragon were to collapse underneath its own weight, the two had decided to cast out this interloper once and for all. Just like two animals that are fighting in the wild trying to kill each other, when a third member joins the fray, the previously competing savage beasts will work together to expel an interloper.

Flying past each other, while striking one another whilst doing so, they flew to opposing hemispheres of the heliosphere that was the dwarf star. Roaring when in position, they tucked in their legs, pulled in their spines, raised their wings, and pushed off from the void into the crushing depths of gravitational force. Diving deep into the white hot core of the sun to reach its epicenter, they both reached the dragon in the center.

Like an embryo at the center of an egg, the ancient dwarf star dragon rested. Archaic to both dragons, and yet seemingly new at the same time, it opened its eyes to its assailants, as it lacked the energy to fight against its foes, let alone that of its own gravitational force.

Crashing in head first at a rate faster than the speed of light, both particle wavelength dragons sent a shockwave of near infinite mass into the only thing around them for lightyears that seemingly had any mass at all. Greater than the cataclysmic force of ten black holes put together, the dwarf star dragon existed in one moment, and was vaporized in the next.

Yet, the outcome of their actions hadn't resolved just yet. As they had sent the most amount of force into, and through, the only form of mass that surrounded them for lightyears. "For every action there is an equal and opposite reaction." Newton's third law came into play, and even these hypothetical creations of man were made subject to it. More devastating than a supernova, the vaporized dwarf star dragon proceeded to collapse on itself even further than it had before, pulling everything into itself. Both the tachyon and photon dragon, the remains of the Quilter, and even the poor amalgamation that those retched human beings called "earth." Just as everything came together to a finite point, it was all forced out faster than any being could comprehend. Things were resetting, restarting anew.

Just before the explosion of what remained though both dragons locked eyes on one another, not speaking, not roaring, not screeching, nor growling. The expression from the looks of their faces said it all.

The tachyon expressed to the photon, "I'll see you at the beginning."

The photon expressed to the tachyon, "And I will see you at the end."

Quarks, electrons, photons, neutrinos, and tachyons all scattered across the universe like a child's box of toys that spilling from a bucket rolling across the floor.

Somewhere, somewhen, an email popped up on a wristwatch as a couple was going on a walk. "Oh hey, Nikolai, check this out. I think somebody sent us something," she proceeded to scroll down the screen.

"I dunno," her voice trailed off, "but it's kind of got me interested."

He looked at her with a big smile on his face, "Scientific Method?"

"Scientific Method," she answered back.

They slapped a high-five into each other's hand and gripped onto it before yelling, "FUCK AROUND AND FIND OUT!"

More stories from Thavien Yliaster and writers in Fiction and other communities.