The Elevator to Everywhere

My daughter wrote this 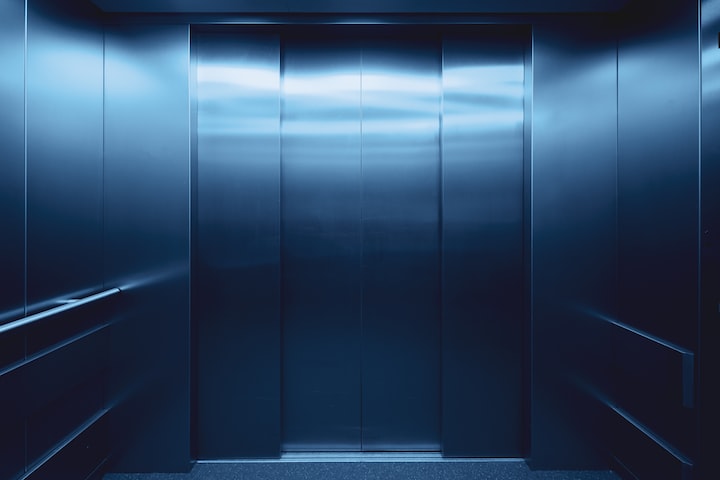 Photo by Bruno Kelzer on Unsplash

The Elevator to Everywhere

(a little bit of Mark Cieslak)

In the process of an Oscar-winning eye roll, she flushed with embarrassment caught acting like the fourteen-year-old she did not want to be.

However, his eyes did not judge from behind the reception desk. Instead, they were kind and warm with smiles around the edges. She felt childish but shed that skin as she walked the steps to present herself.

“Hi, I’m…” but she was cut off by his equally gentle voice.

“52?” and as she walked toward the elevator her voice bounced off the marble, “and it’s X.”

Stepping into the steel box, she punched a chewed-up fingernail into 52 which lit in satisfaction and the elevator announced her other prize.

Once alone, she completed her eyeroll. However, annoyed gave way to anxiety and again, she punished her fingernail for agreeing to meet with her father.

Five years is a long time.

She hummed vacantly along with The Girl from Ipanema, when the elevator announced her arrival to Olympus.

“Jesus,” she whispered as the doors opened.

His office was the entire floor.

X took a few beats to take in the realm. This man she barely knew. Who was he? Pretending to be?

X peered closely at the pictures nestled in between. The paintings, they weren’t idyllic scenes upon rivers. They were shadowed. Paintings of books barely opened, doorways haunted by light and empty places remembered at the wrong time.

Under other circumstances she would appreciate the forty-something angst on display, but she was still debating the next move.

She looked around the room and weighed her options. Sitting was a decision when making a statement.

The chair was watching her closely from the corner of her eye. She gave in and looked directly at the very important thing behind the desk and as a challenge she whispered, “bingo.”

The leather satisfied her with a sigh when she threw herself into her “Dad’s” chair. It felt electric to be sitting in the seat from which he chose to ignore her for the last five years. That moment lasted sufficiently and as much as she cherished it, the pain rose in time to match.

The moment grew too hot, and X stood and wandered, not admitting feelings.

She walked the room and glancing at the wall clock. Literally, the whole wall was numerals and hands of time. She got here at 2:15 as he requested.

It was 2:40 now. The very nice man downstairs said he would be right up.

What the…sigh. Why should he care about time now? Never did.

She unfolded herself into the leather couch away from the desk and chairs for his clients/victims and absently opened the magazine on the table.

The wall chimed. The wall with the clock. But it was 2:47. What clock chimes…eh, whatever. She went back to being annoyed.

At 2:55 she got up, done with pretending to be interested in the magazine. Absently she strolled by the big windows overlooking a city she didn’t know. She barely heard the sirens, 52 floors below. Leaning tight to the glass, X saw emergency vehicles. Something awful.

Time, so hugely displayed on the wall…ticked on. It was 3:30 and she was near making a decision when the elevator chimed arrival.

The doors parted as she held her breath. It was not her father. It was the nice gentleman from the reception desk below.

X tried to regain purchase on the moment that she just lost. Oh, she had waited so long for it.

She thought that was odd, a man such as him, so calm and almost regal otherwise.

Her brain finished the puzzle. Ambulances.

Without noticing, she had circled behind the desk and unceremoniously she fell into his chair.

She lowered her head onto her hands crossed on the desk and he excused himself, mumbling something else. She didn’t care.

More than anything, she felt cheated that she didn’t have the choice.

A hole opened within her chest which she stuffed anger into like so many times before.

It wasn’t fair. Nothing so far had been, but this wasn’t fair. She agreed to meet with him and decide on the terms of the rest of her life. To hate him, to forgive him, to understand him, to absolve, to forget.

Those were HER choices. Taken away.

In the middle of feeling little again, she heard the doors of the elevator slide open and the simultaneous announcing, Ding.

She lifted her head to consider the next visitor that was unwelcome into this uncertain moment of her life. None was there. The doors of the elevator just stood open, expectant.

The doors didn’t close and the light within wasn’t antiseptic white, it was asking her to join in softer vanilla.

So, in her haze of all the forty minutes and five years that passed, she stumbled into the elevator, one more means to escape. Once again. Life was uncomfortably washing over her. Hot, cold, forgotten, important, absent.

She reached to push the button for the lobby.

There was no such thing. In fact, there were no buttons at all, save one.

It was the only one on the panel. It read:

"Our lives are madness. Trying so hard to make moments, take moments. Nothing but pianos in a storm."

"I hear the singing."

More stories from Mark R. Cieslak and writers in Fiction and other communities.