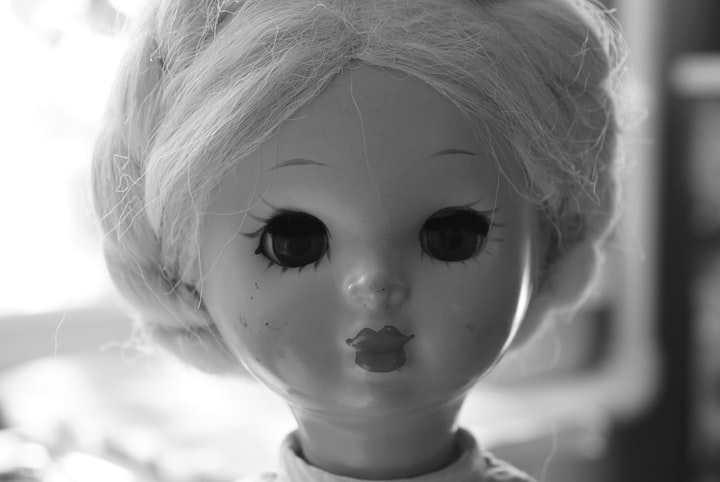 Photo by Anya Osintsova on Unsplash

Fred had bought the doll as a joke. It had been sitting there on a table at the flea market, one blinking eye half closed, hair matted, frilly dress stained. He’d taken one look at it and thought That doll is possessed.

So naturally he brought it home.

He thought it would be funny to creep out his girlfriend, Elsie. She disagreed.

“That thing is freaking me out,” Elsie said. “Get rid of it.”

“But Mommy,” Fred said in a high-pitched voice, waving the doll at her, “don’t you love me anymore?”

Fred just laughed and placed the doll prominently on the mantel.

“It’s an antique,” he said. “It’s probably worth some money.”

Elsie rolled her eyes and avoided looking at the fireplace.

Fred didn’t know if the doll was actually an antique. The man who had sold it to him had said it’d been in his family for ages. But the man didn’t exactly look on the level—his clothes were dingy, his teeth were yellow (half of them missing), and he smelled like a mix of fertilizer and alcohol. Even if the doll was a coveted antique, it was in no condition to be sold. It looked like the man had dug it out of the trash.

Fred only wanted to keep the doll around for Halloween to freak out some kids (and some of his friends).

Then he woke up one morning and found the doll sitting on the kitchen counter.

“Elsie!” he called up the stairs. “You’re real funny.”

Elsie had walked into the kitchen only to walk right back out again.

“You mean you didn’t put it there?”

Elsie stared at him, eyes wide. “I told you to burn it.”

But Elsie was running back up the stairs.

Fred put the doll back on the mantel. Elsie was trying to convince him to get rid of it. Of course, she’d moved it then pretended she hadn’t. After he put the doll down, he smelled his hand. It smelled like fertilizer. Yeah, this doll had definitely been fished out of the trash. He washed his hands and started making breakfast.

The next morning the doll was sitting outside his bedroom door.

“This isn’t funny, Fred,” Elsie said. “This was never funny.”

Elsie was a little too good at lying. He almost believed she wasn’t the one moving it.

Elsie stayed at her friend Susan’s house that night. Fred put the doll back on the mantel when she left.

He woke to find it on the nightstand, staring at him.

Fred was startled but then he laughed.

“Oh, ha, ha, Elsie.” He got up and looked around the house, expecting Elsie to be there, waiting to jump out and scare him. But she wasn’t there. He texted her, asking her when she’d come over to move the doll.

I didn’t move the doll, she texted back. I was at Susan’s the whole night.

Something clenched around Fred’s heart. Elsie was either a very good liar or…

He locked the doll in a trunk in the attic. Elsie would never find it there. So if it moved again, it wasn’t Elsie. But he told himself it was Elsie because there was no way the doll could move by itself. That kind of thing didn’t happen outside of movies and Stephen King novels.

Elsie stayed another night at Susan’s. Fred didn’t blame her. But the doll was locked away. No one else was around to see where he’d hid it. So it shouldn’t move.

Fred woke up to see the doll sitting on his pillow.

He didn’t scream. His body went cold and motionless instead. He made no noise.

When his heartbeat finally calmed down, he got up, grabbed the doll, and went downstairs to the fireplace.

He built a fire then did what Elsie had been telling him to do all this time. He tossed the doll into the flames.

He smelled the hair and fabric burning, the smoke overpowering. Then he smelled something else, something not coming from the fire. Fertilizer and alcohol.

A floorboard creaked behind him.

Fred realized, too late, who had been moving the doll.