by Katie about a month ago in Sci Fi
Report Story 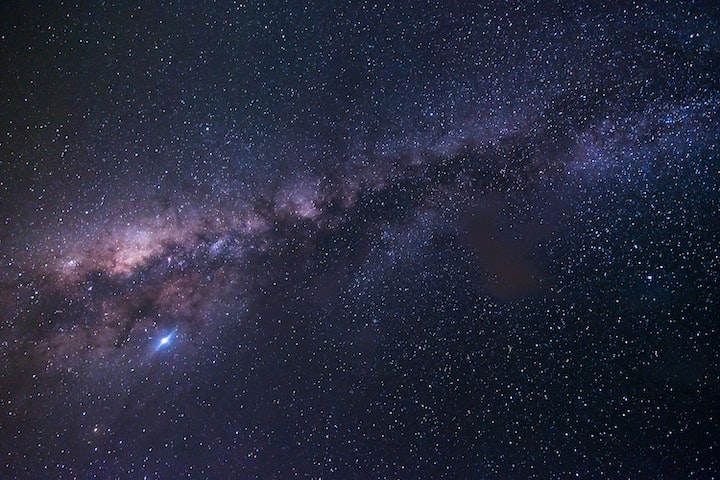 “Nobody, or no one?” He thought again as he starred out the portal window. The scene below hadn’t changed much. Most of the view being taken up with the large planet, that their craft was currently orbiting. Sometimes he couldn’t avoid the thought, the same thought, a question in his head really, “Are we just an expanding race, colonizing the galaxy, or are we a virus? Spreading across the cosmos.” Depending on his mood the answer to that question was sometimes “yes” to the latter.

They were out there, pushing the limits of where humans had previously explored. It would take three separate hops to even come close to returning to Spaceport One. Each hop taking two earth months in stasis. It had taken him weeks to recover from the last hop. His aging body betraying him, the shakes and nausea unrelenting. Dex had considered not making this push but they were short handed as it was so he had given in and joined the crew. Telling himself that this would be his last mission, again!

So far this planet looked very promising, all the parameters for sustainability were good. All the monitoring hadn’t shown any evidence of advanced technology. But all these checks being crossed off still didn’t mean that the planet would be suitable or allowable for colonization. The list was long, and all things carried weight when it came to this first step in approval.

Turning from the window Dex was surprised by the youngest member of the crew, a first timer whose name he could never remember, “fucking jump brain” he muttered under his breath. To her, he nodded, and was heading past but she looked like a question was on her lips. So he paused and smiling, asked her her name for the tenth time. “ Jupiter” she said, smiling at him genuinely. “ But Jup is just fine” “Jup it is then” replied Dex, trying to make a mental note of it. “ You have a question though, don’t you Jup?” He said, pushing the conversation forward. To that Jup totally transformed her demeanor and almost blushing, he was sure of it, said “yes I do, more of a favor actually”

Dex did a little pause, looking at Jup slightly sideways, and slowly, tentatively, said “ok, ask away” Well it turned out that she was just a little bit in awe of him, having never met someone with so many missions to their name. Jup just wanted some stories and he wasn’t one for denying anyone some well lubricated stories of his twenty or so different trips to all those exotic worlds. Besides, her enthusiasm was contagious, so they made plans to meet later in what everyone referred to as the lounge. A slightly off the books cargo area where crew were allowed to congregate socially.

Parting ways, Dex made his way forward. His meeting with the Captain was in thirty. They needed to go over the planet side excursion scheduled for the next day cycle. Dex’s conundrum of humanities role in the galaxy continued unabated in his head. “What right do we have to interfere with the natural evolution of any planet? “Regardless of how far it has evolved already.” These thoughts had slowly, over many missions taken root in his psyche. More and more he felt guilt over the many planets that he had had a hand in their assimilation. Into what had started to be loosely called “The Galactic Collective”

The first touchdowns on new worlds were always a combination of fear and excitement. This one was no different. Everything that the drones had sent back showed some amazing sights. A planet in simbiosis. Such a tempting sight for the planet hungry Collective. Dex and six others, Jup included, were going through pre launch decontamination. The UV lights doing their thing. Dex glanced over at Jup and she gave him a big smile and a wink, they had throughly enjoyed each other’s company the night before.

Soon they were loaded into the shuttle, which slipped silently away from the ship. For some reason Dex was having some last minute feelings of dread, a new, unsettling experience for him. Looking back at Jup the look on her face was one of abject terror. He kept telling himself that look was because of her being a rookie, but he didn’t believe that, not for a second.

More stories from Katie and writers in Fiction and other communities.