The D-Day Between August and September

by Alexandra Corlett 3 months ago in Short Story

A frozen pond amidst the summer heat. 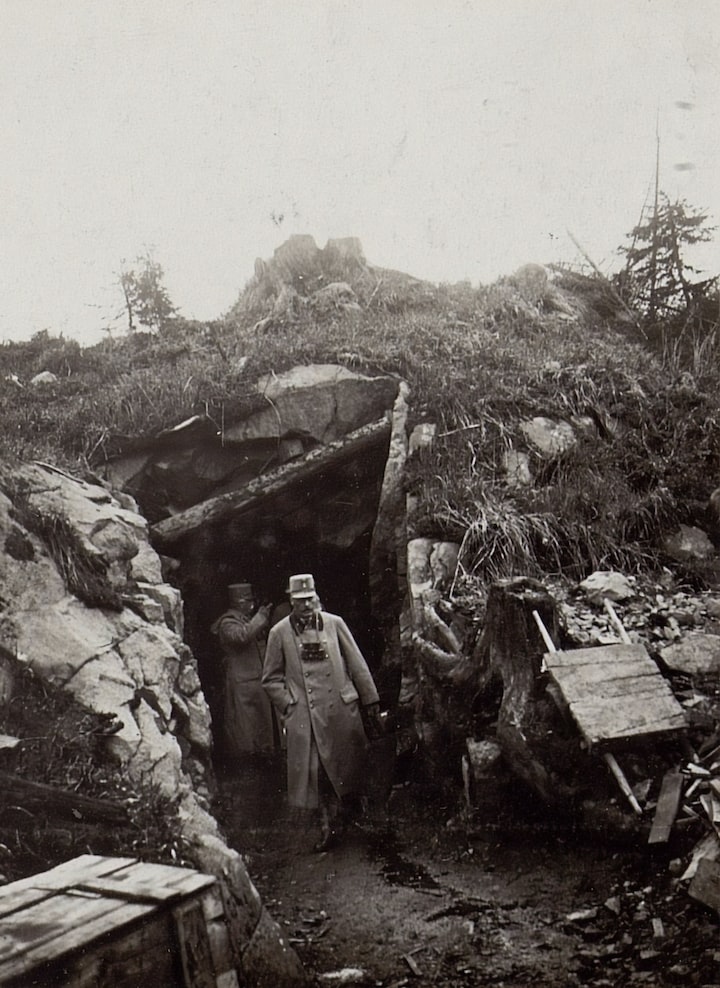 It’s a typical summer evening in Denver, Colorado. We’re sitting at a picnic table, Jed and I, on a restaurant patio under the sunset, eating sandwiches, enjoying the cool breath of the coming night. Jed’s talking about his family. I’m trying to pay attention, but these days my brain sort of shuts off whenever somebody says the word “family.” From what I can gather, it seems like he has a nice family; I haven’t met them yet, but it’s looking like that’s in the books. I’m worried it’ll make me sad, though, because it sounds like our families were similar before my grandma and my dad died.

Anyways, while Jed talks, my mind is miles away—in New York City, in fact; Central Park South, to be precise. I’m thinking about Holden Caulfield’s ducks. I think about his fixation on what happens to the ducks in Central Park during the winter when their pond freezes over, and I realize that I don’t know what happens to them, either. Holden wonders if somebody comes by in a truck to pick them up, which I doubt; he also suggests that they fly away, migrate south. That makes more sense, but I’m also pretty sure I’ve seen ducks hanging out near frozen ponds in the dead of winter before; not in New York, but—

I didn’t notice Jed stand up, but now he’s swinging one leg over the picnic table bench, making to leave.

“No, I didn’t,” I admit, rising to my feet uncertainly. “Where are we going?”

“Well, unless you also need to pee, we aren’t going anywhere,” he says through a sly half-smile.

I frown at him. “Oh.” I try to nonchalantly sit back down, but I almost miss the bench and have to grab the table to keep from falling over backwards.

“Don’t die,” he says with a chuckle. He knows I wasn’t listening to him. It’s okay, though, because that smile means whatever I just did makes up for my inattention. “All I said was that I’m going in to pee and wondered if you needed anything from the bar.”

He gives me a curt nod and says, “Back in a sec.” Then he turns and makes for the entrance to the restaurant. As soon as he reaches the door, I grab my purse and pull out my phone. I just have to know about those damn ducks.

The ducks in Central Park, it turns out, don’t really go anywhere. They stay in the Park, mostly, and seldom leave the greater New York City area. Apparently, they stay at whatever pond they call home as long as it remains unfrozen in places large enough for them to swim. But if it freezes over completely, they have to find another one that’s still partially liquid. If they can’t find one, they go to the Atlantic Ocean and wait until the ice melts. Usually it doesn’t get to that point, though—most winters, the ducks can find at least one body of water in the Park that isn’t frozen solid. Only during ghastly-cold winters, winters that go down in history as such, will they go to the ocean, which they still won’t do unless their prospects of survival in the Park are looking slim—that is, they don’t have enough fat on their bodies to sustain them while they wait for the ponds to melt. Some don’t make it, during those ghastly cold winters. They starve or freeze to death.

I’ve been reading a lot about World War II, so the ducks going from pond to pond makes me think of soldiers dashing from foxhole to foxhole just after D-Day, in 1944. That winter was one of those ghastly ones—especially in Europe. It snowed as early as September that year, hindering the progress of American troops through Germany’s manmade Hürtgen Forest. Come to think of it, the American troops in Germany that September were the 12th Infantry Regiment, amongst whom was Sergeant J. D. Salinger, author of The Catcher in the Rye.

“Everything bad happens in September,” I mutter, darkening the screen on my phone and dropping it back into my purse.

It’s mid-August right now. September is just around the bend. I look up at the sky and the setting sun is this neon lava color, dulled by a veil of wildfire smoke. The sky is the color of parchment. A year and a month ago, in September of 2020, the sky and the sun looked just like this, only, ten times more apocalyptic. Ash rained from the sky. We had to wear masks outside, not just because of the pandemic but because the air was almost unbreathable. That was in California, though, not Colorado. But if I woke from a coma today and all I saw was this sky, I’d probably think I was in California.

Jed returns and slides a glass of ice water across the table to me.

“Thanks,” I say, grabbing it and taking a few gracious gulps.

He sips his own glass of ice water, then picks up his sandwich. I realize I’d completely forgotten about my own sandwich in my obsession with the ducks, so I pick it up and take a bite.

Just then, that one song comes on over the restaurant speakers. “Is that—?” I point at the speakers, my mouth full of chicken sandwich. “What song is that?”

“Wake Me Up When September Ends,” Jed says. “Green Day.”

I frown, chewing a bite of sandwich and listening as the vocals come in—“Summer has come to pass…”

“You know what it’s about, right?” Jed asks.

I shake my head. “My dad loves Green Day.” Then I wave my hand in correction. “Sorry, loved Green Day.”

“It’s about his grandpa,” Jed explains. “His grandpa died in September. He wants to skip September so he doesn’t have to go through another anniversary of his grandpa’s death.”

I swallow the bite of chicken sandwich too early and it goes down slow, like an ostrich egg down a python’s gullet. I wonder if Jed can see the lump as it makes its way to my stomach. “No shit,” I say once the lump gets past my vocal cords, and it might’ve come out a little more vindictively than I intended.

I swallow again, clearing my throat. “My dad. My dad died in September.”

All of a sudden I get this feeling that everything is too good to be true. Since June, I’ve been hinged to this new, blissful reality in which I live in Colorado and have found new love and freedom; only, it seems like the hinge wasn’t meant to sustain the weight of my tragedies, and now the screws are popping out and the hinge is warping beyond repair; I look around for purchase, see the sky, and I’m thrown back to last September in California, when the sky was a different shade of parchment every day, to that day between my dad’s first day of hospice and the day he died—the day that the smoke was so thick that it blocked out the sun and I slept in until 11:30 AM because I thought it was still nighttime. I realize that the anniversary of that day, and, consequently, of my father’s death, is only a month away, and suddenly this new reality seems to be nothing but a rose-colored Listerine Strip, liable to melt at any moment—especially in the summer heat.

I stand up abruptly, world spinning.

“You okay?” Jed is coming around the table, I think, but I can’t see him too well.

I can’t see because it snowed last night and the whole forest is engulfed in a white fog; I’m half-frozen, and my eyes feel sleepy. Somewhere overhead I can hear engines and I’m sure we all stick out like sore thumbs against the snow, and even though I hear explosions in the treetops and my men are diving into foxholes, all I can do is listen to Holden Caulfield:

Every time I came to the end of a block and stepped off the goddam curb, I had this feeling that I’d never get to the other side of the street. I thought I’d just go down, down, down, and nobody’d ever see me again. Boy, did it scare me. You can’t imagine.

Then, somewhere far away, I’m thinking, “How did Caulfield do it? How did he manage to survive, even though his world was so damn sad and phony?”

Jed is holding my face. I can feel his hands, his energy seeping through his fingertips into my skin, but I’m still slipping—I’m cold, because now, I’m sitting on a bench in Central Park, staring at a frozen pond and hoping I’ll be able to say goodbye to my little sister before I die of pneumonia. And then I’m beside my little sister, leaning over our father’s body in the middle of September, holding my shaking hands under his nose to see if he’s still breathing while she tries to hook up the oxygen, but I’m distracted by his vacant, barren eyes and rail-thin frame—he is just skin stretched over bone, I discover, when he’s finally gone and I place my head on his hollow ribcage to absorb the last of his body heat. He was cold already, though, and he doesn’t warm me up much. Maybe it’s because I’m one of those goddamn ducks—one of the unlucky ones that didn’t make it to the Atlantic before the freeze, and now my body’s going to eat up its fat reserves until there’s nothing left but skin stretched over bone.

Oddly, this thought is the anchor I’m looking for. I grab it with both hands and, gradually, the spinning stops. I find myself in the snow by that frozen pond, waiting for death to seep into my bones, while Holden Caulfield does the same on the bench just a few yards away, and a twenty-something-year-old Sergeant Salinger does the same in a foxhole a few yards in the other direction.

But both Holden and Salinger survived. Holden kept right on moving when shit hit the fan, acting on impulse, doing what felt right and not doing what didn’t. Salinger did the same, by sitting underneath a table in the Hürtgen Forest, typing away on his typewriter while he and his men were under fire. Eventually, Holden got psychiatric help. Salinger found God in poetry and sex.

Can I survive? Maybe I am surviving. Have I found God?

I’m suddenly back in Denver, lying on my side on the patio. Jed is lying there with me, holding my face just like I thought, and everybody is standing around, staring and asking if we’re okay, but I ignore them because I can see Jed clearly now. I look deep into his bright brown eyes, and all I can see in there is pure compassion, and I realize that, indeed, I have found God—I just don’t call it that. My God is that branch of physics we don’t understand yet, the physics of the mind that allows me to pass between 1944, 2020, and 2021, like a shadow through glass. I’m not supposed to understand, I realize—I’m just supposed to survive, to be human.

“You okay?” Jed asks again with the slightest flicker of a smile.

Wanting to reflect his compassion, I smile broadly and place a hand on his cheek. With complete confidence, I say, “Absolutely dandy.”