The Crown of Flame: Prologue

by Marie Sinadjan 6 months ago in Fantasy
Report Story

The widowed queen of a vanquished kingdom seeks to reclaim what her family has lost and put an end to a prophesied war against the gods. 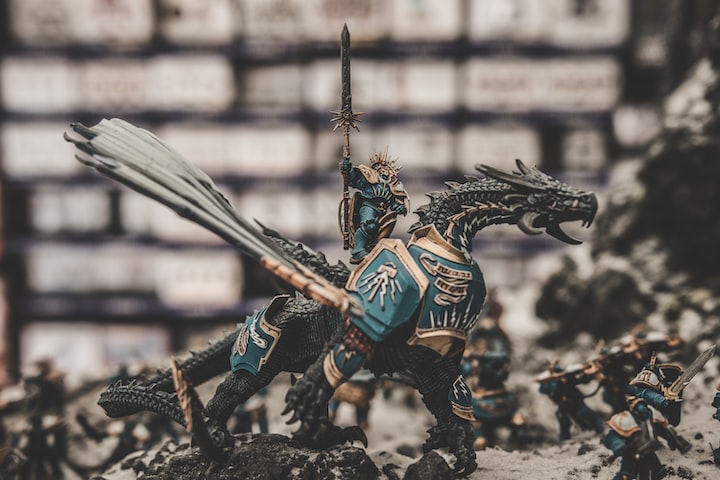 Photo by Jack B on Unsplash

"There weren't always dragons in the Valley."

She stared at nothing but the dying embers of the funeral pyre, yet she could already feel the old man's gaze on her. It was sharp enough to pierce a hole through the side of her head. And it was expectant. Hopeful, even.

She pursed her lips together and said nothing.

The scout continued on with his report, unaware of their silent exchange. The dragon sightings worried the townsfolk, and for good reason. Dragons were creatures of war. Without their Bonded, they were wild and dangerous. They listened to no one, and did whatever they pleased.

"That is of no concern to us." She cut off the scout's nervous ramblings with a whisper, yet he recoiled like she'd yelled at him. She didn't blame him. He was new, and he hadn't joined their ragtag band on his own accord. Or at least he wouldn't have, if he'd had any other means of survival.

The old man continued to watch her, even as he addressed the boy. "How many did they see? Two?" Always alert, always perceptive. Not too long ago he'd been one of their finest soldiers, leading armies to glory alongside her father, but the war had reduced him to a mere babysitter. Oh, how far they'd fallen. She'd set him free if she didn't need him so much, but after the war, she had nobody else she could trust.

The scout nodded. "A massive male with a golden spine, and a smaller one-"

"With red scales," the soldier finished.

She still refused to look at him.

Flames danced in her eyes as they remained fixed on the pyre. She stood so close to the still-burning heap that she should be warm if not sweating, but all she could feel was the cold. Years had passed, but she'd never been able to bury the memory of that last night, no matter how hard she tried. The ghosts of her past followed her with a single-minded devotion, and they always brought with them the storm. If she closed her eyes now, she'd be back on the palace balcony, snow falling in prelude to a beautiful tragedy. She would see the gates of their city fall. She would smell the smoke, and the pungent odor of charred flesh. She would hear the clash of steel and the screams of the dying, echoing all around her with no beginning and no end. She would feel his lips on her mouth, then taste iron.

And she would helplessly watch two pairs of giant wings disappear up into the sky, never to be seen again. They had lost the war and their kingdom, but that hadn't been the only consequence. Their dragons had abandoned them, too.

"You are her Bonded," the old man reminded. As if she needed any reminding.

But his baiting worked, for she turned sharply to the side to finally face him. Her face burned, though she felt none of the heat. Perhaps it was shame. "I was." She struggled to ignore the phantom faces lurking at the edges of her memories, yet she'd already cracked with those two words. Damn old fool. "What do you want me to do? We lost."

"Not all is lost," he corrected, a knowing gleam in his wise, experienced gaze. "Your brother-"

She flinched as though he'd stabbed her, taking a step back and wrapping her arms protectively around herself. "My brother is dead to me," she pronounced, but without any of the venom that would've indicated that she meant it.

And he knew that, for he smiled. He didn't press her any further though, smart enough to know when to walk away. "Dragons in the Valley," he murmured instead, turning his face up to the sky. "How peculiar."

She did the same, her eyes searching the vast expanse above them for traces of gold and rubies. "They don't like it here. The magic of the north makes them... uncomfortable." So why, then, had the dragons come?

She felt something stir in her chest. Was it hope? Was there a possibility of a second chance? Perhaps she could renew her Bond with Inanna. That had never happened before - because no one had fallen out of favor with a dragon and actually lived to tell the world about it - but what if she could?

"Matters only they know for certain, I presume."

She gave him a sidelong glance. "Would you Bond with one again? If you could?"

A small smile bloomed on his face, but it was sad. He'd lost his own dragon during the early stage of the invasion, and she could see that the loss still hurt him. Yet there was something else. She had a feeling it had to do with who the other dragon on the loose was. It took a king to Bond with a king, after all. And the last king had betrayed them.

"For you, and little Marc? I would." The old man didn't even have to think too hard on his answer.

She didn't like it, but she accepted his answer anyway. Perhaps this was why her brother hated her so. But were they truly so different, putting duty above themselves? That had been what they were taught. That had been how they were raised.

"Then we hunt." Authority returned easily to her voice, and she once more wore the mantle of queen like she'd never lost it. Old habits died hard, she supposed. Just like dragons. "We ride at first light."