by Chris Smith 10 months ago in Short Story
Report Story

The perfect day we ever had. 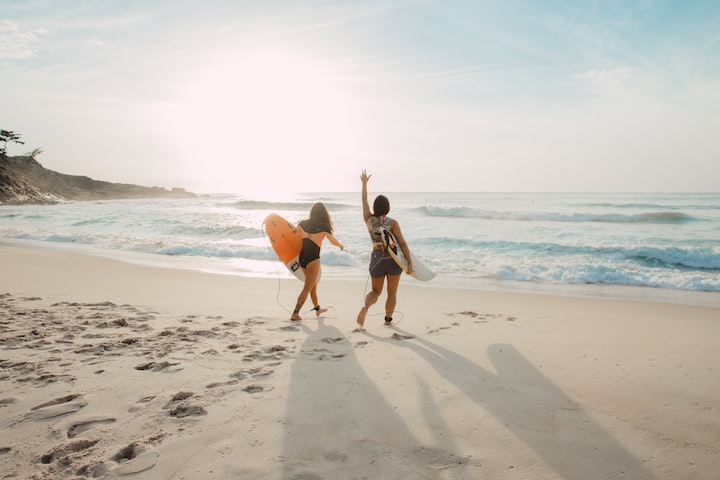 Photo by Elizeu Dias on Unsplash

There wasn’t a day that has gone by that we didn’t think about the day at the beach. I could describe it to you so vividly because I relive it every single day. The cotton candy sky reflected in my eyes as I stared out to the horizon. The smell of the salty ocean and the absurd amount of food stands that lined the beach infiltrated my nose every time I breathed in. Hot dogs and sea salt will be forever imprinted in my mind. So much so that I can no longer look at a hot dog stand the same anymore. But all of that is a small portion of my memory from that day.

Micah and Val met me down by the pier at sun up and brought three breakfast burritos that were the size of our heads. We watched as several other groups swam out to take their turn at the waves starting to crash. We knew that our moment would come and without a care in the world, we sat on the beach and caught up with one another as we had not been able to see each other in months. Micah had been in Tulum since Christmas and Val had been buried in research for her master’s degree. We’d all surfed along the coast separately in recent weeks just to flex that surf muscle. I still felt that I could’ve used some practice so I was a little bit nervous.

They assured me it’d be great and we’d all remember this weekend. The surf would be the best we ever had and probably ever will. I pulled the top half of my wet suit up and zipped everything in. Looked at the waves that had grown almost double in the last hour alone. They were crashing against the rocks like a raging bull. The crash almost mimicked a bull sneering as it charged through the streets in Spain.

We grabbed our boards and started our journey out into the line. When the surf is busy, you tend to line up and wait as others pick and choose the waves they want to ride in. I knew we’d get our golden waves if we were patient. And with the size of those burritos floating in our stomachs, we were okay to hang in line and wait. The bullish waves kept growing and crashing harder as we waited. We knew it was getting more and more dangerous as the waves grew.

Micah decided to take his run first, he attacked the incoming wave head-on. Val and I watched him dig in and pick up the wave and ride it nearly all the way into shore. He looked as if he had been riding waves his entire life when in reality we started surfing at the same exact time just three years ago.

Val went up next, she had surfed for a few more years longer than Micah and I - and picked a beautiful wave to ride. She lost her balance in the shallow water, making it nearly as far as Micah had. He met her at the shore and helped her bring her board into the sand.

I heard the sneering from the waves and felt the sun beating down on my neck. I needed to pick up a wave here any minute now. Taylor, a local, picked up a wave and it crashed before he really got going, so I watched as he paddled back into the line. He was with his family it seemed. And as I looked around I noticed that I was the only person out here that was still solo. Now was my chance to not only grab a wave but to also catch up with Micah and Val.

I saw a wave starting to form, and heard the wave starting to hiss as it approached. I turned and started to swim as hard as I could. I could feel my board calling to me, telling me to stand and ride. For once I listened to everything around me and jumped to my feet. It was a golden moment and it felt truly effortless. Like a cowboy riding a bucking bull, I rode the wave and whipped my board with complete control. This was the single greatest surfing moment in my life. I could see Micah and Val cheering me on, but all I could hear was the bull forcing me closer to the shore. It was raging and kicking while I was riding with a smile on my face. I’d never felt this confident on a board as I am right now. I was taking this moment in, listening to the sounds, smelling everything I possibly could, and watching as the water started to mellow out and settle into the shoreline. I purposely fell off my board and crashed into the water. It felt like the raging bull had calmed and had not given me a big embrace. Micah and Val came running into the water and met me as I started pulling my board in. They both hugged me and basically shook me to my core. “That was so awesome!” Val said. She hugged me tight as Micah grabbed my board from me. This raging bull was tamed by all three of us today.