The boy and dragon 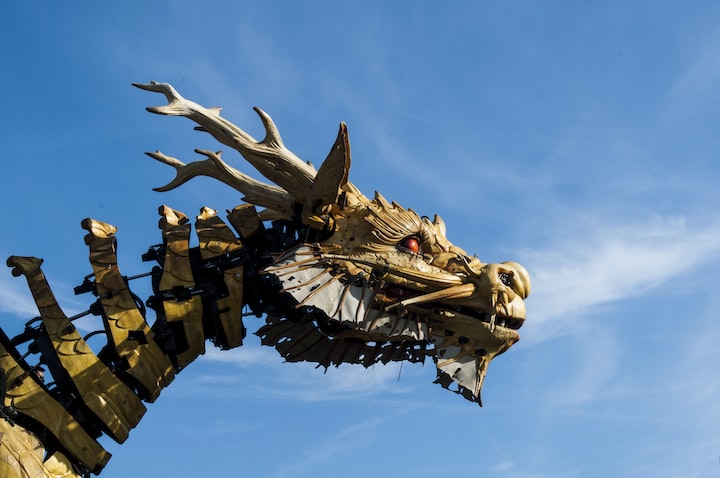 Photo by Emanuela Meli on Unsplash

The Black Dragon was a dragon who lived in the wastelands of the earth. He was a fierce warrior and a great hunter, but he also had a soft spot for children.

He roamed through the wastelands, slaying what prey he could find. Once in a while, he would come across a village or small town and would make his presence known by dropping fire from the sky, killing anyone inside it. This always caused panic among humans, who knew that this was only the beginning of their troubles.

The Black Dragon was relentless in his attacks on human settlements. He would attack and destroy entire towns before moving on to other cities or villages, leaving nothing behind but rubble and corpses.

One day, however, as he flew overhead into an isolated village called Itsura, something caught his eye: A little boy with bright red hair noticed him as well and began running away from him with his arms raised above him as if they were wings keeping him aloft. The boy ran faster than any mortal could ever hope to run; even dragons cannot match their speed. The boy flew through the air, just as if he were a dragon himself. He had never seen anything like this before; he was so taken aback by the sight that he lost his concentration and fell out of the sky, crashing down into a nearby field. The boy landed safely on the ground and looked around, confused. He had never seen a dragon before in his life, let alone one that could fly. The boy stood up and brushed himself off; he was surprised to find that there was no damage done to him by the fall. His parents would have scolded him for such clumsiness, but they were not there anymore; it had been years since they died in an accident caused by a stray fireball from an unknown source. The boy did not know where he was, or how to get back home. He began walking through the field, hoping that someone would come along and help him.

The boy walked for hours and hours, but no one came. He was beginning to get tired, so he decided to sit down on a rock and rest. Then, something caught his eye: high in the sky above him was a yellow dragon with blue scales and black wings. The dragon circled around the field once before landing gracefully next to him; it looked at the boy curiously and said “Hello there young one. What are you doing here?”The boy was surprised at how kind the dragon was, and he told him everything that had happened. The dragon listened carefully, nodding his head every now and then. When the boy was finished with his story, the dragon took a deep breath and said “Well, I think I can help you; do you want me to take you home?” The boy nodded and climbed onto the dragon’s back, holding on tight as the dragon took off into the air. He flew higher and higher until they were above the clouds; then he circled around once before heading in a straight line toward home.

The boy was so scared that he thought he might fall off, but the dragon held him tightly and flew faster than anything the boy had ever seen. The ground below them was getting closer and closer until they were right above their house. The dragon circled around once more, then swooped down toward the roof of the house. He landed softly on the shingles and slid down to where the boy’s mother was waiting for them. She ran out of the house and hugged her son, who was crying so hard that he couldn’t catch his breath.

“What happened? Where have you been? Why are you so late?” she asked him. The boy couldn’t answer; he just kept crying and hugging his mother tightly. The dragon looked at them both, then turned and flew away without saying anything.“ You must have been very scared,” said the boy’s mother. “What was it? A dragon? An ogre? What was chasing you that made you late for dinner?” “It was a robber,” the boy managed to say. “A big one. He had a knife and he wanted my money.” “But you didn’t have any money!” said the mother. “And anyway, why didn’t you run away from him?” “Because he would have killed me if I tried,” replied the boy. “Then why didn’t you fight back?” asked his mother. “All you had to do was use your magic and make him go away.” “I tried,” said the boy, crying again. “But he wouldn’t listen; he just kept coming after me with that knife of his.” “What did he look like?” asked the mother. “He was big,” said the boy, wiping his eyes with his sleeve. “And he was wearing a black coat and hat, but it wasn’t like any coat or hat I had ever seen before. It looked almost like feathers; it glistened in the sunlight when he moved around. And his eyes were very dark, almost black, and they looked at me as if they could see right through me—into my very soul!” The mother hugged her son again and kissed him on the cheek. “It’s all right now,” she said. “I promise you that I will take care of this man who tried to hurt you. Just try not to think about it anymore; let me handle things from here on out.”

HELP YOU WITH AMAZING GIFTS

More stories from Eikep and writers in Fiction and other communities.