A piece of the man I lost. 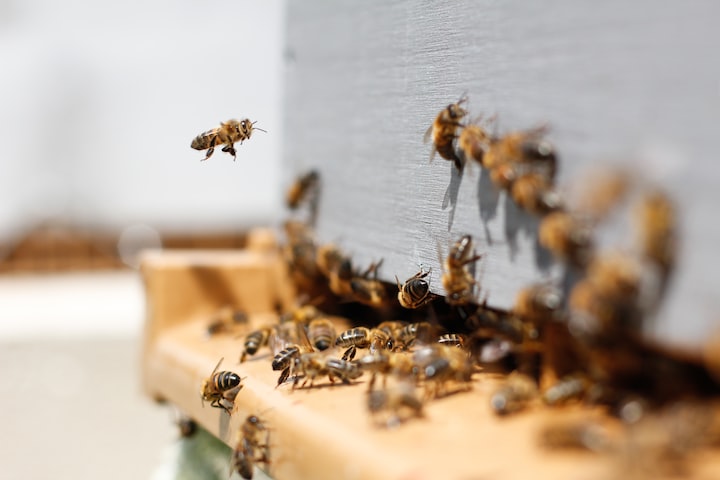 Photo by Damien TUPINIER on Unsplash

It had been seven months since the world dried up. Scientists said it would happen, but no one cared. The bees. The bees were gone, extinct, and we, the poor leftover species of the world, were left scavenging for food. Everyone said if bees were to disappear, the humans would lose apples, coffee, and a few other things. What we really lost were plants- all plants that provided food. I was one of the few who knew this would happen. I was a science teacher in the Oklahoma City Public School System, and I read much research on the topic. In the end, pesticides, drought, and global warming forced bees into extinction.

It had been three months since my husband, Daxton, died. I was the teacher, but he was the smart one. He could do anything. He was extremely intelligent and logical, he was good at sports, he was knowledgeable about medicine, food, politics, anything I threw at him. I’ve loved him every day for most of my life.

One day about two years ago, I was doing research on how to help the bee population thrive. I was sitting in the floor with papers, post its, and books covering our living room rug in front of the fireplace. Dax snuck up behind me and hooked a gold chain around my neck. I turned around to see his sly grin. His green eyes shone through his thinly rimmed glasses beaming with excitement. I held the necklace out from my chest to see it was a heart-shaped, gold locket. There was a bee engraved on the front with smooth black stripes and curly wings. I opened the locket expecting to see a photo, but instead I saw a message: Don’t worry, this bee will always be with you.

I leaned my head back to rest on his chest, and for a moment, I was relaxed. He had that effect on me. He held me down to Earth.

I wore the locket every day until the panic when it was lost. Once the world ran out of food, the world became a desolate and violent place practically overnight. People were starving and killing each other over what was left. Many left to find food somewhere else. I headed for the mountainous areas of southwestern Oklahoma alone.

Every day, I walked in search of food. It was hard to live without Dax. He was interested in survival, and he would have been good at this. Honestly, if it wasn’t for his bug out bag he kept in the closet, I probably wouldn’t have survived the first week. When I heard others approaching me, I hid. I didn’t trust anyone.

One morning, I was on a food run, and I heard a group of people heading in my direction. I ducked into the brush off the road. I watched them pass through the trees. There were four of them, two women, a man, and a girl. They had very modest clothing. The women and the girl wore long, bland dresses with sleeves, and the man wore long sleeves and pants. The only skin I could see were their heads. They were all quite messy and unkempt. The women and the girl had very long hair. They were all singing “How Great Thou Art.”

Oh no. People had to be careful with religious groups. There had been many radical religious groups who had been poisoning the bees. They kept saying that God would feed the world or something like that. They thought humans shouldn’t be dependent on an insect.

The girl couldn’t have been more than seven. I felt sorry for her growing up with these people as teachers until a bright glimmer caught my eye. The sun was reflecting off of her necklace. As they passed in front of me, I could see them more clearly. My bee locket! The little girl was wearing my bee locket! I almost dropped my bag in shock. I clutched it keep from making noise. I didn’t know these people or what they were capable of.

I decided I had to get my locket back. Dax gave it to me. I decided to follow them. I stayed at least twenty-five feet behind them, so they wouldn’t hear my footsteps. I followed them down the road to a small cabin. I watched them through the windows with the binoculars Dax kept in the bug out bag. The girl’s room was on the left side off the living room. The man and younger woman seemed to be a couple. They slept next door, and the other woman’s room was on the right side behind the kitchen. I waited until they were all asleep. I gently opened the girl’s window and crawled in. I squatted down by the bare mattress where she slept. I slowly unclasped the necklace and slipped it away from her. I couldn’t help but smile. I put it in my pocket and turned toward the window. There standing in front of me was the larger woman.

She looked down at me with an almost evil look. She has a wooden walking stick in her hand. I knew I had to get out of there. Before I could plan my move to escape, she screamed, “Punishment to Trespassers!” She lunged at me with the stick. I dove to the side of the room as I heard the wind from the stick by my face. She yelled again, “Smite the Immoral!” As she raised the stick, I grabbed it and pushed it to her neck as hard as I could. I knew if I could weaken her, I could escape. I was small and quick.

I gasped. I felt a sharp pain in my upper back. Things began to look blurry. I turn around and there was the girl holding a bloody kitchen knife, her face as calm as a sleeping baby. I fall to my knees and to the floor on my side. My hand clutches the bee locket.

As my last words left my lips, I finally got it. The locket didn’t help the bees. It didn’t help scientific research. It helped me get back to him. The locket brought Dax and me back together in death. It gave me back my love.